TRUSSVILLE — The plan to revitalize downtown Trussville is coming along and work is on schedule.

Mayor Buddy Choat said there was a concern after weeks of inclement weather that the work could be delayed. But as of April, contractors and crews are meeting deadlines for the major redevelopment project.

Highlights of the plan include new sidewalks with brick dividers, a pavilion and amphitheater, street lighting, landscaping and public parking. There will eventually be a brick plaza that Choat called the “signature of downtown revitalization.” 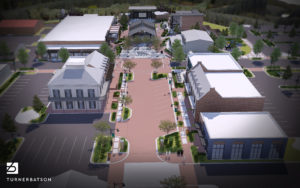 The Trussville Redevelopment Authority has been working with the city on the master plan. The city wants to bring in new businesses and restaurants and make the downtown district more friendly for drivers and pedestrians. TRA is a separately incorporated body that partners with the city to promote trade, commerce and employment opportunities.

“It’s a nice entity to have and they’re still working on downtown and they are working on bringing in income with other properties,” Choat said.

The city has partnered with TRA in numerous ways since downtown redevelopment has been underway.

As for progress being made in downtown, Trussville Utilities is putting in gas and water lines. Sewer lines are also being installed. Choat said the city could start on the parking lot behind the Elite Jewelry building and next to the Fresh Value Shopping Center within the next few weeks.

“This is all the horizontal stuff as they call it,” Choat said. “This is the parking, the streets, the infrastructure. It’s not very pretty but it is showing progress.”

Work is also being performed on Cedar Lane and Morrow Avenue.

With more and more businesses setting their sights on locations in downtown Trussville, the process can be expected to continue into the foreseeable future.