Specifically, he needs more educators who are certified in the subjects they’re teaching. But during a teacher shortage that some say has reached a crisis level in parts of the state, Marcum and others hope lawmakers will let them keep non-certified educators in their classrooms longer.

“The education colleges are turning out great teachers, just not enough of them,” Marcum said on Friday. “Even if we hired all of them, it wouldn’t be enough.”

Secondary math and science spots have been difficult to fill for years. 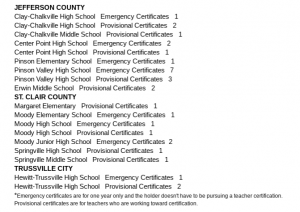 Senate Bill 304 would change the word “emergency” to “urgent” and allow the contracts for up to six years.

His bill will make it easier for professionals with real-world experience and ability, but not a certificate, teach for longer, Chambliss said.

In the 2017-2018 school year, more than 1,700 teachers in grades 7 – 12 were not certified to teach the English, math, social studies, science or special education classes they were assigned, according to information from the School Superintendents of Alabama. Some of those teachers may have a one-year emergency certificate or  are “teaching out of field,” meaning they’re certified in other subjects.

Meanwhile, there are fewer young educators entering classrooms. The number of new teachers coming out of colleges and programs in Alabama fell by about 40 percent between 2010-2011 and 2015-2016, according to the latest available federal data.

“If we had plenty of teachers through the traditional path, we probably wouldn’t be talking about this right now,” Chambliss said.

Educators are talking about the shortage. Early this year, a task force was put together by State Superintendent Eric Mackey to look at the reasons for the teacher shortage and possible solutions. He supports Chambliss’ bill.

“We are very much in favor of this progressive move that would allow individuals who obtain a teaching job — but who do not have a teacher certificate — to begin work,” Mackey said last week. “This is a bill that we have pursued due to the extreme teacher shortage in the state. All teachers would still be subject to background checks, and they would have to earn a position in a local school system in order to qualify.

“The bill moves the one-year certificate to two years, but it does allow for additional certificates to be issued on a case-by-case basis. This bill meets an immediate need, but it is only a partial solution, and much more work is being undertaken in order to recruit quality teachers into our classrooms.”

Ryan Hollingsworth, executive director of School Superintendents of Alabama, said one-year isn’t enough time for someone to get certified and the current rule contributes to schools’ turnover rates.

“[Senate Bill 304] takes care of that,” Hollingsworth said. “That language would help as we’re working with someone who is seeking an alternative certification.”

In the House, Education Policy Committee chairwoman Terri Collins, R-Decatur, said she hadn’t yet seen the bill, but if the emergency certificates were extended to up to six years, she’d like to see those educators working toward certification.

“That is the goal, to have as many highly-qualified, highly-effective teachers as possible,” she said.

Collins also said she’d like to see the state do more to make it easier for teachers certified in other states to get certified in Alabama.

“At a time when we are facing a teacher shortage, not just in Alabama but nationally, local systems have to use every resource available to make certain Alabama students are receiving the best education possible,” AEA President Sherry Tucker said in a written statement to Alabama Daily News. “And with the extreme shortage of math and science teachers, the emergency certificate allows local systems to bring in engineers, biologists and other professionals to fill the gap when there is no certified teacher available. (The AEA) applauds Sen. Chambliss in recognizing this issue and taking steps to ensure Alabama students retain those teachers who may not have been originally called to teaching, but have found their way to the profession and excel in it.”

Marcum, the Roanoke superintendent, is chairman of the teacher shortage task force. He and others are also hopeful about some other legislation in the State House that they think could help attract and retain teachers.

A 4 percent pay raise for educators is expected this year. And last week, a bill to increase the retirement benefits for new teachers was approved in a House committee.