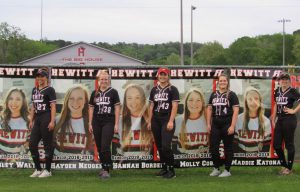 Coach Taylor Burt’s team would break the game open in the third inning with five runs. Molly Cobb doubled with one out to score Cahalan and Rubie Simon. Crystal Maze followed with a home run to right to extend the lead to 5-0. Finally, Rylee Tyree added a RBI single for the final run of the inning. HT would add five more runs in the 4th inning to secure a run-rule victory.

The Huskies had their final home game of the season Tuesday at 5:30. The Huskies soundly defeated Prattville.

Five seniors were honored on the field before the game:

The Huskies went on to dominate the entire game against Prattville, starting with Hannah Borden hitting a home run in the bottom of the first and scoring two runs.

Hayden Neugent took the win for the Huskies. She pitched five innings and allowed only one run on two hits. Neugent struck out 10 and walked one.

Melissa Townsend had the mound for Prattville. She pitched for one inning and gave up six runs on six hits. Townsend struck out two and walked one. Kaelyn Campbell pitched three and a third innings for Prattville.

Molly Cobb gave the Huskies their second homer in the second inning.

The Huskies hit well on Tuesday. Hannah Dorsett, Crystal Maze, Kenleigh Cahalan, Cobb and Anyce Harvey all had multiple hits for the Huskies.