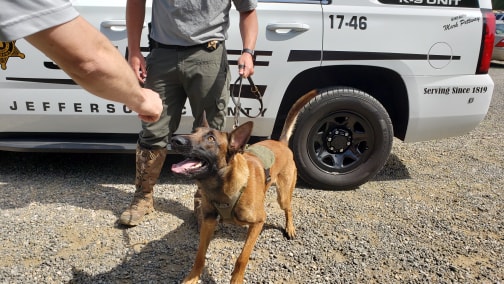 JEFFERSON COUNTY — Many of us enjoy rewarding ourselves for a job well done. Whether it’s a new outfit, a nice dinner or just putting our paycheck in the bank, we work for something. But for some of our hardest-working officers in Jefferson County, it’s all for nothing more than a piece of PVC pipe. 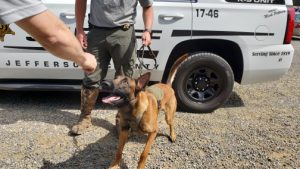 These dogs train day in and day out to stay focused on their mission: to keep crime at bay. But they have no idea what impact they are making.

The same could be said for the woman in charge of making sure all the pups are minding their p’s and q’s. With a strong, southern accent, and a walk with a purpose, you can rest assured Sweet Davis, of the Central Alabama Police K9 Training Center, means business.

Davis has been training Jefferson County K9 cops for nearly five years. It’s more than a job for her, it’s a dream come true.

“I used to sit in front of the TV when I was little and watch all the little police dogs I could watch on TV…I always wanted to do dogs all my life. I even dreamed about it,” David said.

As soon as Davis was old enough, she packed up and headed to Germany to learn how to train police dogs. When she came back to the states, her hometown police department helped her get going.

“I got back and got with my local law enforcement, the Maplesville Police Department,” Davis said. “They sent me to K9 school. When I got out of there, I trained all the dogs for about 10 years for nothing, just free. Then I thought, ‘Well, this job’s getting very expensive,’ so then, at that time, I started charging.”

Since Davis started her business, she said it’s all she thinks about. 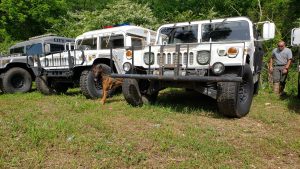 The dogs are trained in narcotics, patrol, tracking and bomb detection.

For certification for the dogs trained to sniff out drugs, the Jefferson County Sheriff’s Office gets a license from the Drug Enforcement Administration for illegal drugs including cocaine, heroin, methamphetamine, Marijuana, ecstasy and some synthetic drugs.

Before the DEA sends the drugs for training, they test them to make sure they do not contain any other substances such as fentanyl, which could be extremely dangerous for dogs to come in contact with. The drugs are packaged tightly and placed into locked boxes until they are brought out to be used. While the drugs are on loan, the DEA has the right to audit the sheriff’s office at any time to ensure none of the drugs are removed during training. 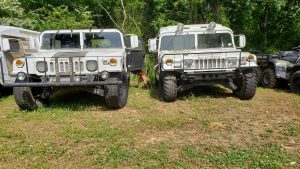 After months of training, it’s time for the certification test. Davis strategically hides the drugs inside a building and in and around vehicles at the training center. The dogs are brought in and must alert to what they find.

Cpl. Chad King, a K9 officer handler, has been through the training and said the dogs and their handlers must complete several courses.

When they do find a drug, the dog must alert. There are several different indications including barking, scratching, sitting and pointing. After giving the alert, the dog is rewarded with a toy. For Jefferson County, those toys include burlap, rope, a pillow and in one case, a simple PVC pipe. Although it doesn’t seem like much, to the dog the reward is a sign it has pleased its handler. The dogs are not regularly given toys, so when they get something to play with, it’s very special. This is how the handlers ensure the dogs take their jobs seriously. 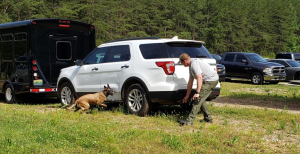 Once the certification process is complete, training isn’t over. The K9s must undergo 16 hours per month of maintenance training.

Sweet Davis said her job is never-ending, but she loves doing it.

“You have to love this,” she said. “I love dogs, so it’s a lot of hard work, but you’ve got to love it. The hardest thing I had when I started was I loved the dogs so much I got attached to them. What made me give them up and feel good about it was each time I knew the dog was going to a police department and was going to get the best food, going to get to ride and do his job that he loved every day for life. That’s what that dog lives for.”

And it’s a “sweet” life if you ask Sweet Davis.

“If you put him in a kennel and he’s a working dog, he’ll whine,” Davis said. “He wants to go to work. The only thing he’s working for is his toy. For us, it’s a paycheck, but to him, his toy’s his paycheck!”

This certification process is done once a year in Jefferson County. Several municipalities from across the state come to participate. As for maintenance training, Jefferson County, Trussville, Walker County and Jasper K9 officers regularly participate. 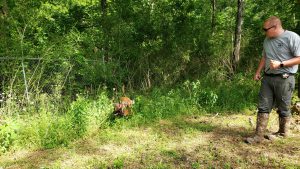 K9 handlers are encouraged to keep their dogs with them 24/7. Officers are on call and can be sent out to a call at a moment’s notice. But if you see one of them out and about, trainers recommend you ask the handler before approaching the K9. Jefferson County doesn’t have dogs that are trained to bite, but just like any animal, something could trigger an aggressive response.

These dogs are more than pets to the officers. They are truly partners in fighting crime. Once an officer becomes a K9 handler, they will likely stay with a dog throughout their career, if they choose to do so.

Davis also trains service and therapy dogs, and show and competition dogs for civilians. When it comes to teaching, Davis said it is rare that she has issues.

“The Lord has gifted me,” she said. “I can look at a dog and read a dog. I can just look at it and know just like the dog’s talking to me. I know what the dog needs. If I do have a problem, I go home and like I said, God gave me this gift, I’ll dream how to fix that dog and next thing I’ll do is go fix that dog. I’ve been like that all my life.”

Davis trains all breeds of dogs, but if you are looking for an appointment, it could be a while. There is a waiting list. You can visit www.centralalabamapolicek9 for more information.