Posted By: Trussville Tribune staffon: May 08, 2019In: Sports
Print Email

TRUSSVILLE — For Hewitt-Trussville senior Lily McCormick, lacrosse is a sport that has provided fulfillment for several years and will likely be a large part of her life for years to come.

McCormick took up lacrosse when she was in the fifth grade, and she has never looked back. She has played on the high school team since she was in eighth grade, and when she starts attending classes at the Savanah College of Art and Design, she will be doing so, in part at least, thanks to an athletic scholarship for lacrosse.

That level of success does not come without sacrifice. 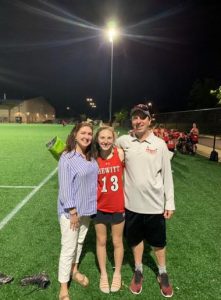 “She puts in a bunch of time,” said head coach Tom McCormick. “One on one with the ball and the wall. Additionally, she travels to play for a team out of Atlanta and Ohio. This last summer she played in Virginia, Florida, and Pennsylvania. She participated in a speed and agility camp for several mornings a week for all of the long hot summer.”

One of the benefits of participating in sports is that it tends to build characteristics that can serve a person for an entire lifetime; characteristics such as perseverance, loyalty and leadership.

“She is a vocal leader on and off the field,” said McCormick. “She encourages all her teammates and loves to celebrate when a player gets her first goal ever! She brings the work ethic and a bunch of knowledge to the game of lacrosse. She holds the Trussville record for most goals, 217 in high school or 52 in a season or 12 in one game. Even more impressive, she has the record for the most assists with 21 in a season!”

Her time in lacrosse has also led to her growth as an individual, as well as a player.

“She has matured and just grown,” said McCormick. “Stronger, faster and better at the draw. Lily has grown from a kid to a young lady.”

McCormick plans on attending the Savanah College of Art and Design where she will major in film and writing.

She has three scholarships: