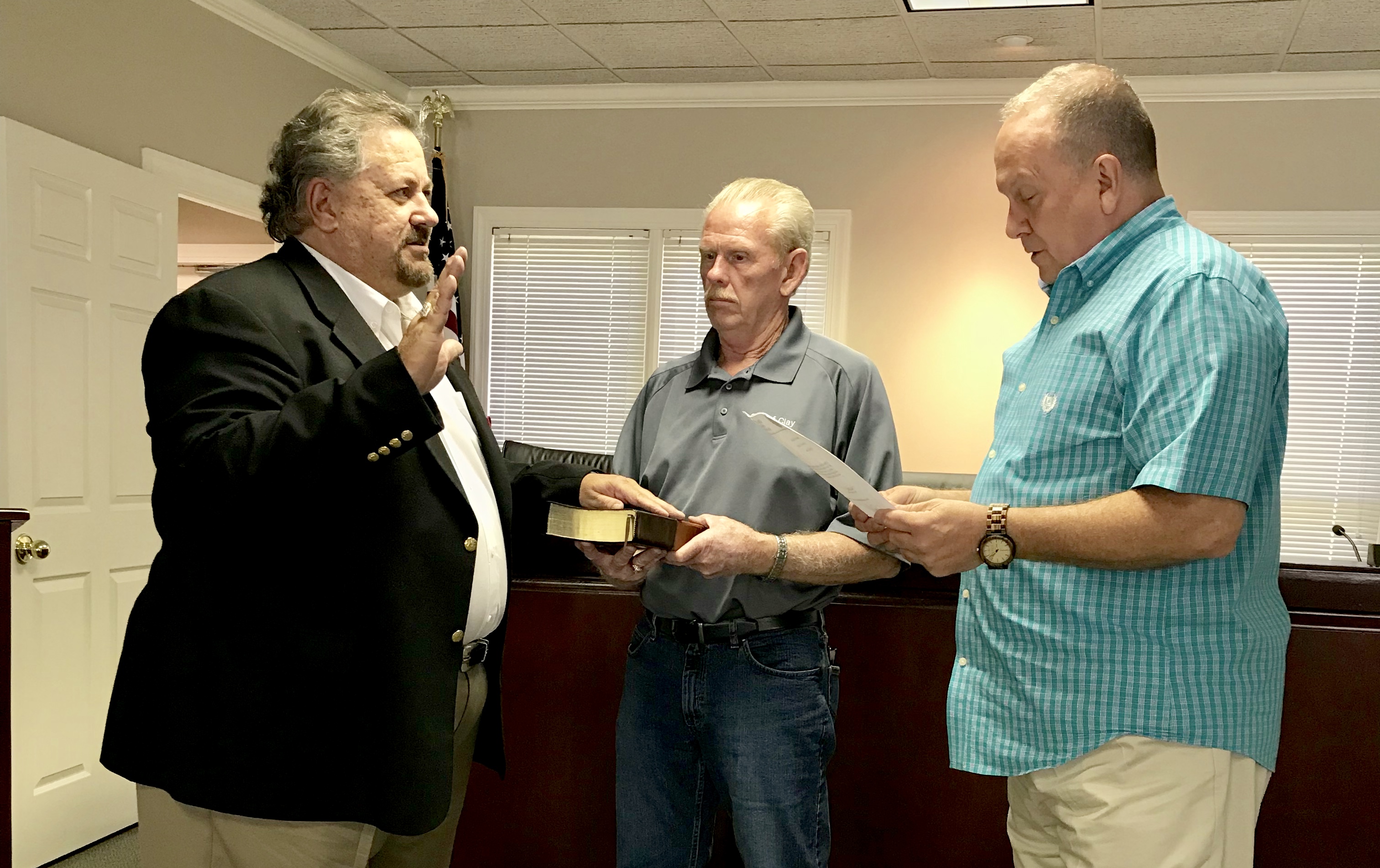 Posted By: Crystal McGoughon: May 14, 2019In: Local News
Print Email

CLAY – During its pre-council session on Tuesday, May 14, 2019, the Clay City Council swore in Councilman Dean Kirkner, who will be filling the position of Place 2 on the city council, previously held by Don Baker, for the remainder of the council’s term. 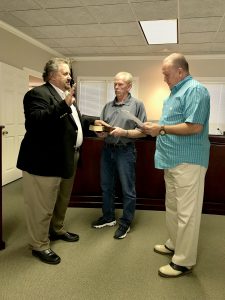 Kirkner previously served on the council from 2000-2008, holding the position of City Council President/Mayor Pro Tempore from 2004-2008.

“I feel good about it,” Kirkner said of being back on the council. “I feel qualified. They needed someone to fill in, at least for this last year-plus of the vacated term by Mr. Baker. I was glad to come back and help, knock the rust off a little bit, if you will.”

The next election will be held in 2020, and when asked whether or not he plans to run for city council again, Kirkner said, “Ask me this time next year.”

“We want to welcome Dean as part of our council for tonight,” said Mayor Charles Webster. “Thank you for serving with us. Look forward to it.”

City Manager Ronnie Dixon announced during pre-council that Clay City Fest will be held on Friday, July 5, from 6 p.m. to 9 p.m., at the Clay-Chalkville High School football field. The event will include local entertainment, bounce houses, food trucks and a firework show.

“At nine o’clock, we’ll have a firework show,” Dixon said. “It will be done by the same people that do Thunder on the Mountain the night before. The mayor, this is something that he wants to do and build it into something bigger.”

Tony Berenotto, commander of The American Legion Post 205 (East Jefferson County), gave the council an update on the new Legion post, which is based out of Clay.

“It is named after Staff Sgt. Michael Wesley Hosey, who everybody here, I think, knows was a Clay-Chalkville High School student and resident that we lost in Afghanistan,” Berenotto said. “His father and family have given us permission to name the post after him and we’re very honored to have done that.”

“Just to give you a quick update, we have partially moved into the old library (the historic Jayford Ware house),” Berenotto said. “Just some furniture that has been donated to the post at this time. It’s not being used operationally yet. As some of you know, we are continuing to meet at the Cosby Lake community building at this time because it has room for 40 members.”

Berenotto said that once some basic renovations have been done, Post 205 plans to make the Jayford Ware house, which was the former location of the Clay Public Library, its post home. The post will use the building for its offices and administrative business, as well as holding smaller meetings such as executive committee meetings. Post 205 may also use the location to host events, however the rooms in the house are not large enough to house regular meetings, so the post will continue to hold its meetings at other locations.

A bid opening for the construction of a tennis and pickleball facility was also on Tuesday night’s agenda, but the city received no responses to the 18 bid requests it sent out.

“We will continue on with the construction of our tennis/pickleball facility with the city acting as the general contractor,” Dixon said. “We’ll have a budget of $350,000 to do that. If it doesn’t rain us out, we should be finished before school starts again. It’s something that the kids at the high school have wanted since 1996…so it’ll benefit the school and the community.”

In other city news, the council passed three resolutions:

•Resolution 2019-07, awarding a bid for the demolition of unsafe buildings/structures at 7153 Cabin Lane to Milam and Company for the amount of $8,800.

•Clay Elementary – Christina Sutton will use her funds to purchase books for the school media center; specifically two copies of books from Newbery, Caldecott and Coretta Scott King award winning and honor books.

•CCMS – Tina Hamrick, Family and Consumer Science teacher, will use the funds to purchase Chromebooks and/or foot pedal/power supplies for sewing machines.

•CCHS – The award winner for the high school is Principal Michael Lee.

“Normally we do the principals in May,” Locke said. “We’re going to go ahead do Mr. Lee for April, and then if he gets me an applicant for May, we’ll turn that one through for next month.”