Posted By: Trussville Tribune staffon: May 21, 2019In: Sports
Print Email

CLAY — Years of hard work and sacrifice paid off for Clay-Chalkville High School student-athlete Jacob Williams when he signed to wrestle with Truett McConnel University Friday, May 7.

“I got into wrestling after I was getting bullied in school,” said Williams. “It definitely helped me learn how to defend myself, and it made me bold enough to stand up for myself.”

The circumstances that led Williams to wrestle are common enough; however, following through with the choice takes more than just desire. Success in this arena requires discipline, drive and sacrifice. 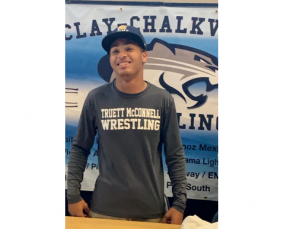 “I really feel like I sacrificed my body a lot when it comes down to wrestling,” said Williams. “I’ve had concussions, neck injuries, and two torn tendons in both my shoulders.”

Wrestling for a college is not the only reward for Williams’ efforts. Wrestling has given him much more than just that; gifts that will be with him throughout his lifetime.

“I like wrestling because it made me who I am today,” said Williams. “It taught me how to channel my anger and to take it out on the mat and not in the school. Wrestling really made me a man.

“Wrestling really made me a leader. It taught me that every person is very different and that others need time to develop, so I stay after practice to help others who are trying to get better. Going away from sports, I’ve learned how to help others with they’re problems by talking things out and really being able to listen. Wrestling really makes me feel like I am a very dependable person.”

A wrestler may be alone with his opponent at matches, but the journey there was filled with a vast support system.

“My family, friends and coaches have all been there for me every step of the way,” said Williams. “I would not be the person I am today if it was not for the wonderful group of people who have always kept my head up through the rough times in my life. My mom and my head wrestling coach were my biggest supporters in my season and life.”

Williams is as ready as he can be for his college career, but there is always going to be a bit of nervous anticipation around such an important life step.

“Although I’m a bit nervous, I am also very excited about becoming a student-athlete,” said Williams. “I’ve dreamt all my middle school and high school years that I was going to be a college wrestler. I couldn’t even explain to you how happy I am that my dreams are coming true.”

Once he starts at Truett McConnel University, Williams knows exactly what path he wants to take.

“Besides being a tough guy with wrestling and all, I actually have a very soft spot for animals,” said Williams. “I’ve always loved the rescuing of animals and saving their lives. Going into Truett, I will be majoring in biology to (later) pursue a degree to become a veterinarian.”

It seems almost certain that Williams will reach these goals, and what he has learned from wrestling are the same skills that will take him there.

“After being bullied in middle school, it really made me push to be the very best I can be,” said Williams. “Hard hours in the gym and staying late after practice to run and work on my technique (were) some things that I felt like I had to do on my own to be the best wrestler I could be. I’ve always told myself I got to keep working because someone out there is going to try to bully you again, and you have to be ready.”