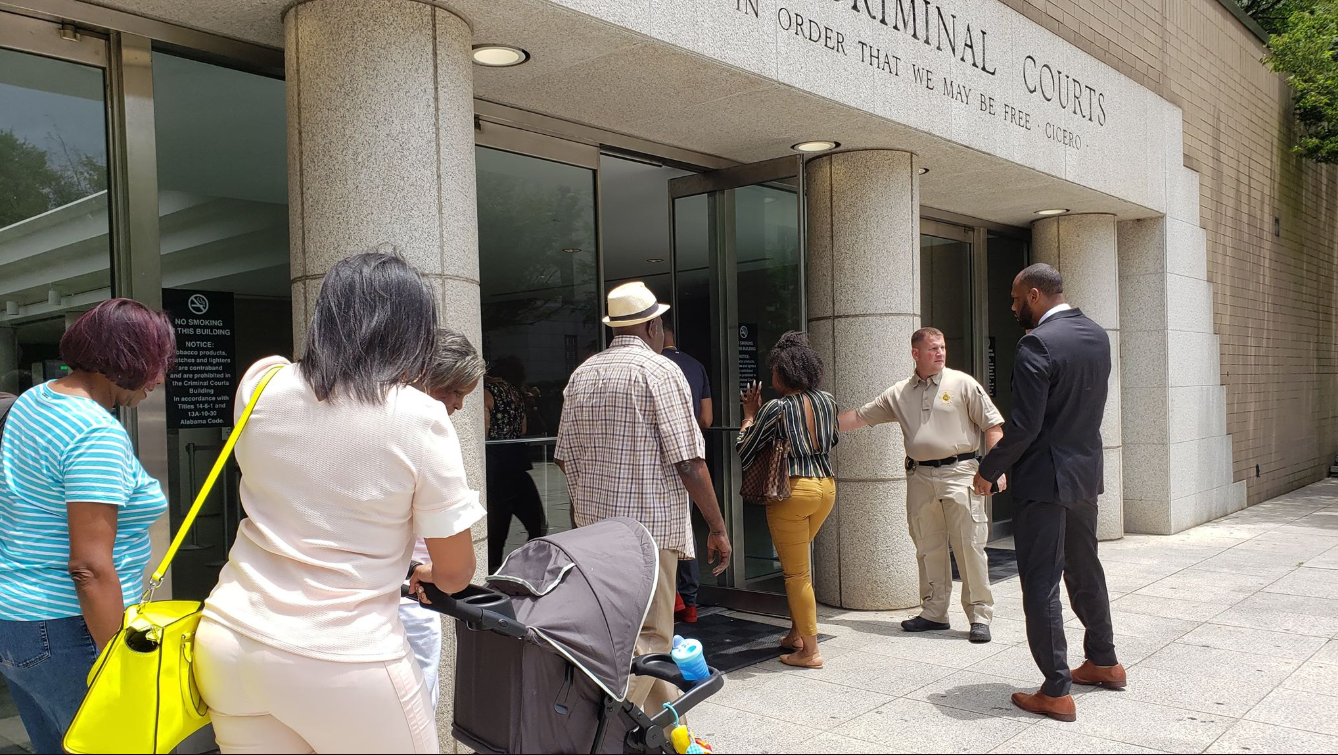 The family of shooting victim, Randy Dewayne Young, enters the courthouse for a preliminary hearing on May 30, 2019.

BIRMINGHAM — Video of a deadly shooting at the Trussville Cracker Barrel on Thursday, March 28, 2019, was played in court during a preliminary hearing. Witnesses also took the stand to tell the court what they saw that night. The presiding judge was the Honorable Clyde E. Jones.

Bryan Hancock, 22, is charged with capital murder in the death of Randy Dewayne Young. Young was shot in the head in the parking lot of the restaurant after a dispute over parking, according to both parties. However, Hancock’s attorneys claim the shooting was in self-defense.

The case was stayed earlier in the week after the defendant filed a petition for a writ of habeas corpus. The stay was lifted on May 29, pending the preliminary hearing.

The first witness called to the stand during the hearing on Thursday, May 30, 2019, was the stepfather of the victim. He has been diagnosed with Stage IV lung cancer and will record a video deposition to be used in the future for trial purposes.

The stepfather testified that he let Young drive his Mitsubishi Galant to the restaurant. They parked directly in front of the restaurant, according to testimony. After they finished eating, they ordered a meal to-go for Young’s mother, who was at home. As they were waiting for the carryout order, the stepfather said he stepped outside to have a cigarette. While he was smoking, Young was inside Cracker Barrel completing payment for the order. The stepfather saw a black truck pull into the spot beside his car. He testified that the truck parked in a way that blocked his car from being able to get out of the parking spot. The stepfather said the driver got out of the vehicle, leaving the driver’s side door open, and started to walk towards him. 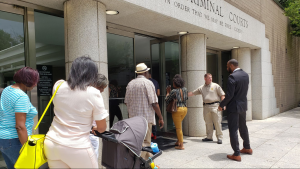 The family of shooting victim, Randy Dewayne Young, enters the courthouse for a preliminary hearing on May 30, 2019.

“First I told him, ‘Man, you are awful close, you almost hit my car!” the stepfather said. “And he said he was having a bad day and he had lost a pack of cigarettes.”

“I left Dewayne out under the gazebo and I went in to get the driver…because the truck was still blocking me in,” the stepfather testified.

“I didn’t hear him call him white because the driver and I were inside the restaurant, but he said he called him white,” the stepfather said.

“Dewayne said, ‘Man, if you say something to me like that again, I’m going to pull your little ass out of that truck and beat the sh** out of you,’” the stepfather said.

“At that time I looked up and I saw an arm come out of the window,” he said. “Dewayne had no chance to react at all. It happened so fast. He was an inch from his head and he pulled the trigger.”

During the stepfather’s testimony, Young’s mother became visibly upset but remained silent during the proceedings. She placed her hand over her face several times. When the stepfather spoke about getting the to-go food for her, she shook her head and covered her face. She also became upset during the testimony that included graphic details about the shooting of her son.

The stepfather testified the gun was very close to his stepson’s head when it was shot. After the shooting, the stepfather said he was worried Hancock was also going to shoot him. He said he went back into the restaurant to ask for help.

Young was originally taken to St. Vincent’s East, but was then transferred to UAB where he died on March 30, 2019.

On cross-examination, the stepfather was asked by the defendant’s attorney if he was aware that Young punched Hancock in the face before the shooting. The stepfather said he never saw any punches thrown. The attorney pointed out that Hancock’s face showed injuries consistent with a punch in the face.

The defense also pointed out what they said were inconsistencies between the stepfather’s original statement to police and his testimony during the preliminary hearing. Hancock’s attorney said the stepfather originally stated there was only one verbal exchange between the victim and the shooter, but in court Thursday, he mentioned three exchanges between the two.

The attorney said Young did not go to the driver’s side of the stepfather’s car until after Hancock had already gotten back into the passenger side of the truck.

The attorney for Hancock said video surveillance from Cracker Barrel would show the shooting was done in self-defense. The video was shown for the court.

Also during cross-examination, the stepfather was asked about the details of the moments leading up to the shooting. He said, after words were exchanged, he thought the issue was over, that the truck would be moved and that they would leave. From his vantage point, he could see Hancock sitting in the passenger’s side of the truck and he said he never saw Young punching Hancock in the face. He testified he was just feet from Young and Hancock in the seconds leading up to the shooting. The stepfather said he and Young were both frustrated about not being able to leave.

The defense claims the driver of the truck was already backing up and trying to leave before the shooting.

The court heard 911 call recordings from the night of the shooting. One of the three callers was Bryan Hancock. He stated to the 911 dispatcher that he shot someone in self-defense at the Cracker Barrel in Trussville. He told the dispatcher Young had punched him in the face “for no reason.” He said he thought his nose was broken.

You can then hear police telling Hancock to get on the ground.

According to responding officers with the Trussville Police Department, the two men in the truck never left the scene after the shooting. When they arrived on the scene, police saw the victim on the ground, suffering from a gunshot wound to the head. The officers said in their reports that there were people trying to stop the bleeding from Young’s wound when they arrived. Police called paramedics, who then transported the victim to the hospital.

Police said the only gun recovered by evidence technicians was a GLOCK pistol, the firearm investigators believe was used to shoot Randy Dewayne Young. The gun was found underneath the passenger’s seat in the truck.

The lead investigator went to the jail to interview Hancock and he testified Hancock was unconscious. According to the investigator, Hancock was given Narcan, an anti-opioid overdose medication, and taken to St. Vincent’s East. Medical staff told the police department that Hancock told them he had taken 10 Lortab and five Xanax pills.

Hancock was treated and released from the hospital, then taken back to jail.

In a written statement, Hancock said he and the driver of the truck were sober at the time of the shooting. He said Young brandished a gun, so he shot him. Again, evidence technicians said no gun was found on Young or in the vehicle he was driving.

In an audio-recording of Hancock’s interrogation at the Trussville Police Department, you can hear the investigator reading Hancock his Miranda rights. The interrogation took place on the morning of Friday, March 29, the day after the shooting.

Hancock stated he shot Young after he saw Young brandishing a gun. He then told police he didn’t want to say anything else until he had an attorney.

Police said the driver of the black truck told investigators he was picking up a friend at Cracker Barrel when he parked in front of the restaurant. He said he asked the stepfather for a cigarette and told him he would move the car. Before going back to the car, the driver said he went inside the restaurant. According to a written statement, the driver said he came back outside and saw Young striking Hancock in the face, then saw Hancock shoot Young. The investigator testified that during questioning, the driver said after the shooting he moved the truck over a couple of parking spots. He then said he got out of the truck and checked for a pulse on the victim. He told investigators he went back to the truck and told Hancock, “You killed that man.” According to police, the driver told them the gun used in the shooting belonged to him.

Both the truck and the car were towed from the scene for further examination.

A server at Cracker Barrel said in a statement that she was inside the restaurant at the time of the shooting. She told police before the shooting the stepfather came in looking for the driver of the truck. She said he seemed angry when he came and asked the driver to move his truck. She said the two left the restaurant and the father came back inside about two minutes later saying his son had been shot.

A man who was leaving the restaurant with his wife told police he saw two men arguing over parking. The statement he provided to police said before the shooting, he saw Young go back to his car and grab something from the back of the car. He said he did not see what Young was grabbing. He also said he never saw a physical altercation but he heard “barking back and forth.” He said he left the area after noticing the situation was escalating and he said he and his wife were fearful that a gun was about to be used.

After Young died, the charge against Bryan Hancock was upgraded to capital murder. He is being held in the Jefferson County Jail on a $250,000 bond after Judge Jones amended his bond on Friday, May 31, 2019.