Trussville: Date for 2nd Annual Smokin’ & Stokin’ has been announced

TRUSSVILLE — The Trussville Rotary Daybreak Club is proud to announce that they will host the Second Annual Smokin’ & Stokin’ BBQ Cook-off on Oct. 12 from 11 a.m. to 4 p.m. This year’s cook-off will be held at the Trussville Civic Center. This event is a Kansas City Barbecue Society and an Alabama Barbecue Association Event. There will be approximately 40 teams competing in a cook-off to see who has the best ribs, pork and chicken.

Festival-goers can expect to find kids’ activities, local entertainment including OutShine (a popular party band), barbecue sampling, a corn hole tournament (additional charge to enter the corn hole tournament), and a big screen TV for watching college football games. Attendees can also vote for their favorite Boston butt.  Boston butts will also be available for purchase, with proceeds going to support the various Rotary projects throughout the year. 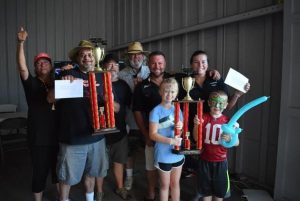 Entry to the Second Annual Smokin’ & Stokin’ Festival is $5 and includes all kids’ activities, barbecue sampling and entertainment. There will be food trucks with a multitude of treats along with beer, wine and soft drinks, which will be available for purchase.

This year, the Smokin’ & Stokin’ BBQ Cook-Off will also feature the Smokin’ and Stokin’ Poker Run, a motorcycle poker run unlike any other to benefit injured Trussville resident and Tarrant Firefighter Lt. Jerry Presley who was injured in the line of duty on Sunday, Jan. 27, 2019.  The cost to enter the Poker Run is $20 per rider and $10 per passenger. Registration will begin at Riders Harley Davidson in Trussville at 8 a.m. and Kick Stands up at 9:30 a.m. After a group ride past the Tarrant Fire Department, stops will include The Trussville Cigar Company, Van’s Bar, Sheepdog Firearms, along with others, and concludes at the BBQ Cook-Off, which is included in the price of the poker run.  More information on the Poker Run Ride may be found on the Trussville Daybreak Rotary website: www.trussvillerotaryevents.com . 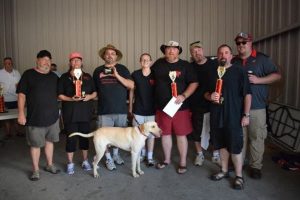 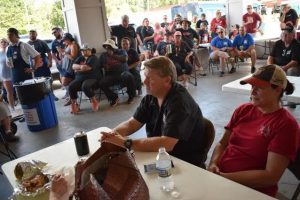