MONTGOMERY, Ala. – Centers for Disease Control and Prevention Director Robert Redfield visited Montgomery on Friday to talk with officials about ways to combat Alabama’s high rate of new HIV infections.

As a part of President Donald Trump’s initiative to reduce new HIV infections by 75% in five years and at least 90% in 10 years, Redfield is traveling to states with the highest rates of infection.

Southern states made up about 52% of the new HIV infections in the country in 2017 and part of the initiative is targeting the seven states, including Alabama, that are showing the highest rates of new infection, mostly in rural areas.

Part of the conversations Friday were about creating unique strategies for particular communities.

“I always say by the community, for the community and in the community,” Redfield said. “We don’t need to develop an initiative that keeps doing what we’re already doing, which hasn’t reached the individuals we haven’t reached.”

Redfield explained that the federal initiative will try and stop infection rates from increasing through several approaches.

One is to increase and improve diagnoses because currently one in six infected people in Alabama don’t know they have the virus that causes AIDS, State Health Officer Scott Harris said.

Other goals include: Getting those infected into treatment as quickly and as effectively as possible; getting people at high risk of infection started on preventative measures like the pre-exposure prophylaxis pill; working with health departments to be able to identify hot spots of infection quickly; and developing community-specific plans to stop infections. 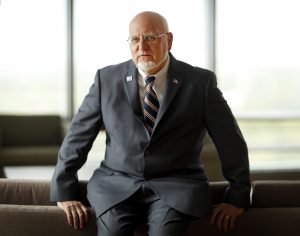 Dr. Robert Redfield Jr., director of the Centers for Disease Control and Prevention, is photographed at the agency’s headquarters in Atlanta, Thursday, June 28, 2018. The head of the nation’s top public health agency once opposed condoms and needle exchange programs as ways to stop the spread of sexually transmitted diseases. But in one of his first media interviews since taking office, Redfield said his views have changed. (AP Photo/David Goldman)

Redfield said that the stigma surrounding HIV and AIDS is often the biggest barrier to offering help in rural areas of the country, including Alabama, and hopes to normalize the topic of HIV so it will de-stigmatize the topic and lead to more people being diagnosed.

“When you’re trying to deal with HIV in rural America, stigma is even a greater issue,” Redfield said. “So we are looking to the state of Alabama to begin working on innovative, effective approaches that can impact HIV and normalize HIV so that this negative contribution to stigma can be negated.”

He agreed that stigma was a large part of the problem with stopping the spread in the state, but also said there are also larger structural problems that are preventing people from getting the care they need.

“There is an issue with access to health care, so it is one thing to tell primary care doctors, ‘Hey the CDC recommends every adult to get tested at least once in their lifetime,’ but it’s a totally different situation when not every adult or Alabamian can get to the doctor,” Rafferty said. “If you address some of the structural issues, you would hope to see better health outcomes.”

“Lots of people that have low socioeconomic status, they may in some cases have low educational attainment and they may have unsafe environments in which they live, and they may not have good access to health care or good access to nutritious foods,” Harris said. “They have a number of reasons that are all predictors for having poor health outcomes.”

When asked about multiple rural hospitals closing in recent years, Harris said that was another hindrance to halting infection rates given that the problem seems to be in rural areas.

“Alabama has particular challenges because we are not a Medicaid expansion state,” Harris said. “That has clearly played one of the most significant roles in whether hospitals are able to stay open or not, but anytime you lose a rural hospital you lose access to care for people in that community.

“Many times, you certainly lose the biggest employer in many of these rural counties that we have and that is the sort of ripple effects that are negative and can go on for years.”

Redfield also toured the Medical Advocacy & Outreach Clinic in Montgomery. It offers HIV testing, education and treatment. It has a telemedicine program that allows rural communities that don’t have many doctors the ability to communicate with physicians over a video chat set up to diagnose patients in rural areas.

After the tour, Redfield said he could just feel the amount of energy and love clinic staff put into their work. He said it is a great example in how to stop infection rates from rising.

“I am really impressed with the enormous amount of enthusiasm that the advocacy and outreach workers have,” Redfield said. “You can just feel it in the air, it just palpates in the air.”