OMAHA, Neb. — After a stellar season, a 5-3 loss to Louisville has ended Auburn’s dreams of a College World Series win on Wednesday, June 19.

Conor Davis had an epic performance in the game, putting up a homer and doubling twice. The homer came in the ninth inning and brought Auburn within two. Steven Williams came up with a two-out double to bring the possible tie run to the place. It was not enough, however, as Louisville put up a strikeout to end the game.

“That’s been the story of us all year,” said Davis. “People have counted us out, we’ve been behind, we’ve battled back. This is what we’ve been doing all year.

“It’s a tough pill to swallow that we didn’t get where we wanted to go here, but at the same time we made history by being the first team in 22 years to get here, so it’s very exciting for our team and where it’s going with Coach Thompson.” 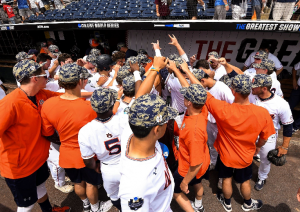 The game ended 24 hours after it started due to weather delays.

Once the game resumed, Richard Fitts struck out two in 3.0 scoreless innings before allowing a run in the eighth.

“My slider was working well,” said Fitts, a freshman who pitched a combined 5.1 innings in both Auburn College World Series games. “I tried to give my hitters the best chance to win, and they battled it out all game.”

Auburn (38-28) reached the College World Series for the first time since 1997, winning the Georgia Tech Regional and Chapel Hill Super Regional to advance to Omaha.

“I came away thinking that Auburn baseball can play in this deal without having to do anything magical,” Auburn coach Butch Thompson said. “As time goes by, I’ll see that we had the ingredients.