Birmingham PD investigating robbery at a Chevron on Lakeshore Parkway

From The Trussville Tribunes staff reports

TRUSSVILLE — Detectives with the Birmingham Police Department are conducting a robbery investigation into an event that happened at a Chevron in Birmingham Thursday, May 30.

Investigators are requesting assistance from the public in identifying the man believed to be involved in the incident. 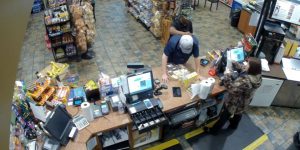 Police said the robbery occurred on Thursday, May 30, at approximately 9:40 p.m., at the Chevron gas station located at 1500 Lakeshore Parkway. The man approached one of the store clerks and held him at gunpoint as he demanded the other clerk give him money. The man managed to leave the immediate area on foot. He wore blue pants, a black shirt and green camouflage hat.