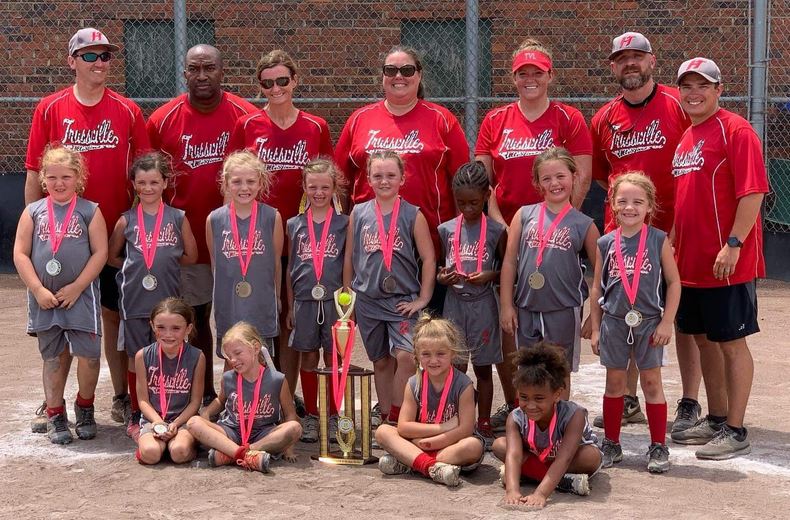 FOLEY – The USSSA Rec/All-Star World Series is a five-day double-elimination tournament that will be taking place in Foley starting July 9.

One of the participants this year will be Trussville’s own Girls’ 6U Softball team.

“We will play teams from all over the southeast,” said Mallory Halpin of Trussville Girls’ Softball. “The girls have the opportunity to participate in other activities as well, including gift exchange, team pin trading, skills class, and even an opening ceremony with a parade.”

Being able to participate in an event like this is an honor, but it takes a lot of hard work, dedication and commitment to get there.

“Our girls have been extremely committed this season,” said Halpin. “We started playing rec ball in March of this year, and we’ve not stopped since. Once the regular season was over, this All-Star (team) was picked and immediately started practicing for our Pre-Area Tournaments. This team only practiced together for approximately two weeks before winning second place in the first Pre-Area USSSA championship. Since that time, we have dedicated ourselves to practice four days per week, sometimes practicing for three hours at a time.”

In addition to practice, teams must find the money it takes to be able to participate.

“Not only do we practice, but our girls and parents have dedicated many hours to fundraising,” said Halpin. “We have sold T-shirts and hoodies, donuts, raffle tickets and even got to hang out with awesome employees at Marcos Pizza, Fresh Value grocery and most recently, Metro Diner.”

This team consists of girls from Trussville and the surrounding areas from ages five to seven. The majority of these athletes have played softball for a couple of seasons and now have made the commitment to play at a higher level.

“Each girl has something great to bring to the team, whether it’s a great ability to catch, throw, hit, run bases and most importantly, encourage her teammates,” said Halpin. “Not only are they great at softball, but our girls also enjoy other activities such as dance, gymnastics, swimming, art and piano. These girls and their parents have put in many hours of practice and lots of sweat to get to the World Series. They have practiced hard, played hard and fundraised on many ‘free weekends,’ but most importantly, they have put their best efforts into it all. Of course, they get tired, but they have the drive to do their best and have fun!”

While it is exciting to perform at such a high level, the girls have not lost sight of the fact that playing a team sport is about so much more than wins and losses.

“There’s no way to express the excitement these girls have when they get together,” said Halpin. “Softball is an important part of what we are doing this summer, however, more importantly, these girls have developed relationships that will hopefully last a very long time. They love each other like sisters.”