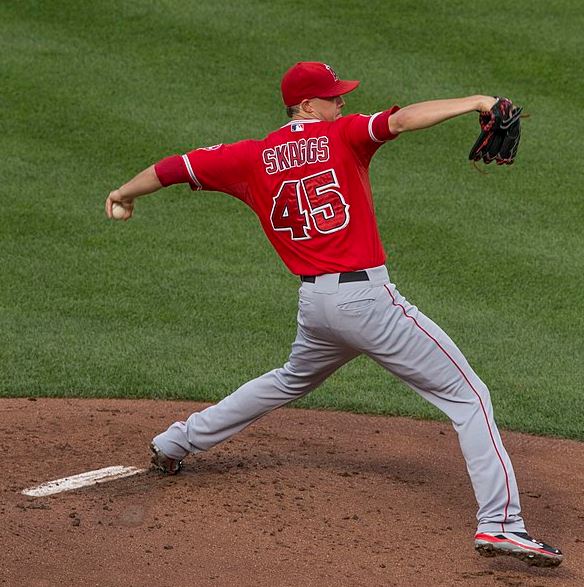 Angels try to get handle on raw emotion after Skaggs death

ARLINGTON, Texas (AP) — Mike Trout led a parade of Los Angeles Angels into the interview room of the Texas Rangers for the first interaction with reporters since teammate Tyler Skaggs died.

The two-time AL MVP tried to smile when it was his turn to talk, only to find himself fighting back tears almost immediately. Trout wasn’t alone following a 9-4 win over the Texas Rangers on Tuesday night, a day after the 27-year-old Skaggs was found unresponsive in his room at the team hotel.

Andrew Heaney, a starter alongside Skaggs who said the fellow left-hander was his best friend, choked back sobs before finding his composure.

It was the opposite for Justin Upton, who started with a smile talking about how Skaggs’ reaction to the victory would be to say, “We’re nasty!” Soon, though, the outfielder dropped his head and stopped in the middle of a sentence, getting a squeeze on the shoulder from Trout.

The emotion was just as raw in that same room a few hours earlier with manager Brad Ausmus and general manager Billy Eppler.

“It’s just a tough 24 hours,” Trout said as he sniffed and gained a handle on his emotions. “Like Brad said earlier, Skaggsy wouldn’t want us to take another day off. The energy he brought to the clubhouse, every time you saw him, just pick me up.”

Before Wednesday’s game, the Angels clubhouse was open to reporters for the first time since Skaggs’ death. His No. 45 jersey was hanging in his locker along with the equipment that had come with him for the road trip, including his glove.

Trout and three-time NL MVP Albert Pujols didn’t appear while reporters were allowed in, and others milled about as the baseball routine began to kick in again.

“The guys all believe that we’ll get through it,” Ausmus said in the LA dugout before Wednesday’s game. “It’ll help being together getting through it. Today is probably the very first small step in that direction, but it’s going to take time.”

Tommy La Stella was on crutches the day after fouling a 97 mph fastball off his lower right leg and fracturing a tibia. The AL All-Star had to be replaced and is likely to miss at least two months. But losing out on his first All-Star chance two days after being selected as a reserve didn’t matter much to La Stella with Skaggs on his mind.

“With what we’re all dealing with right now, this is pretty meaningless,” he said.

There was some question whether Trout and his teammates would talk to reporters after Tuesday’s game — until just about every one of them showed up in a room normally occupied only by the home team’s manager after each game.

Ausmus, much more composed than he was in a pregame meeting with reporters that included Eppler, owner Arte Moreno and team president John Carpino, said he would take questions about the game before turning it over to the players.

There was one question each for five players, including Kole Calhoun after his two-run homer that included a heartfelt celebration at home plate when he pointed skyward and had a message for his fallen teammate.

Justin Bour, who had a two-run single on the only pitch he saw as a pinch-hitter after La Stella was injured and had to leave the game on a 3-2 count, finished off the interview session.

Bour went through the same thing three years ago with the Miami Marlins, when pitcher José Fernández was killed in a boating accident late in the season.

“Like the guys say, reserve your sorrow for Skaggs’ family, his wife,” Bour said. “We’re going to keep grinding every day and playing hard and playing with a spirit.”

Heaney was singled out for a question among the couple of dozen players because of his close relationship with Skaggs, a Southern California native remembered as a fun-loving teammate.

The day before he died, Skaggs posted a picture on Instagram of him and the Angels in cowboy hats and other western clothing outside their plane. Skaggs organized the effort because the club was stopping in both major league cities in Texas. LA goes to Houston next.

“There’s probably about 100 other people out there that would say he was their best friend too,” Heaney said as he tried to control his sobs. “Because he treated everybody like that. He just had such an infectious personality.”

The team will remember the energy he brought to the clubhouse.

“He was magnetic,” Eppler said. “He was generous and kind, and our team will never be the same without him. But forever we’ve been made better by him.”

And the Angels will be playing for him, probably for the rest of the season.