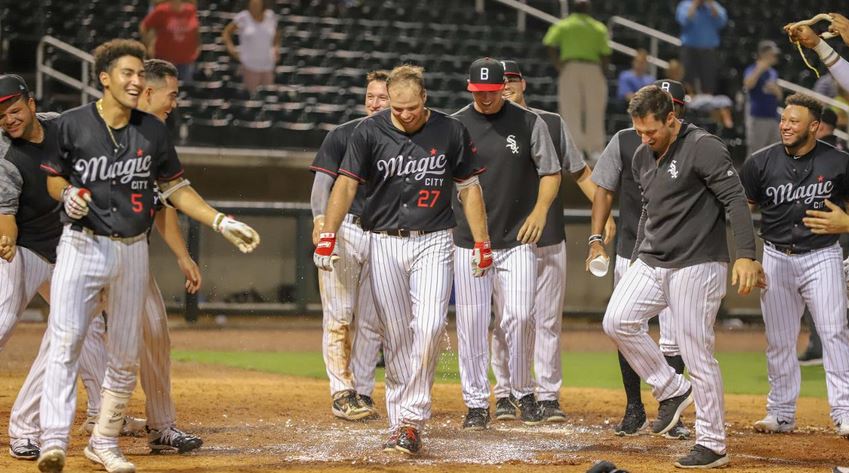 Photo by Hannah Stone, courtesy of the Birmingham Barons

BIRMINGHAM, Ala. — The Birmingham Barons (14-5, 41-47) walked off against the Pensacola Blue Wahoos (9-10, 47-42) for the fourth time in five games behind a solo shot off the bat of newcomer Damek Tomscha on Monday night at Regions Field.

Tomscha, whom the White Sox organization signed to a minor-league contract June 28, sent the first pitch he saw to lead off the bottom of the ninth over the left-field fence.

It marked Tomscha’s first home run since he joined the Barons and marked a momentous return to the state of Alabama for Auburn University graduate.

Tomscha’s walk-off home run allowed Barons left-hander Kodi Medeiros (W, 3-8) to pick up the win in relief. Medeiros struck out a pair and allowed one run one one hit across two innings of work.

Medeiros’ strong performance out of the bullpen backed up a strong start from Matt Tomshaw, who struck out eight through seven scoreless frames. The veteran left-hander, who made his 11th career start against Pensacola, scattered six hits but settled for a no-decision.

Blue Wahoos right-hander Jorge Alcala matched Tomshaw’s effort with six scoreless innings of his own. The right-hander, whom MLB Pipeline ranks as the No. 19 prospect in the Twins organization, struck out seven and allowed just four hits.

Pensacola grabbed the lead via a sacrifice fly in the eighth inning before the Barons tied it in the bottom half of the frame when Joel Booker, who led off with a single and stole second, came across to score on an RBI-groundout from Luis Gonzalez.

The Barons and Blue Wahoos will conclude their six-game set Tuesday night as Birmingham sends left-hander John Parke (1-0, 4.00) to the mound against Pensacola right-hander Griffin Jax (3-2, 2.04).