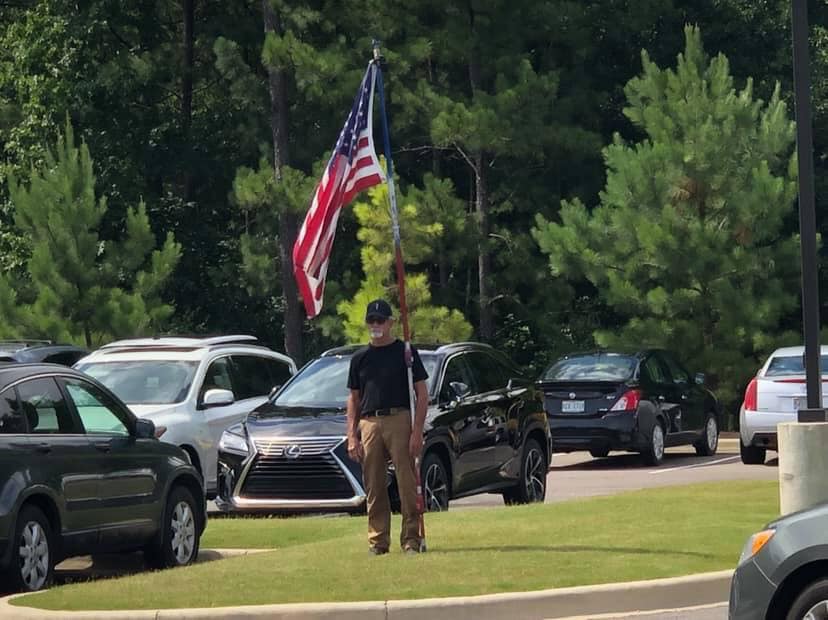 GRAYSON VALLEY — Since Memorial Day 2016, the so-called “flag man” has been answering a calling in the Birmingham-metro area. Roy Brook not only expresses his patriotism along roadways by standing with a United States flag, but he also pays respects to people he doesn’t know, outside funerals and memorial services.

“It’s just the way that I show that I care,” Brook said. “I’m more concerned about the people that I’m there for than I am for myself.” 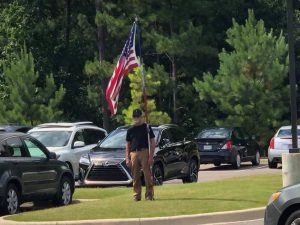 One of the families Brook recently showed concern about was the Frew family, from Grayson Valley. The Frews lost their son, Zachariah Taylor Music, to a shooting at the Riverchase Galleria. Jill Frew said Brook gave her joy during the most difficult time in her life when he stood outside the funeral home the day her son was laid to rest.

Brook confirmed, what he is doing is a “God thing.”

“My decisions are based on something bigger than me,” Brook explained. “I base my decisions on the Bible.” 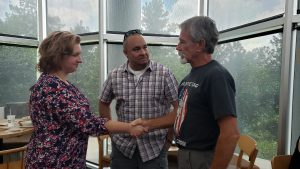 The Frews took to social media to find the man seen standing tall during their son’s funeral. It didn’t take long before they made contact with Brook. On July 10, 2019, just 11 days after the funeral, they met face-to-face with the stranger who showed love and support on that day. 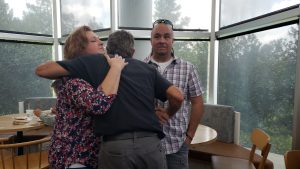 Jill Frew embraced Roy Brook after meeting him for the first time since her son’s funeral.

“I want you to always know that when you see me or anything about me, I haven’t forgotten about you and your son,” Brook told the Frews. “I’ll always be thinking about him no matter where I am or who I’m standing for.”

Scott Frew, a Marine and Birmingham Fire & Rescue Lieutenant, expressed his appreciation for the man he called a real hero.

“I thought it was awesome,” Scott Frew said. “It’s good to know that people out there still care. In my line of work you see a lot of bad things, so it recharges my batteries to keep me going.”

Brook doesn’t always have the privilege of meeting the people he supports, but he often gets messages of thanks.

“I just had to shake his hand and say hello to someone who did this for someone he didn’t even know,” said Jill Frew. “It says a lot about his character.” 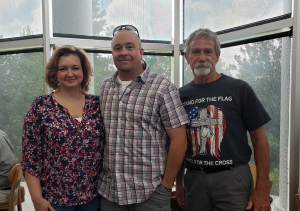 Brook said his selfless acts of kindness all started on Memorial Day in 2016. He was at home watching television when he saw something that made him think it was time to take action.

“I told my wife, ‘I feel like I need to do something.’ The more I see things that are less than patriotic, the more I want to do it,” Brook said.

That’s when he decided to stand strong, flag-in-hand, in hopes of renewing American pride.

When it comes to funerals and memorial services, Brook knows all too well about the pain of losing a loved one.

“I know about tragedy, I grew up in it, so I really care when I see other people dealing with it,” Brook said. “If they’re hurting, I hurt too, especially when it’s a child, I hurt, too.”

“There have been a lot of God things that have happened over the last couple of weeks,” Jill Frew said after meeting with Brook. “It’s been quite overwhelming, all the love and support. I just hold onto that and my faith.”

A GoFundMe account has been set up for the family of Zachariah Music.