TRUSSVILLE — When you hear the sirens, you know there is an emergency. But not everyone knows what to do when they see the lights behind them. That’s why local firefighters let The Trussville Tribune ride-along with them on emergency calls.

Batallion Chief Al Tinney with the Trussville Fire Department said pulling over for emergency vehicles is of utmost importance. Every second counts and lives depend on fire trucks and ambulances racing to the scene of an injury or illness.

“Time may be of the essence, due to the emergency that they called about,” Tinney said. “It could be somebody that’s having difficulty breathing. Or, with a fire call, the more time that goes by, the more dangerous it is for firefighters because the structure will become less stable.” 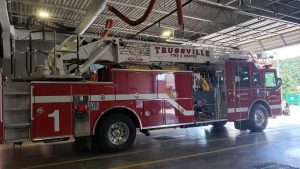 It can be frustrating to the apparatus operator, or the driver of the fire engine, when cars don’t let them through traffic.

“You have to stay off your phones when driving, don’t be driving and taking pictures of a wreck scene going down the road, slow down, and move over a lane if that’s available,” said Tinney.

Tinney also said not everyone that doesn’t pull over is at fault. There are several reasons drivers may not hear the sirens or know how to react. The loud sirens can be jolting and can cause confusion for drivers, especially the elderly. If you see lights behind you, simply pull over to the right shoulder or right lane to allow the emergency vehicles to pass through. Be sure to check around you to avoid hitting another vehicle.

“When the lights are coming towards you, pull over to the right shoulder because sometimes emergency vehicles need to drive on the wrong side of the road to get around traffic,” said Tinney.

If you are in a traffic jam and are unable to move, stay put until the truck can find a way around the traffic.

Firefighters, ambulance drivers and police are in danger when working on a scene on the side of a road. Tinney said onlooker traffic can cause serious accidents involving cars on the road and first responders on the shoulder.

“In my role, my job is to stand back and watch the entire scene, one of the parts being watching for traffic,” he said. “If it looks like somebody’s going to veer out of their path I want to be able to alert my fellow firefighters, which are my family.”

Tinney said moving over is also important when drivers see disabled vehicles on the side of the road. Even when there are no flashing lights, it is important to slow down and move over. 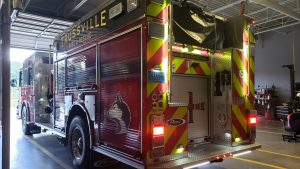 Violating the state’s “Move Over Law” can result in a misdemeanor charge punishable with a $25 fine. A second violation comes with a $50 fine and a third violation costs $100.