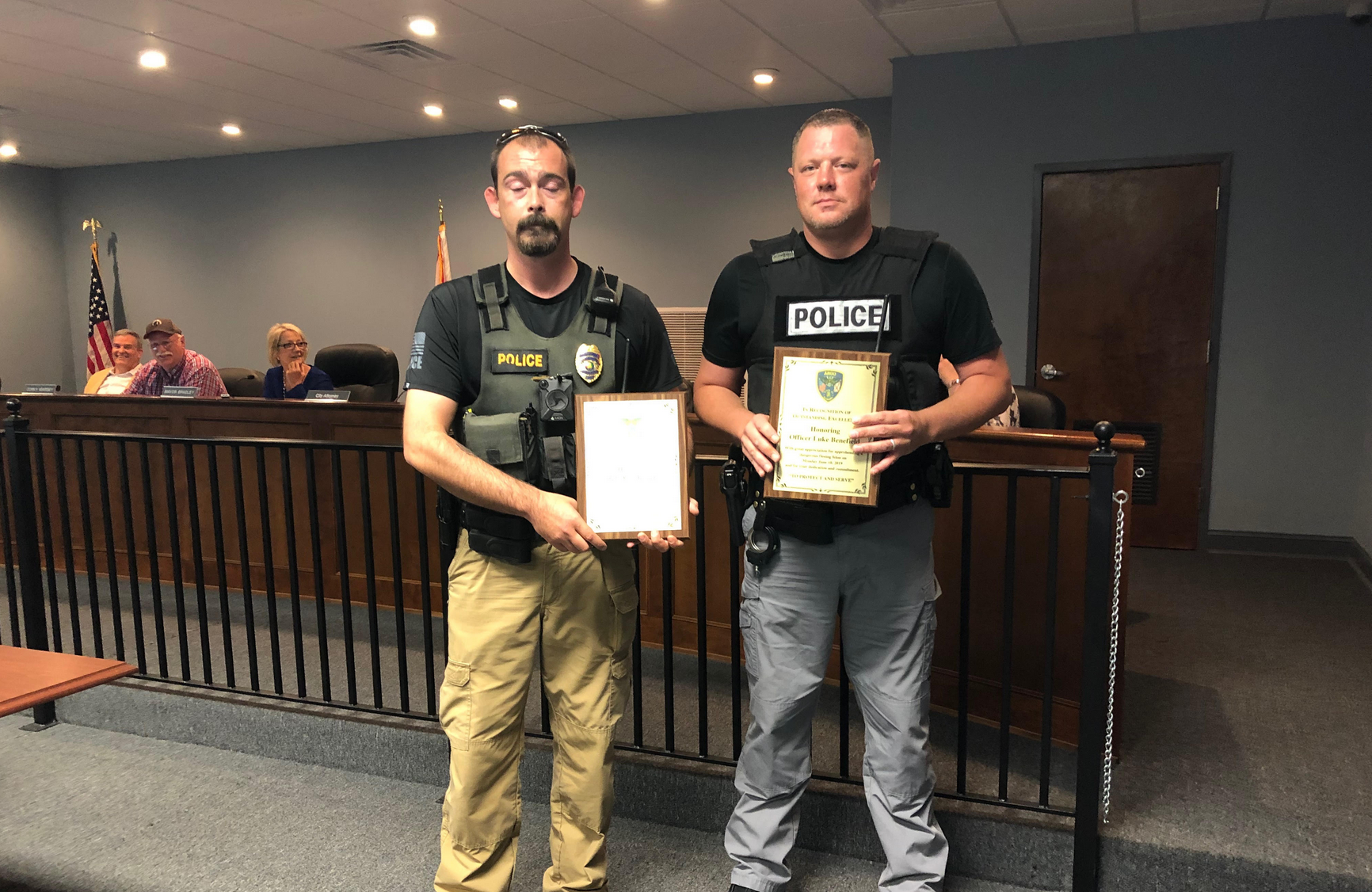 ARGO – The Argo City Council recognized two Argo police officers that apprehended a suspect that had, earlier, shot at Birmingham police. The first to be honored was Officer Luke Benefield. He was presented with a plaque by Captain Glenn Wells of the Argo Police Department. Wells read the inscription on the plaque to Benefield and the council.

“In recognition of outstanding excellence honoring Officer Luke Benefield with great appreciation for apprehending a dangerous fleeing felon on Monday, June 10, 2019,” said Wells. “And for your dedication and commitment to protect and serve.”

Wells read a letter of commendation prepared by Downey and presented to the council. 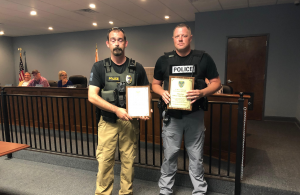 “On June 10, 2019, at approximately 10 p.m., Birmingham police officer attempted to perform a traffic stop for speeding,” Wells said. “The suspect driving the vehicle refused to pull over and a pursuit ensued.

“Birmingham Officer Rodarius Mulden stated, ‘During the pursuit, the suspect fired multiple rounds at the officer in the patrol unit, which resulted in an exchange of gunfire.’ The pursuit ended at the intersection of McIntyre Road and Old Springville Road as the suspect lost control of the vehicle resulting in a one-car accident.

“The suspect abandoned the vehicle and ran into the woods. Multiple law enforcement agencies, including Argo Officer Luke Benefield, searched for the suspect during the night. The next morning at approximately 8:30 a.m., Sgt. (Alan) Busler received a phone call from central dispatch stating that a person fitting the description of the suspect was seen … Sgt. Busler and Officer Benefield arrived … locating the suspect. The suspect had a stick in one hand and antlers in the other. The suspect was ordered to drop the items in his hands and a classic felony takedown arrest was made. The suspect offered little resistance.

“The suspect was positively identified through NCIC and turned over to the Birmingham Police Department. The arrest was handled in a skillful and professional manner by Sgt. Busler and Officer Benefield. Their teamwork led to a successful conclusion without harm to the suspect or the officers. I commend and sincerely thank Sgt. Busler and Officer Benefield for doing an outstanding job while remaining focused during the apprehension of a wanted felon who shot at police.”

In other news, the council received an update on the proposed storm shelter by Council President Anthony Alldredge. The electrical engineer that has been working on the project suggested a small storm shelter be built specifically to protect the generator that will be used to provide power to the storm shelter and the Argo municipal building in the event of severe weather.

Councilmember Gordon Massey suggested it could be possible to equip the generator with a transfer switch that would allow it to directly power the storm shelter in the event that the municipal building was destroyed. Councilperson Ann Cowan asked the question if two generators could be used to solve the issue. Alldredge said he would coordinate with the electrical engineer and propose Massey and Cowan’s solutions. The matter was tabled until the next meeting.