When Dr. Charles Hart began his practice, his focus was on large animals like horses and cows. As the community has evolved, so has his business. Now, Clay Chalkville Animal Clinic treats dogs and cats of all sizes and shapes and has grown from a home-based business to one of the most trusted veterinarian clinics in the area.

“My practice has changed to less than 5% large animals now,” said Dr. Hart. “A lot of the pastures where I used to go are now subdivisions.” Dr. Hart began in a loft in the barn on his family property but built his current practice in the instantly recognizable log cabin style building in 1991 as he began to work with more family pets.

Community involvement is important to Dr. Hart. He is active in his church, serves on the alumni board at Auburn University, and volunteers for local charities when he can. When the city of Clay was created, he was elected as the first mayor and served the community for eight years. That desire to serve others works well with his advocacy for animal wellness. 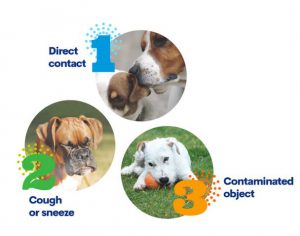 One of the concerns Dr. Hart wants to raise awareness about is the dog flu. Like the human version of the virus, the dog flu can be life threatening. However, the dog flu is different than the human virus in that it does not have a season.

“The dog flu is year-round,” said Dr. Hart. “It’s important to get your pet vaccinated for it.” Hart explained that two strains of the virus exist. One, H3N8 originated in horses and moved into the dog population. “Some people say that strain may have originated right here in Birmingham when dogs and horses were racing at the same facility.” Although no one knows for sure if the virus began locally, Hart warns of another strain, H3N2 which began in birds in Asia. It is possible it came to America as the result of a humanitarian gesture when someone rescued dogs in China—where they are raised for food—and brought them to the United States.

The symptoms of the dog flu are similar to the human variety: coughing, fever, and lack of energy. More advanced cases can progress into pneumonia. Like the human variety, the flu can be deadly to younger and older patients.

“One thing to be aware of,” warns Dr. Hart, “is the transmission period of the flu.” When humans shed the virus, they are no longer contagious after 24 hours. For dogs, the contagious period lasts around 26 days making it much more difficult to contain when it enters an animal population. Last year, the human flu virus was also the H3N2 version.

“We’re trying to vaccinate more dogs, but it is a conversation we have to have with pet owners,” Hart said. “People know about rabies and we have known about Parvo since the 70s, but this is something new.” The vaccination is a series of two shots followed by annual booster shots.

Dr. Hart cautions pet owners not to be complacent in guarding against inoculation against the flu for dogs that stay indoors. The problem, he says is fomites—inanimate objects or materials which can carry infection. The danger is, again, in the contagious period. If a dog has been sick but appears well, it is still contagious. An owner who plays with his dog and then goes out in public carries, hair, germs, and infectious material around without knowing. Something as simple as touching an infected doorknob can potentially aid in spreading the virus.

“That’s how human flu is transmitted,” he said. “That’s why they tell you to wash your hands all the time and people wipe down doorknobs and phones. This is year-round, not like our flu season.”

Dr. Hart understands the family pet is often treated like a full family member and he wants to educate pet owners to approach pet health care in a proactive manner. He says he wants to be known for his attention to detail and for providing the best possible care for animals in the community.