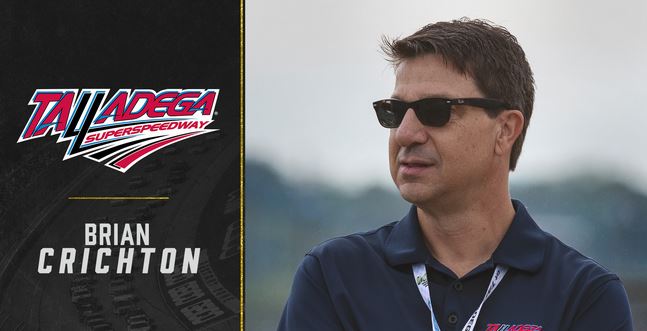 As VP of Marketing and Sales at Talladega, Crichton oversees consumer marketing, public relations, ticketing, partnership marketing and sales. Crichton and his Talladega staff created the popular Friday Night “Big One on the Blvd.” fan event, and elevated the track’s traditional Saturday Night Infield Concert. He has overseen the development of successful programs for military, first responders, teachers and educators, kids, scouts and college students. He has also been a major contributor in the planning efforts of Transformation. In his new role, Crichton will report to Joie Chitwood, COO, ISC, and oversee promotion and operation of the 2.66-mile Talladega Superspeedway, which is celebrating its 50th anniversary this year.

“Brian is a strong promoter and Talladega’s future is very bright with him at the wheel,” said Lynch, who has been a staple at the track since 1993. “He has earned the trust and commitment of this team as they take ’Dega’s storied legacy to new heights driving increased economic impact for the local community and the great state of Alabama.”

Crichton and his wife Karen have two sons – Jackson and Cooper.