Third person charged in death of woman found in well

TUSCALOOSA, Ala. (AP) — A third person is charged in the death of a woman whose body was found at the bottom of a well in Alabama.

Hall was being held on drug charges in Birmingham when authorities linked him to the slaying. Court records aren’t available to show whether he has an attorney who could speak on his behalf. 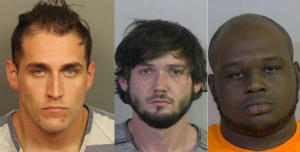 Court records indicate Watkins was killed in a dispute over a cellphone. Her remains were found Monday in Tuscaloosa County in a well, where they’d been covered with cement.

Two more people are being held in the killing. Kendal Tyler Battles, 29, and Joseph Brandon Nevels, 20, are charged with murder and abuse of a corpse.