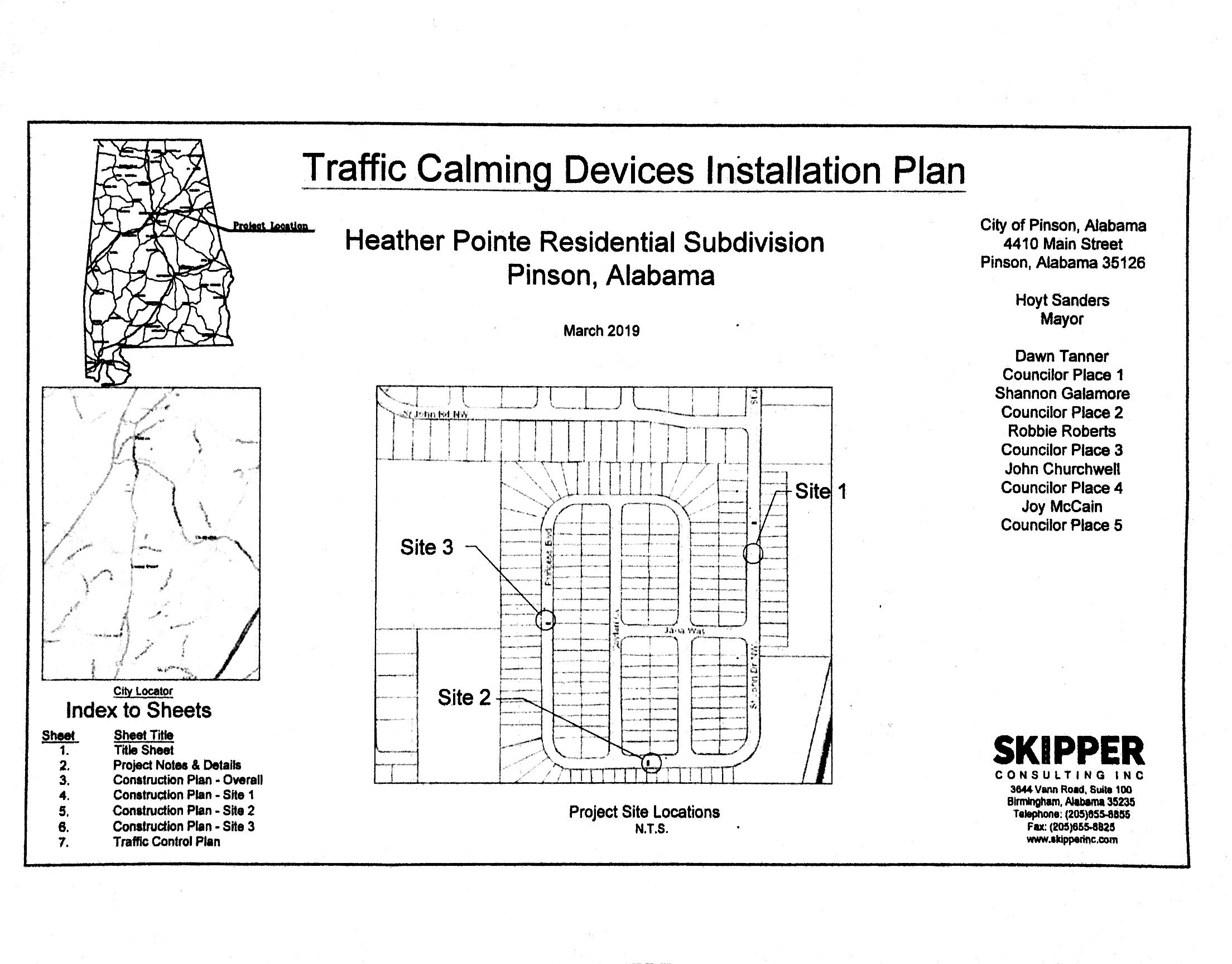 The Pinson City Council passed a motion on Thursday, Aug. 1, 2019, to fund the installation of speed humps, also known as traffic calming devices, at three sites within the Heather Pointe Residential Subdivision.

Each site will have three traffic calming devises, as well as “speed hump” signs, installed. The total cost of the project is $20,909. 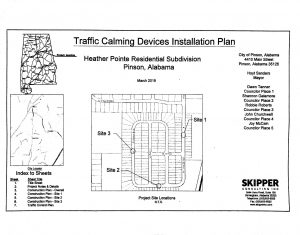 “We started a year or so ago after the success at Innsbrooke with those speed calming devices using Skipper (Consulting Inc.),” Mayor Hoyt Sanders said. “They have provided their final drawing, as well as a quote for the supply and the installer. … This will handle our second largest subdivision there and hopefully improve the safety there.”

Sanders said that the city is also looking into installing speed calming devices in other neighborhoods in the city.

The council also moved to proceed with the purchase and installation of sound equipment, stairs, and vinyl siding for the main baseball press box at the Pinson Youth Sports Complex, totaling $36,193.

“For a few months, we’ve been discussing sound upgrade, siding replacement, stair replacement, as well as some doors for the press box and some power out to our pavilion,” Sanders said.

The siding, however, is a perception issue, Nixon said.

“When people pull into our park and they see old siding, older buildings, they think old, rundown,” he said. “Then they go to Trussville, Clay and Gardendale and see wonderful facilities that are newer than that. This will improve our appearance 100%.

“I’d like to speak to the sound system. The sound system, I understand, on the quote seems high, but the need for it is really important. First off, the sound system will address both up top at baseball/softball and down low at football. It will cover each field at baseball; we’ll have speakers at each field where I can independently control individual fields, or I can all-call. The next great thing is I can all-call at the same time down at football; the systems will be linked. So I can go all-call if we’re looking for a child or if I need a car moved …”

Additionally, the council passed a motion to approve Public Works Director Eric Winfrey to purchase a Turfco Mete-T-Matic IV Top Dresser in the amount of $10,573.

“The Top Dresser applies sand or field dressing,” Winfrey said. “… We needed it specifically to start with at Bradford, but we also need it to help Park & Rec with the infield maintenance, to build up our infields; the baseball fields are way behind. … We need it for all our fields, though. We need all our fields top dressed.”

Councilor Dawn Tanner made a motion to spend $11,463.95 for new athletic helmets for PVHS and Rudd Middle School.

“Just to remind everybody how, in the past, we’ve been trying to help the high school with their helmets with reconditioning – those that can be reconditioned – and trying to add a few every year to the stock for Rudd Middle School and to the high school,” Tanner said. “They’ve come to us again this year requesting it … This is something that when the new coaches got there, they started really looking at the helmets; it’s something that had not been kept up with, so instead of doing it all at one time with a big hit, they’ve been trying to do a little bit at a time.”

The motion to purchase the helmets passed unanimously.

In other city news, the council unanimously approved Resolution 19-28, accepting bids for debris removal services and authorizing the mayor to move into a contract with the lowest responsible bidder, which was Eastern Tree Service with a bid of $12.86 per cubic yard. The other bidder was Call-A-Haul, which bid $17.90 per cubic yard.

The council also approved a motion to pay $900 for a Lego replica of a house on 4094 Spring Street, which the council approved for demolition at its June 20, 2019, meeting.

“We call it the old hotel house, down on Spring Street, which we’ve already voted to have torn down,” Councilor John Churchwell said.

The Lego model will be done by the same artist who made the replicas of Pinson City Hall and the Rock School/Pinson Public Library.

Mayor Hoyt Sanders announced that David Sparkman had stepped down from the Planning Commission, and he appointed Glenda Kirkland to fill the seat for the remainder of the term.

Aug. 15 – City Hall Selfie Day (residents can take a selfie in front of Pinson City Hall and post to social media with the hashtag #cityhallselfie)