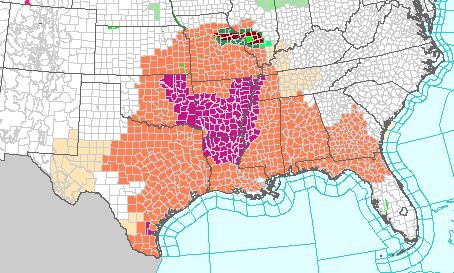 Southern heat wave eases, but not much

BIRMINGHAM, Ala. (AP) — A dangerous heat wave eased a little across the Southeast on Wednesday after a cold front pushing through the region caused damaging storms.

Stifling heat and humidity that made it feel like it was 120 degrees (49 Celsius) in places was being replaced by slightly cooler, forecasters said.

The heat subsided because of a front that caused overnight storms, which left shattered roofs, downed power lines and toppled trees in northwest Alabama. No injuries were reported.

Heat alerts that extended northward into the Midwest earlier this week were limited to Gulf Coast states plus Georgia and South Carolina. The heat index should reach around 110 degrees (43 Celsius), forecasters said.

Higher temperatures were expected in central California and the southwest, where forecasters predicted afternoon highs could hit 115 degrees.

Even Alaska was hot. The National Weather Service office in Anchorage tweeted that the overnight low of 63 degrees (17 Celsius) tied the all-time high for a daily low temperature. The normal low is 51 degrees (10.5 Celsius), it said.

To help cope with the heat, Baltimore’s teacher union requested fan donations for sweltering schools. According to media reports, the district said electrical systems may not be equipped to handle it.