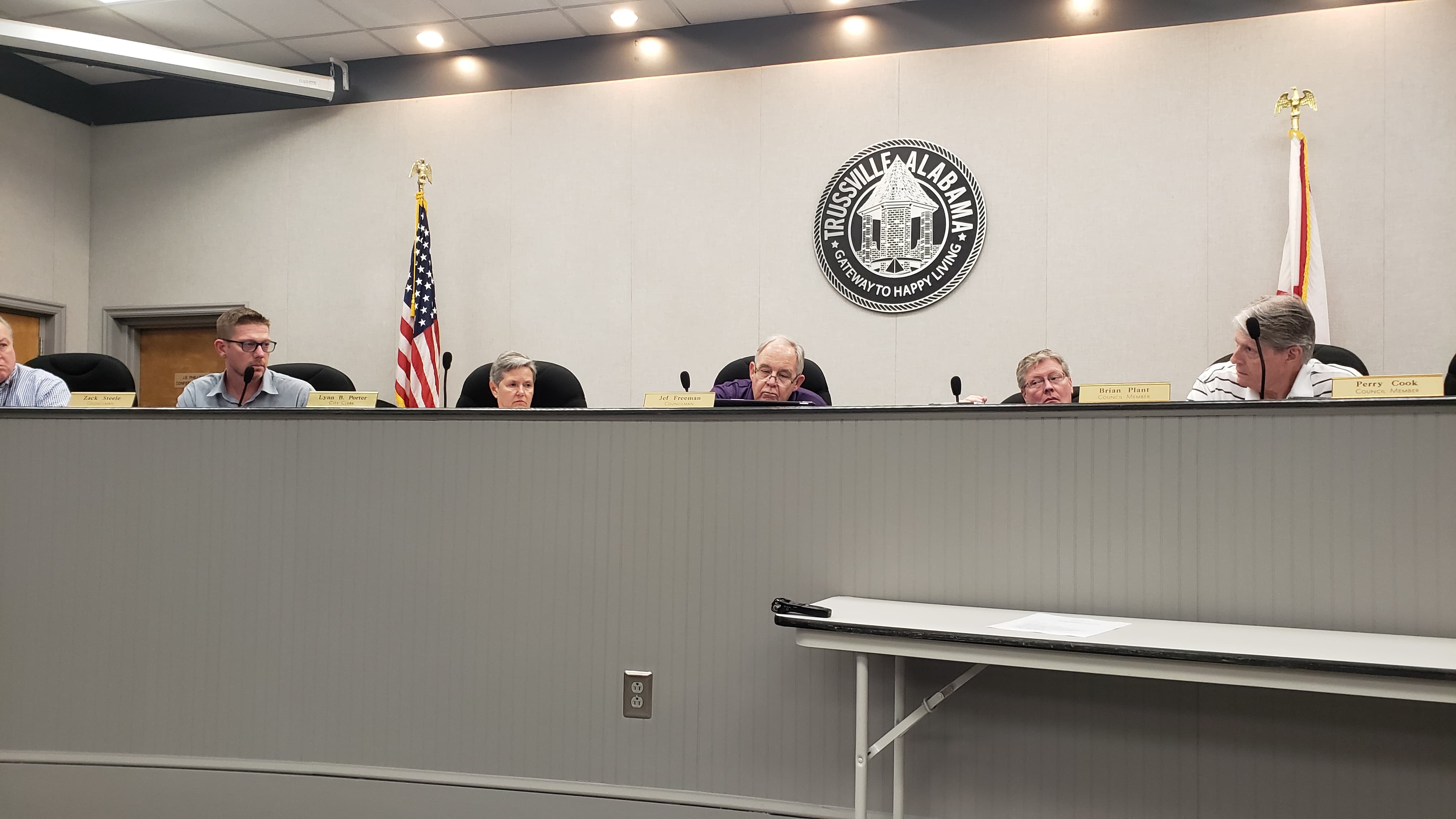 Trussville councilman apologizes for ‘insulting or insinuating’ during rezoning discussion

A question asked during the July 9, 2019, Trussville City Council meeting was addressed at the beginning of the council meeting on Tuesday, Aug. 13.

In the July meeting, council members discussed the rezoning request for what’s called the Hamilton property, off Highway 11. The property is being developed by Highpointe Properties, LLC.

The council voted to approve rezoning during its July 23 meeting but before then, there were weeks of discussions and concerns raised during meetings.

On July 9, developers from Highpointe Properties were on-hand to answer questions about a new plan they thought would provide a compromise for the property owner and surrounding property owners.

During the public hearing section of the presentation, Councilman Perry Cook was the first to speak up. He asked Connor Farmer, the owner of Highpointe Properties, LLC., if anyone on the council helped him on the development plan. That question and Cook’s reaction to the answer was a focus of discussion in the first council meeting in August.

Farmer replied, “Absolutely not,” when Perry asked him if he had help.

“Help me with my development?” asked Farmer. “Haha, no! I sat at my desk and I drew this plan with a pencil and a ruler.”

After more discussion on the plan for the property, concerned resident Jean Cox asked the developers if anyone from the council or from the Trussville City School system spoke with them about the land on the property that is slated for the new Board of Education building. The particular piece of property was originally a part of the new development by Highpointe, but the developer’s new plan had that property swapped with a piece of land owned by the city.

Mayor Buddy Choat spoke up to respond to Cox.

“We own a piece of property already,” Choat said. “The plan was to build a new Board of Education building there before they even came in with a development agreement.”

Choat said he had not personally had a conversation with the developers. In fact, he said the land swap for the BOE building was an offer made by the developer after they went back to the drawing board to come up with a new plan to make adjacent landowners happy.

After the mayor’s response, Cook once again asked a question concerning any possible involvement of members of the council.

“Has anyone on this council helped Mr. Conner, Mr. Farmer, anybody in your group on this final plan?” asked Cook.

Cook was asked to clarify his question.

“My question is, has anybody on this bench right here helped you or your team on the development of this piece of property?” asked Cook.

“No,” said Stovall. “We have had discussions with members of the city council about what they liked and didn’t like about our plan.”

Stovall said he had one-on-one conversations with individual council members about what they wanted and didn’t want to see for the city of Trussville. He said those suggestions were taken as just that.

Cook spoke with emotion while questioning the developers and at the next council meeting, he spoke up against approving the rezoning. However, the rezoning passed 3-2 on July 23.

The issue that had been hotly debated for months would have been put to bed that night. But instead, it was brought up once again during the Aug. 8 pre-council workshop. Councilman Dr. Zack Steele voiced his concerns about how Perry’s question was presented. 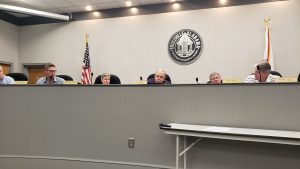 Steele said when he heard that question, he had an immediate feeling Cook was referring to him. Steele said he discussed the project with the developers on several occasions. Steele said he had concerns about the plan’s original placement of the BOE building and other aspects of the plan.

“I got the feeling when that was brought up that someone had done something wrong. I mean, is that your feeling?” Steele asked Cook.

Cook said he only asked the question to get an answer and that he did not mean to imply anyone had done anything wrong.

Steele said while he did not help with the development of the plan, he did make suggestions outside of a public hearing.

Steele said he didn’t think the question was something Cook asked in order to cause a disturbance, but he said it did cause more questions to be asked by members of the public.

“We had people on social media saying that we were taking kickbacks under the table,” said Steele.

Councilman Alan Taylor said he wants the minutes from the July 9 meeting to be cleared up to reflect that there was no wrongdoing on the part of any council member.

“In my opinion, when the question was raised several times that night … there was an implication that something was done wrong up here,” said Taylor. “That was the implied situation. That’s now a part of permanent record.”

Taylor said since the question was asked, it will be reflected in the minutes, but he hopes to clarify the intention of the question at the next council meeting.

Councilman Brian Plant said the way Cook asked the question insinuated something illegal was done and he said that was not the case.

“I’ve been doing this for 19 years and I’ve met with a lot of people,” said Plant. “I don’t think there’s anything wrong with us meeting with people.”

Plant suggested making a footnote on the July 9 minutes to see the minutes of the Aug. 13 meeting.

City Clerk Lynn Porter said she would find out if that was a possibility.

Mayor Choat said when Cook added the word “really,” after his question, that he and the rest of the council felt there was a question of their integrity and character.

After the workshop, Cook said he regretted using that word.

“I mean, I really thought we don’t need to do that,” said Cook. “I probably shouldn’t have said ‘really?’ I did get emotional and if I could retract that I probably would.”

Cook said he didn’t want to rush plans for the Hamilton Property. He said it matters to him because he wants to hear from all residents about what they want to see for the city.

“I got numerous emails and Facebook conversations,” said Cook. “I feel like I owed it to them. It’s their city, not our city.”

Cook said he does not believe members of the council should tell developers what aspects of a plan they would pass before the plan is presented in a public setting.

“I did not mean to imply that it was unethical, immoral or against the law,” said Cook. “I just want to know if anyone helped. I’d like for the citizens to know how this development got done.”

Cook said Steele told the developer that he was glad he listened to his suggestions, during a meeting with Mayor Choat. Steele admitted that and said it is his job to get involved in what’s happening in the city.

“I did not like the implication that I or anyone was doing something wrong by sitting down with the developer and personally expressing concerns,” Steele said. “I feel like it’s our job to engage people to ensure the best outcome for the city. And in this case, because of our engagement, we will now have eight acres of park space with walking trails and a green area rather than 16 acres of razed property next to a neighborhood.”

Steele said he appreciates Cook’s passion on the issue.

“At the end of the day, we all want what’s best for our city,” Steele said. “We may not always agree, but we can listen and respect the folks on the other side of a debate.”

During the city council meeting on Tuesday, Aug. 13, Cook addressed the council after the minutes from the July 9 and July 23 meetings were approved.

“If I could go back and ask my question again, I would,” said Cook. “I would have omitted the word ‘really’ as a comment I made, an emotional comment. Because it sounded as if I was insulting or insinuating that anybody did anything wrong, I apologize for that.”

Cook said he had no indication that anyone had done anything illegal, immoral or unethical.

“I feel that we all want the best for our city,” Cook said. “I respect my fellow councilmen and mayor for the jobs that they do and I apologize for saying something like that.”