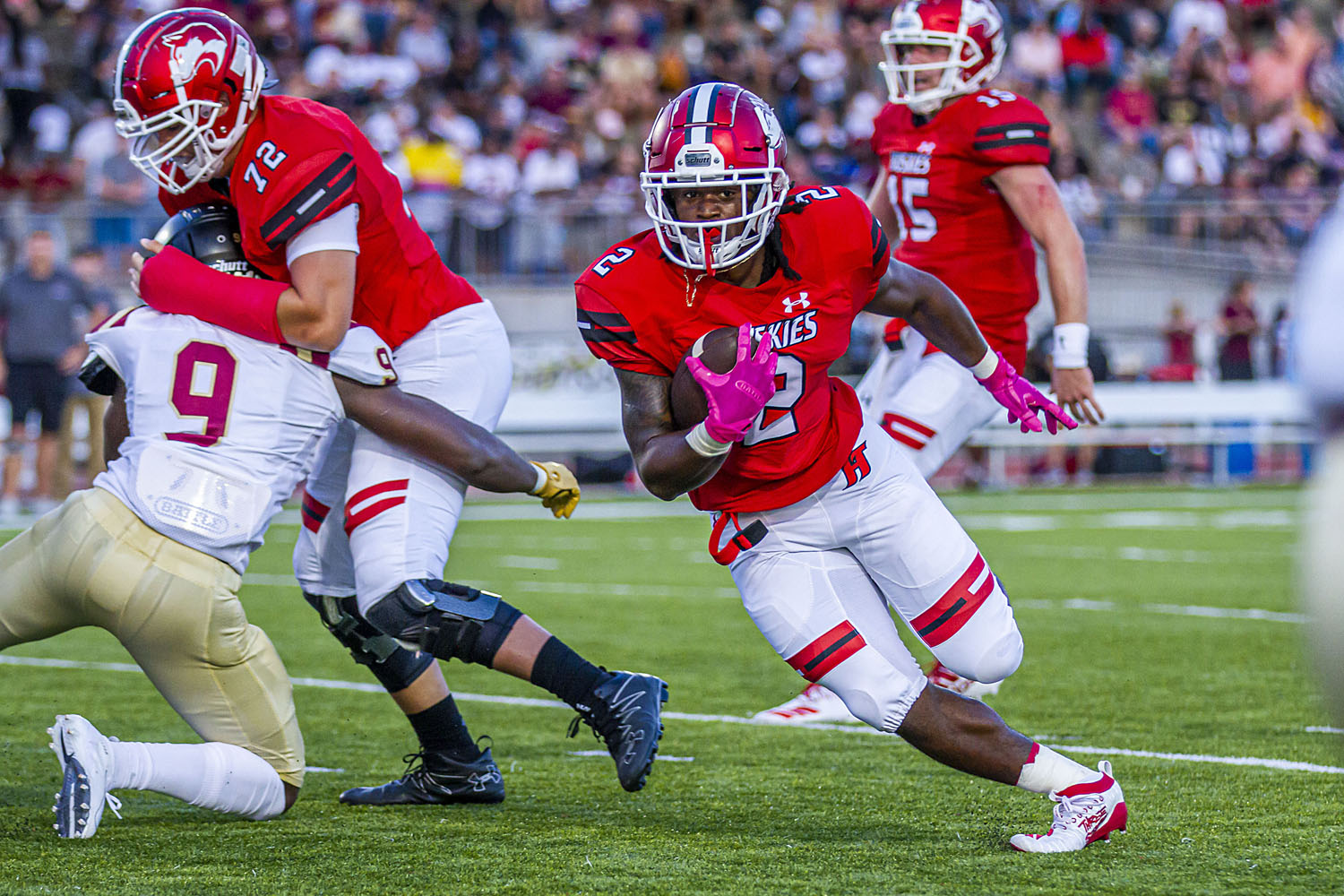 TRUSSVILLE — Hewitt-Trussville has not opened a season at home since 2017.

Going forward, the Huskies might want to reconsider scheduling more home openers in the future following a classic on Friday night that showcased the talent of two-time Class 6A champion Pinson Valley and the grit and determination of Hewitt-Trussville.

Before a frenzied crowd, the Huskies defeated Pinson Valley, 40 – 33, behind Auburn running back commit Armoni Goodwin’s four touchdowns and 218 rushing yards. The junior was the glue that held the Huskies intact after starting quarterback Seth Shelnutt left the game late in the second quarter with what appeared to be a leg injury.

“Armoni has had a great offseason,” Hewitt-Trussville head coach Josh Floyd said. “He has a lot of God-given ability. He’s a great kid that works hard. He just got stronger and stronger this offseason. He’s gotten in better shape and you saw that tonight.”

Pinson Valley entered the game tasked with replacing former starter and now current Auburn starter, Bo Nix. In his place, Pinson Valley turned to Barry White to start the 2019 campaign. The senior handled the pressure with ease. He finished 14-of-24 for 166 yards with four touchdowns and one interception. 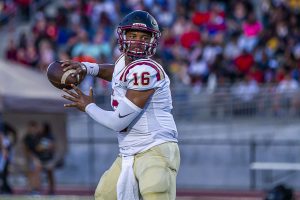 White’s arm was on display early. On just the third play of the game, White hit Jaquel Fells for a 77-yard touchdown drive that took all of 38 seconds. At first glance, Pinson Valley appeared to not have skipped a beat despite being months removed from serious competition.

Undaunted, Hewitt-Trussville returned the favor with a methodical drive on its first possession that ended with a 22-yard touchdown run from Goodwin. The tit for tat continued as Pinson Valley responded in kind as White connected on his second touchdown pass. He hit Ga’quincy McKinstry, Alabama’s No.1-ranked prospect in the 2021 class, on a 26-yard touchdown reception.

The evening threatened to derail for the Huskies late in the first quarter as Pinson Valley looked to increase its 14-6 lead. But with the Huskies’ backs to the wall, cornerback Malachi Moore intercepted a pass in the endzone to end the Indians’ threat. Shelnutt would throw an interception of his own on the Huskies’ next drive; however, Pinson Valley was unable to capitalize, which left the door cracked for Hewitt-Trussville.

The Huskies subsequently narrowed the Pinson Valley lead to 14-12 midway through the second quarter on a 4-yard Goodwin touchdown run. And just as a seesaw tips, back and forth, Pinson Valley had its turn on the upswing as it answered the Huskies’ rally with a seven-play drive that culminated in a 2-yard touchdown run from Jaytorian Sharp.

Now, facing a 21-12 deficit right before halftime, and with Pinson Valley harnessing most of the momentum, Goodwin shouldered the ever-increasing burden of remaining blow-for-blow with the Indians and responded with a 53-yard touchdown run to bring the Huskies back to within three points, 21-18. This capped off a first half in which Pinson Valley led throughout, but the Huskies had done just enough to stay within striking distance.

The opening to the second half skewed heavily in the Indians’ favor, though. Set to receive, Hewitt-Trussville muffed the ensuing kick, which gave the ball back to Pinson Valley on Hewitt-Trussville’s 15-yard line. The Indians subsequently scored on an 8-yard touchdown pass from White to Keyonteze Johnson.

The Pinson Valley lead ballooned to 27-18.

Enter the Hewitt-Trussville workhorse: Goodwin. He became the catalyst for the Huskies. After his 40-yard burst late in the third quarter helped set up a 3-yard touchdown run from Sean Jackson, the Pinson Valley lead was struck to two points, 27-25. 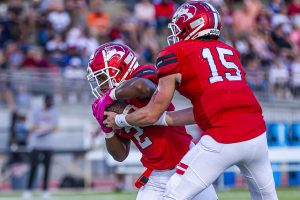 The final stretch of the fourth quarter swung in the Huskies’ favor. They took their first lead of the game early in the quarter after Pinson Valley fumbled a punt on its 35-yard line. Both teams combined to commit four turnovers in the game. Hewitt-Trussville capitalized on the mistake with a 17-yard Omari Kelly touchdown run that put the Huskies up, 33-27.

“Both teams, obviously, weren’t totally crisp,” Floyd said of the amount of turnovers. “But, it’s the first game of the year. (Pinson Valley) is very similar to us; There’s a lot of unknowns … I’m just proud of our team. We found a way to win.”

Pinson Valley would respond to even the game with a 13-yard touchdown pass to Johnson from White, but it was Goodwin who sealed the deal for the Huskies. His 39-yard touchdown run with 2:34 left in the game concluded a six play, 65-yard drive that put the Huskies up for good and dealt Pinson Valley’s Patrick Nix just his second loss as head coach of the Indians (28-2).

“Those guys don’t lose,” Floyd said of Pinson Valley. “They know how to win. Our guys know how to win too. It all worked itself out in the end for us.”