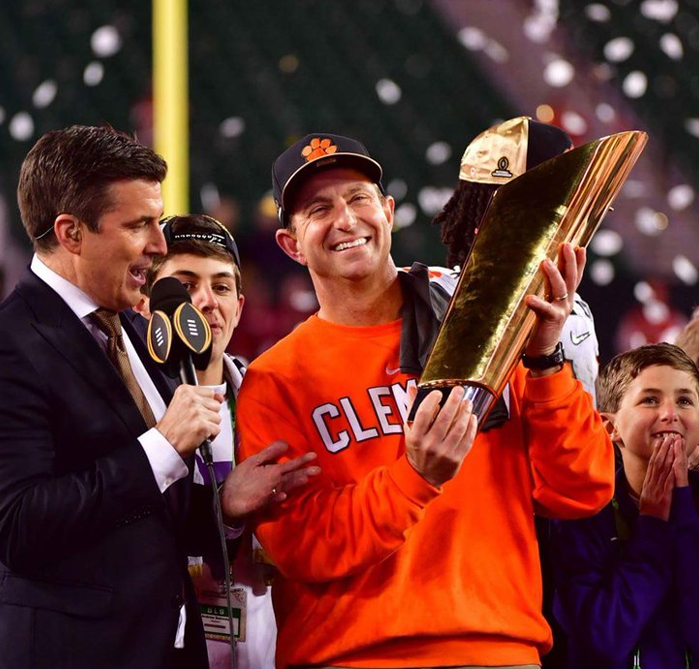 CLEMSON, S.C. (AP) — Clemson coach Dabo Swinney knows how to draw a crowd. Hold one, too.

Whether he is out running errands in Clemson, watching his sons play high school football a few years back, taking batting practice at St. Louis Cardinals camp or smiling in front of packs of TV cameras, the two-time national champion Swinney is the center of attention. He wouldn’t have it any other way.

“It’s hard for us to get his attention sometimes when he’s out among fans,” Clemson co-offensive coordinator Jeff Scott said.

Swinney routinely talks fatherhood, religion and almost any other topic thrown his way. He is sometimes feisty (see his rant a few years back when asked about the term “Clemsoning”), yet always folksy somehow. The frequent smile is no surprise, not since he has built a program that has won two of the past three national titles and shows no sign of slowing down.

“We feel like we can continue to compete for the top,” sophomore quarterback Trevor Lawrence said.

Swinney is the prime reason why.

He was mocked by outsiders as the “Coupon Coach” 10 years ago when he was hired as full-time head coach at a salary far less than many Power Five coaches were getting. But Swinney had a drive and likeability that stood out among other candidates, then-Clemson athletic director Terry Don Phillips recalled.

“The way he relates to players is special,” Phillips said.

Phillips stood alongside Swinney two years later when some university administrators wondered if the leader who had never been a coordinator at any level was fit to continue with the Tigers. Swinney stayed and, true to his pledge when he was introduced as coach in December 2008, now has a powerhouse program that has won four straight Atlantic Coast Conference championships and made four consecutive appearances in the College Football Playoff.

“We knew if we followed our core values, we’d have success,” Swinney said.

This has all been a climb for the 49-year-old, Alabama-born Swinney.

His parents divorced when he was in high school and his family home was foreclosed upon. Swinney and his mother bounced around, staying in hotels, condos, the homes of relatives or friends. When Swinney enrolled at Alabama, he moved his mother into the dorm with him.

Swinney was a walk-on receiver with the Crimson Tide, eventually earning a scholarship as a senior on the 1992 national championship team. He joined the staff of his mentor Gene Stallings as a graduate assistant and remained at his alma mater coaching tight ends and wide receivers until head coach Mike Dubose was fired after the 2000 season.

Swinney, needing a job, sold commercial real estate in Birmingham, Alabama — “I was pretty good at it,” he jokes frequently — when he got a call from Tigers coach Tommy Bowden about coaching receivers for Clemson.

Five years later, Swinney was the interim coach and starting his path to the top.

Swinney is seen by many as college football’s affable pal, the 180-degree opposite to the stern, often prickly Alabama coach Nick Saban. Both styles can work, said Mark Richt, the former Georgia and Miami coach who is an analyst for the ACC Network.

Richt got his start working for hard-driving coach Howard Schnellenberger, then spent 15 years at Florida State under Bobby Bowden.

“It was a totally different experience,” Richt said. “But we had success in each place.”

With Swinney’s success comes rewards (he received a 10-year, $93 million contract extension in April) and criticisms.

A report filled with anonymous comments came out after Clemson’s appearance at the White House that said many of the Tigers’ African American athletes didn’t go and those who attended did so because they worried about Swinney cutting playing time. The coach strongly denied any pressure on players or coaches to show. Several prominent players, including high-round NFL picks defensive end Clelin Ferrell and cornerback Trayvon Mullen, came to Swinney’s defense.

Last week, Swinney started his media session talking about how 21 years earlier he was awaiting the birth of oldest son, Will, who is now a junior receiver with the Tigers, and then talk turned to being voted No. 1 in the preseason AP poll.

Swinney scrunched up his face and said, “I guess that beats not getting ranked at all because you stink.”

Clemson should not stink this season.

Lawrence leads an offense packed with playmakers like ACC player of the year Travis Etienne, a tailback, and receivers Tee Higgins and Justyn Ross. The defense, despite losing its front four to the NFL, is almost as deep entering this season.

“When that train gets rolling,” Richt said. “It’s hard to slow down.”