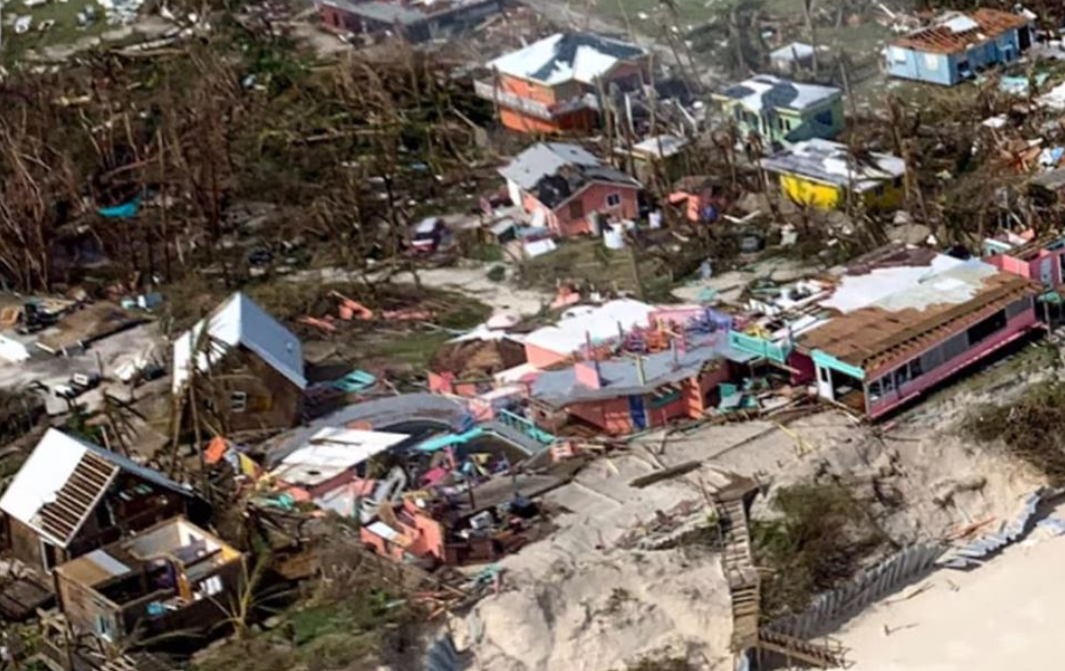 ABACO, Bahamas (AP) — Lugging empty suitcases, plastic buckets and backpacks, dazed survivors of Hurricane Dorian made their way back to the shantytown where they used to live, hoping to gather up some of their soggy belongings.

The community was known as The Mudd — or “Da Mudd,” as it’s often pronounced — and it was built by thousands of Haitian migrants over decades. It was razed in a matter of hours by Dorian, which reduced it to piles of splintered plywood and two-by-fours 4 and 5 feet deep, spread over an area equal to several football fields.

A helicopter buzzed overhead Thursday as people picked through the debris, avoiding a body that lay tangled underneath a tree branch next to twisted sheets of corrugated metal, its hands stretched toward the sky. It was one of at least nine bodies that people said they had seen in the area.

“Ain’t nobody come to get them,” said Cardot Ked, a 43-year-old carpenter from Haiti who has lived 25 years in Abaco. “If we could get to the next island, that’s the best thing we can do.”

Ked was one of thousands of desperate people seeking help in Dorian’s aftermath. With winds of 185 mph (295 kph), the hurricane obliterated houses on the Bahamas’ Abaco and Grand Bahama islands, home to some 70,000 people. The official death toll from the government stood at 20 and was certain to climb. 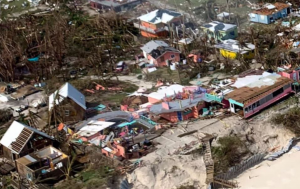 Search-and-rescue operations and an international humanitarian effort to help the victims picked up speed, with emergency officials fanning out across the stricken areas and tracking down people who were missing or in distress. Crews began clearing streets and setting up distribution centers for food and water.

“That is moving extremely well,” said National Security Minister Marvin Dames. “This is not our first time around the track.”

A British Royal Navy ship docked in the Abaco islands distributed supplies to hurricane survivors. The United Nations announced the purchase of eight tons of ready-to-eat meals and said it will provide satellite communications equipment and airlift storage units, generators and prefab offices to set up logistics hubs for helping the estimated 76,000 people who will need food and other relief.

In Grand Bahama, a Royal Caribbean cruise ship dropped off 10,000 meals, 10,000 bottles of water and more than 180 generators, as well as diapers and flashlights.

Crews in Grand Bahama worked to reopen the airport and used heavy equipment to pick up branches and palm fronds. Lines formed outside gas stations and grocery stores.

“People will be out of jobs for months,” 67-year-old wood carver Gordon Higgs lamented. “They’ll be homeless, no food. Nothing. The Bahamas has become like a Third World country.”

On Thursday, medical officials moved hundreds of people left homeless by the storm out of the main hospital in Abaco to shelters in schools and other government buildings. Some were angry at being asked to leave, or at not being allowed to freely enter to visit hurt relatives, and a shouting match erupted at the main door between a small group of hurricane victims and Bahamas marines.

Abaco and Grand Bahama islands are known for their marinas, golf courses and all-inclusive resorts and are home to many fishermen, laborers and hotel workers.

Samson Kersint, a 38-year-old who worked in a lumberyard and has been in the Bahamas since 1998, was among those who lost their homes in the dirt-path shantytown.

“We walking like zombies,” he said as he walked around The Mudd with a backpack. “We ain’t find no one to talk to us. Ain’t no water, no light.”

The dead included the sister-in-law of Benatace Pierre-Louis, 57, who collects and sells scrap metal. He said she died in The Mudd after she got hit by plywood as she tried to escape the storm.

“They gone, but we can’t do nothing,” he said, adding that Bahamian immigration officials had visited The Mudd ahead of Dorian and told people to go to shelters.

Elsewhere across the Bahamas, the injured included 89-year-old Sylvia Cottis, who uses a wheelchair. She had a gash on her right knee, along with infected wounds in her calf from shards of glass from a blown-out window.

Before she was rescued Wednesday, Cottis had spent days sitting in her wheelchair and the nights sleeping in a metal lawn lounger surrounded by wet belongings and sewage after the septic tank overflowed with floodwaters.

Among those who looked for anything salvageable at The Mudd was Ilphody Norvilus, a 37-year-old painter. He clutched a big white plastic bucket as he picked up rubber sandals, white plastic plates and a big purse.

Americans who found flights back to the U.S. were relieved to get off the islands.

Missionaries Buddy and Kerri Mullins rode out the storm in three different structures, moving from one to the next as each became unsafe.

The couple had been staying in an apartment near a church in Man-O-War Cay. When the apartment started to give way, they ran next door to the church’s fellowship hall and stayed until the eye of the storm arrived, when they fled to a nearby concrete home.

As soon as they got there, the storm’s fury returned and the roof began lifting off.

“We moved into their bathroom, about 10 of us,” Buddy Mullins said Thursday after returning to Fort Lauderdale. “I prayed two solid hours while those walls and things shook.”

When Maya Long stepped off the plane with her four children, she immediately started to cry, “knowing finally that we are all alive, just knowing that we’re safe.”

The family lives on a sailboat and had just finished delivering school supplies to needy children in Abaco when they heard about the hurricane. They rode out the storm at a friend’s home until the roof blew off and then sought shelter at a nearby school.

The sailboat sustained serious damage, including a lost mast. Her husband is still in the Bahamas assessing the damage.

“That was our home. We don’t have a home anywhere else,” a teary Long said.