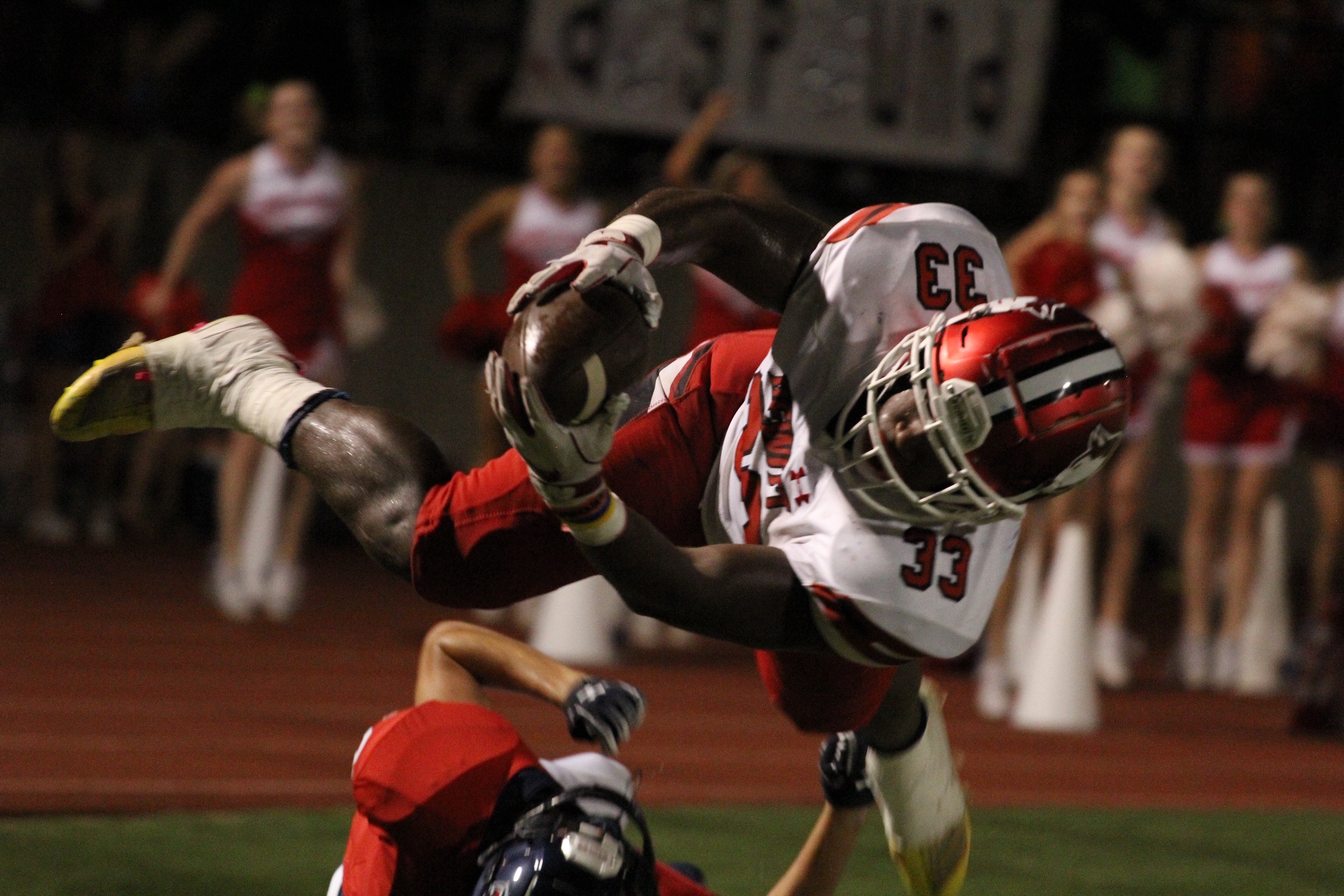 BIRMINGHAM — In the end, all Hewitt-Trussville needed was a steady dose of thunder and lightning to quell a determined Oak Mountain squad, 50-33, on Friday to move to 3-0 on the season and more importantly, 1-0 in Class 7A Region 3 play.

“Oak Mountain always plays our tails off,” Hewitt-Trussville head coach Josh Floyd said. “I told the guys, ‘They’d put the ball on the ground 10 times before they play us and then they play use they’re perfect.’ Give their quarterback credit, he did a good job. They have some good backs and we knew they were going to play a lot better this week.”

As in nature, lightning struck first in the form of Hewitt-Trussville’s Armoni Goodwin. The junior took the opening kickoff 94 yards to put the Huskies up first and set the tone in what became a close battle between the region foes. Goodwin also rushed for two touchdowns on the night before his evening was prematurely ended by way of injury midway through the fourth quarter on a failed two-point conversion.

He watched the remainder of the game leaning on crutches with his right knee wrapped. Yet, prior to his departure, Goodwin was nearly unstoppable. His two touchdowns came on runs of 45 and 8 yards.

“I don’t think there’s a better backfield around,” Floyd said of both Goodwin and Sean Jackson. “Those guys are just special backs. They play hard. They block for each other. Armoni and Sean … I wouldn’t want anybody different than those two guys. They’re special kids.”

His thunder buddy, Jackson, plowed his way through the Eagles’ defense with ease. Despite his stout frame, Jackson surprised Oak Mountain with his deceptive quickness and his ability to plow through defenders. Jackson finished the night with 14 carries for 169 yards and two touchdowns.

With Goodwin gashing the Eagles’ defense most of the night, Jackson was able to pinball his way around the field against a tired Oak Mountain defense.

“He’s such a beast,” Floyd said of Jackson. “He’s such a physical kid, but he can run. I think he’s a lot faster than people give him credit for. He’s a Division I running back. He’s a big-time player.”

In the first quarter, both offenses did little to indicate the eventual turn toward an offensive shootout. The Huskies did trail, albeit temporally, as Oak Mountain jumped ahead in the waning moments of the first quarter, 7-6, on a 30-yard touchdown pass from Evan Smith to Noah Young. But, a 47-yard touchdown run from the Huskies’ Jackson, and a redzone interception from Samuel Washington followed by 45-yard touchdown run from Goodwin put the Eagles on notice: Nothing tonight was going to be easy.

Oak Mountain received the message but failed to heed it. The Eagles narrowed the lead to 22-20 early in the third quarter and then again narrowed it to 30-27 on a 58-yard touchdown run from Judah Tait with seven minutes left in the third. Hewitt-Trussville, however, continued to grind with the run game. Goodwin’s 5-yard plunge midway through the third quarter put the Huskies up 38-27 before Oak Mountain mounted a final gasp to pull within 38-33.

From there, Hewitt-Trussville relied on a 1-yard touchdown from quarterback Cade Carruth to hammer in the final nail. Carruth was solid on the night. His conversion on fourth and four early in the third quarter set up a Goodwin touchdown that answered a previous Oak Mountain scoring drive. Throughout the evening, his demeanor from the pocket was noticeably confident and his passes were crisp and on point.

Carruth threw for 214 yards on 21-of-27 passing for one touchdown. He favorite target on the night, Dazalin Worsham, caught 10 passes for 101 yards.

With the offense clicking as it has through three games this season (the Huskies have scored over 40 points in each game) next week’s clash at Hoover will be one for the ages. The win against Oak Mountain only fueled the fire for next week’s region showdown. Yet, as nearly every coach will tell you: one game at a time.