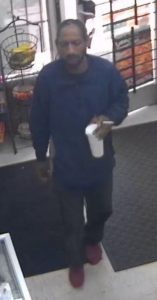 BIRMINGHAM — The Birmingham Police Department is investigating a shooting after a suspect fired multiple shots at an individual on Saturday in the 2000 block of Avenue V.

One of the rounds entered the occupied building of Limbaugh Toyota. There were no injuries in this shooting. The BPD released a crime alert with surveillance footage of the suspect.

According to the alert, the suspect is a black male driving a black Silverado.

Of note: The BPD requests anybody with information regarding the identity of the suspect to contact the BPD felony assault detectives at 205-254-1764. To remain anonymous, contact crime stoppers at 205-254-7777.

A cash reward will be offered if a tip leads to a conclusion.