BIRMINGHAM — Twenty-nine deputies throughout the state of Alabama received their APOST certificates on Tuesday during a commencement ceremony for the Jefferson County Sheriff’s Academy Session 54 at Lakeside Baptist Church in Birmingham. 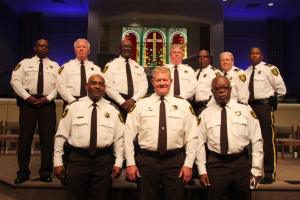 Of the 29 graduates, 12 will become new deputies in Jefferson County. Judge L. Scott Coogler of the U.S. District Court of Alabama was the commencement speaker for the event.

“It is imperative that you continue your training, for your own personal safety,” Coogler said. “Last night in Tuscaloosa, two little girls lost their dad. It can happen in a blink of an eye. This job is hard enough and that’s why you train so much so when you get off you can go home at night. I know you will come to love this job the way I did … Heroes put themselves in harm’s way because that’s what they do.”

Following the speeches, awards were handed out to deputies who displayed excellence in the following areas: