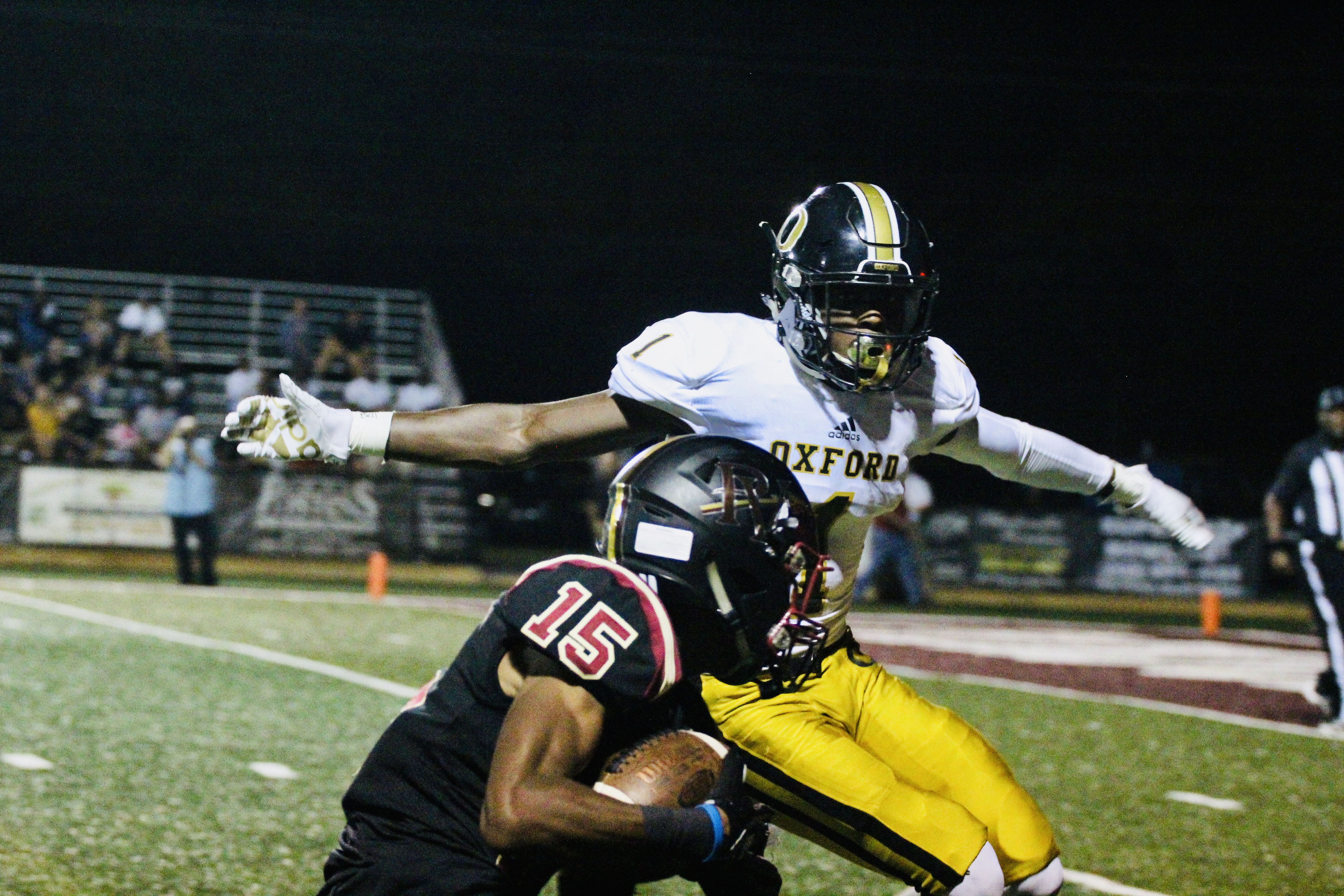 Oxford stuns Pinson Valley to remain undefeated on the season

PINSON — By most accounts, Oxford entered the Class 6A Region 6 matchup against Pinson Valley boasting of an undefeated record earned through wins against inferior opponents. Well, after Friday night, Oxford can now say that statement is baloney. The Yellow Jackets traded blows with the back-to-back state champion Indians in what became a game of momentum and soul-crushing plays en route to a 34-33 victory.

“I’m happy for our kids,” Oxford head coach Keith Etheredge said. “They fought their rear ends off. I’m super proud of them … These kids just fight. I love their heart. They want to do some things that have not been done in Oxford in a long time.” 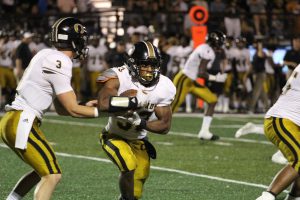 Pinson Valley opened the game in dominating fashion. The Indians took advantage of a blocked punt, a conversion on fourth and 2 and a 12-yard touchdown run from Kenji Christian to take the first lead of the night, 6-0. Soon thereafter, Pinson Valley quarterback Barry White hit Keyonteze Johnson on a 51-yard pass that set up Johnson’s 8-yard touchdown reception, 12-0.

Johnson proceeded to haul in his second touchdown of the night on a pass from White as the two connected on a 38-yard reception to put the Indians up, 19-0. On most occasions, a deficit that early against one of the best teams in the state would be unsurmountable. But for Oxford, it meant little as the Yellow Jacket’s defense switched to zone, its offense cranked up the intensity and then proceeded to befuddle the Indians to the tune of 27 straight points.

“We went a little more zone,” Etheredge said. “We were taking some chances playing man. They have some great receivers. We backed off a little bit and gave them some underneath stuff. We took away the long stuff.”

Oxford quarterback Trey Higgins had four touchdown passes for Oxford, including a pair of third-quarter receptions to Roc Taylor and an 83-yarder to Devion Bell to open the game.

As reliable as White was in the first quarter, he was the polar opposite in the second and third quarters. His consecutive interceptions in the third quarter turned a 19-7 halftime lead into the Indians’ first deficit of the game. The interceptions followed a 21-yard touchdown pass by Oxford on its opening possession of the second half that added to the pressure that Oxford was already placing on Pinson Valley.

The momentum had completely swung the Yellow Jacket’s way as a result of Pinson Valley miscues and untimely turnovers. Oxford would score three touchdowns in the third quarter, and Pinson Valley would not respond until midway through the fourth when it scored its first points in the second half on a 2-yard touchdown run by Christian.

The Indians would then be saved by the grace of luck following the touchdown as they promptly recovered a muffed punt on Oxford’s 26-yard line. White shook off the erratic tendencies that hindered him throughout the second and third quarters and hit Ga’quincy McKinstry on a dime from 23-yards out to put the Indians up 33-27 with 4:53 left in the game.

Johnson had eight receptions for 157 yards and McKinstry added 109 yards on eight catches. 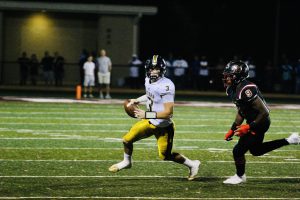 It then went from good to bad in the span of an airborne ball for Pinson Valley. With Oxford trailing by six and in desperation mode, the Yellow Jackets relied on two on-a-hope-and-prayer heaves to first extend the game and then to take the lead. The second pass, with two minutes left in the game, came on a desperation throw into the endzone that at first appeared to be intercepted by Pinson Valley’s Markel Dailey, only for the ball to bounce away and fall into the waiting arms of Oxford’s Miguel Mitchell for the touchdown.

“It’s an unbelievable play,” Etheredge said. “We got banged up. That was a physical football game on both sides.”

There was some time still left on the clock, however.

Pinson Valley got the ball back and drove it down to Oxford’s 20-yard line, trailing by just one point with around one minute left in the game. But faced with a fourth and one, and still with timeouts left, the Indians decided to attempt a pass, which fell incomplete.

Oxford had pulled off the upset.