Center Point heads out of region to face Homewood

CENTER POINT — The Center Point Eagles will take a breather from the gauntlet of Class 5A Region 5 play this week as they travel to face Homewood (1-3, 1-1) with the hopes of extending their three-game winning streak.

The Eagles remain undefeated in the region through five games for the first time since 2013. Since head coach George Bates arrived in 2018, the Eagles are 10-7 overall and 8-2 in the region. The turnaround has been predicated on a defense that allows just 18 points per game and an offense led by Javon Davis and Jayson Jones that averages just a shade under 30 points per game. 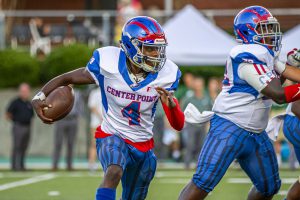 Center Point enters the contest fresh off of a victory over Saint Clair County, 54-13. In that game, Davis passed for 251 yards and four touchdowns. Jones recorded 122 receiving yards with two touchdown passes. He added 56 yards on the ground on just three attempts with one additional touchdown.

Since the loss to Mountain Brook to end August, the Eagles have allowed just 15.3 points per game in three straight region games. Center Point holds the second-best defense in the region, only behind Central Clay County — The Volunteers have given up just 19 points through three region games.

Up next for Center Point is a Homewood team that is fresh off a bye. The Patriots have had a rough go of things this season. They sit near the bottom of a Class 6A Region 5 that has just two teams above .500. Homewood has losses to Hueytown, Vestavia Hills and Helena. Its lone victory came against a Pelham team that sits winless on the season at 0-5.

Center Point will have its hands full against Homewood quarterback Pate Owen. The senior is 67-for-103 on the season for 851 yards with eight touchdowns and one interception. On the ground, Owen has rushed a team-high 36 times for a team-leading 160 yards for two touchdowns.

Owen’s favorite target this season has been Trae Ausmer. The senior has 32 receptions for 391 yards with five touchdowns. Ausmer averages 99 receiving yards per game. His longest reception on the year was 71 yards.