SPRINGVILLE — The season-long grind for Springville hits week seven this Friday as the Tigers return to Class 5A Region 5 play with a short trip over to Center Point to face the 5-1 Eagles.

The dive back into region play comes after Springville picked apart Crossville this past week behind the play of Kobye Payton and Pearson Baldwin. As refreshing as the victory over the Lions was, the stark reminder of Springville’s struggles in region play returns in the form of a Center Point team that dispatched the Tigers 54-14 in 2018.

In fact, Spingville’s remaining four games mirror that of this past season. A 2018 season in which the Tigers followed that loss to Center Point with a victory over Moody and losses to Mortimer Jordan and St. Clair County. This season, however, both Center Point and Moody have improved with Mortimer Jordan remaining in the upper echelons of Region 5.

Center Point enters the game riding a four-game winning streak with its most recent victory coming against Class 6A Homewood. In that game, the Eagles battled back from a touchdown deficit with 50 seconds left in regulation to take a one-point lead on a Jayson Jones two-point conversion.

During the game, the Eagles had little trouble moving the ball through the air. Quarterback Javon Davis finished the night 19-of-29 passing for 251 yards. The Eagles’ defense was outstanding on the night, too. The unit held the Patriots out of field goal range in the final seconds and had several defensive stops throughout the game that allowed the offense to keep the deficit to within a reasonable range. 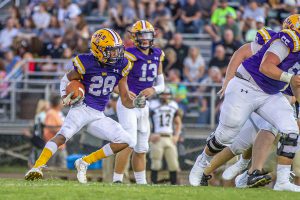 A win for Springville will do loads for head coach Michael Graben’s fight to turn around a culture that has been mired in losing. For that to happen, the defense will need to find a way to clamp down and stop the region’s highest-scoring offense. That might prove to be a problem as the Tigers have allowed over 42 points in each region game this season.

Offensively, the Tigers have several weapons with the likes of Payton and Baldwin leading the charge. Payton had a field day against Crossville. He recording a rushing, receiving and special teams touchdown — a feat similar to that of baseball’s hitting for the cycle. All he needed was a defensive touchdown to seal the deal.

Baldwin added a pair of rushing touchdowns in the victory.

Historically, Center Point has made easy work of Springville. The Eagles have recorded just one loss. But, Springville has proven this season that it’s capable of performing at a high enough level to stay at .500 this season. The next step is proving that the Eagles are capable of battling a sound region opponent.

A victory will prove that Graben’s culture-changing battle is turning the corner.