TRUSSVILLE — From morning meetings and practices, to study hall, the weight room, and to classes, the life of a freshman college football player is an experience encapsulated in a regimented environment of excitement, exhaustion and repetition.

Freshmen leave the friendly confines of home and head to an orchestrated lifestyle in college where wakeups as early as 6 a.m. are followed by an entire day scheduled down to the last second. In all, players can expect to spend about 40 hours per week just on football activities alone.

Though those days are primarily scheduled around football, academics remain a focus (school still comes first). Class checkers bounce in and out of classrooms, professors fill out progress reports and advisors meet regularly with players. It’s an exhausting indoctrination to the ever-churning machine of higher education combined with the all-encompassing presence of DI college football.

As difficult as that adjustment is for freshmen, the battle begins before they even arrive on campus. Only 6% of high school seniors will make the jump from high school to college football. Once they do, they become part of program in which the talent gap between each player narrows significantly. As such, players are placed in an environment where, for the first time in their lives, they have to prove their worth or risk becoming irrelevant. In high school, talent is the bridge to success; in college, talent only takes a player so far. Hard work, desire, reliability and growth are the keys to the next level.

That is why you hear scouts always harping that coaches do not want players who are just talented, they want athletes who are students of the game. 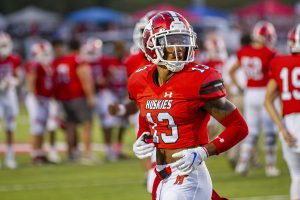 Hewitt-Trussville safety Malachi Moore acknowledges the grind ahead of him, to the point where is he is treating this season like a dry-run for what awaits him when he makes the trip west to the University of Alabama in the coming months.

“I take every practice as if I am already at Alabama,” Moore said. “Those guys there, they don’t take any reps off. People behind them are just as good as them so they work extra hard.”

That work will only escalate as the high school season progresses. Most incoming college freshmen are tasked with bridging the physical gap before they even hit campus. Once the regular season ends, seniors typically hit the gym hard in preparation for taking the field in the coming months against college players who are entering their physical prime.

That transition from playing against 13-17 year olds to playing against grown men is one of the biggest adjustments next to learning new schemes and perfecting skills such as route running, blocking assignments, hand placement, coverage and loads more. Not only are college players considerably stronger, the players are also faster and smarter. Practices ultimately become a proving ground, and the Crimson Tide’s practices are notoriously tough.

At Alabama, the combination of talent, high expectations and the continued pull of maintaining a winning culture elevates the bar so that only the most hungry and passionate players take the field.

Add in Alabama head coach Nick Saban’s quest for perfection and you have an environment where only the best succeed.

“One day when I was a freshman in practice and coach Saban was yelling at me. It almost brought tears to my eyes. I’d never had that feeling before. It was crazy,” Jackson said in a Bleacher Report story in 2016. “He does it to help you. Like they say, ‘If he doesn’t, you should be worried.'” 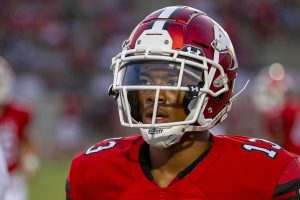 Moore is excited about joining a Crimson Tide team that has sent 87 players into the NFL over the past 11 years, which is the most in college football during that span.

“I feel great about it,” Moore, one of eight in-state commits to Alabama, said about playing for the Tide. “Just because it puts myself in a position to succeed at the next level.”

Before that dream can become a reality, Moore and the Huskies have to weather a season that has been derailed by injuries to key positions.

For Moore, he wants to take that adversity and apply it in ways that grow him as a player and a leader.

“I want to learn more about myself as a leader,” Moore said about his goals for the remainder of the regular season. “I just want to see how I can overcome adversity.”

Regardless of where the Huskies end up, Moore remains in an envious position. He is blessed with the talent to play at one of the greatest college football programs in the nation. There, he’ll share the hope of many who take to the field on Saturday: making it to the NFL.

“I want to make it to the next level to give back to my parents,” Moore said.