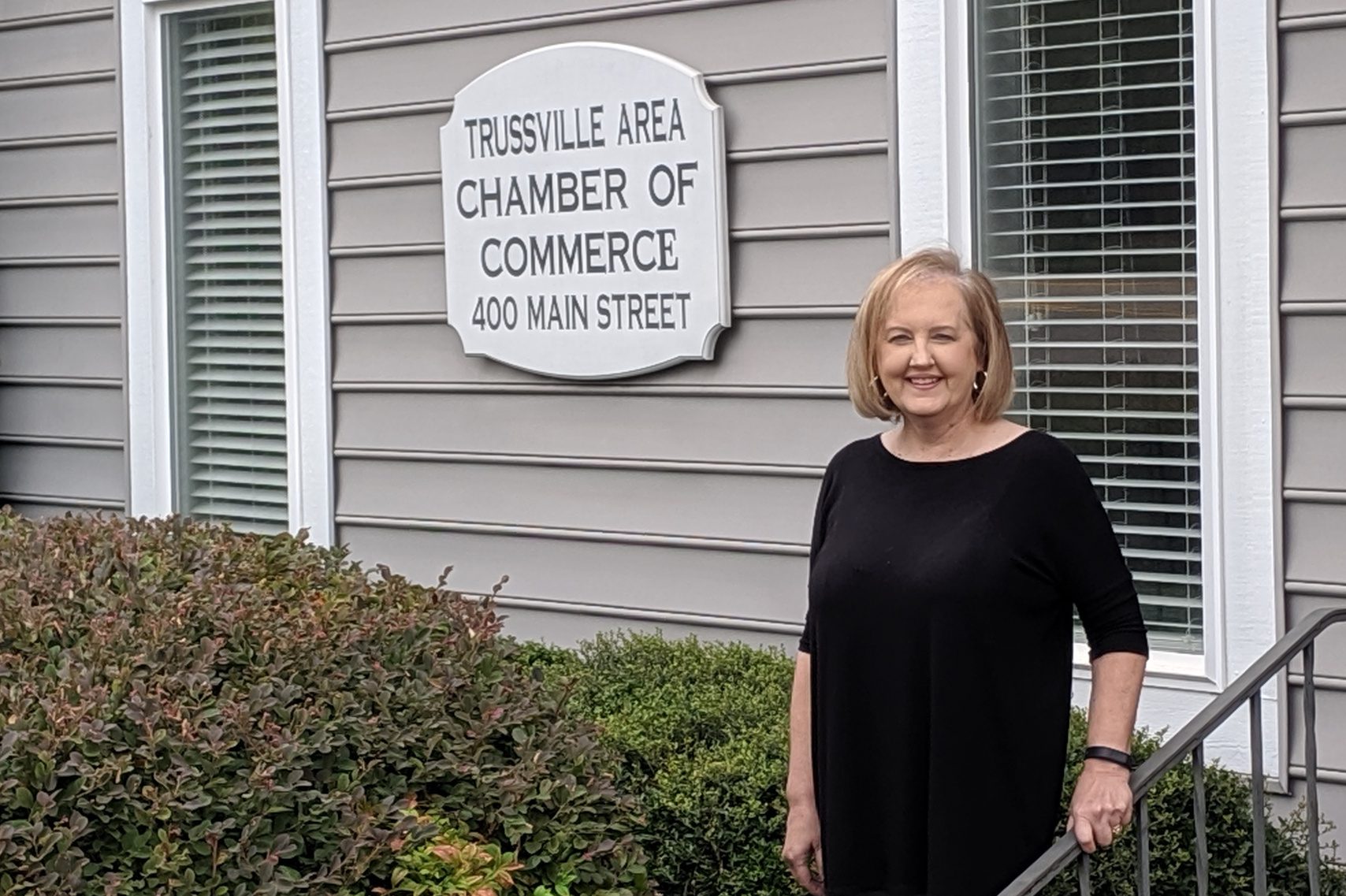 TRUSSVILLE — Every kid deserves a big sister — one who wants what’s best for you, answers your frantic phone calls at all hours, claps the loudest for your accomplishments, but isn’t afraid to whip out an embarrassing I-knew-you-when story in order to keep you humble.

In this case, the lucky kid is the city of Trussville.  And her big sister is the new Executive Director of the Chamber of Commerce, June Mathews.

Trussville is a city standing at the edge of unprecedented growth.  She is a “big small town.”  Still young enough to hold the I-went-to-elementary-school-with-your-second-cousin conversation but sophisticated enough to catch the eye of investors and big business.

That’s where Mathews comes in.

“It’s all about relationships,” said Mathews.  “That’s just how it is.  Our members are businesses, but within those businesses are people we need to be relating to.” 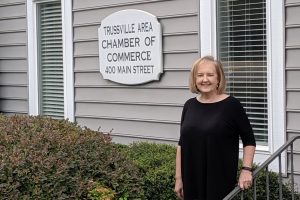 In other words, don’t let the construction dust upend you.  It’s all about balance and communication.  And if June has a superpower, it’s communication.  A journalism-turned-political science major, she has already solidified two careers, one as a writer and one in the paralegal field.  Through local publications, she has been telling Trussville’s stories for decades.

But more importantly, she’s been telling its people’s stories.  Because these are, quite frankly, her people.

“I love Trussville.  I loved growing up here.  We moved away for a couple of years when I was in college because my dad took a job in Mobile,” explained Mathews.  “And he wound up dying very young, at age 48, of a heart attack.  You know, if there was any kind of silver lining to losing my dad so young – him so young and me so young – it was that we came home.  We came home where our family and friends have always been.  So, in that sense, Trussville represents security.  Family — friends close by, it means a lot to be here.”

In 2014, June co-authored, Images of America: Trussville, alongside fellow writer Sandra Bearden.  Ironically, the opportunity came when a publishing group contacted the Chamber of Commerce in search of a local writer qualified for the job.  The book follows the city’s settlement and focuses on the great depression period when much of the city’s downtown “project” area was created.  The scope of the book was daunting but resulted in the preservation of the city’s early history, a meaningful accomplishment to Mathews.

June is soft-spoken but authoritative, with a rare blend of confidence and southern humor that makes her instantly relatable.  And it is that relatable quality that has drawn readers to her columns and keeps her personal social media accounts hopping.  She is a lemonade-on-the-front-porch style observer with an accurate sense of humor.  And that sense of humor has buckshot aim, oftentimes pelleting husband Jimmie and family and friends on social media.  On any given day, followers can scoop up a recipe for Bacon-and-Egg Spaghetti, follow her obsession with Pop-Tarts, the antics of her two dogs, Moxie and Bitsy, naughty parrot  Murray (who she half-heartedly threatens to give away on a regular basis) and husband, Jimmie.

“Poor Jimmie.  When people say ‘Poor Jimmie’ I say, well what about poor June?  I’ve had to put up with ‘Poor Jimmie,’” she said with a smile.  “But really, he catches it.”

But it is exactly this sense of place and connection to people that has grounded her in the community and makes Mathews an undeniable fit for the position of Executive Director, a title she is still getting used to.  In fact, it was a title she almost didn’t accept.

“I was not interested in this job.  Not at all,” Matthews said.  “I’d been on staff (for the Trussville Area Chamber of Commerce) for four years.  I’d been working part-time, 30 hours a week.  I volunteered a whole lot and I was on the board.  I served as president of the TACC board in 2014.  In fact, I had to resign the last quarter of my last presidency term to come on staff here.  But I loved my 30 hours a week.  It allowed me to keep accepting writing assignments, which I loved,” Mathews reflected. “When the job came open, I thought, no, I don’t want that job.  I’m sticking with my part-time and my writing.  Then, as time went on and another director wasn’t hired, I started taking on some of the duties of the Director.  And then it got to a point where I thought, well, I am doing it.  I guess I can do it because I am.  It’s just turning out to be a real opportunity for me because I love Trussville.”

While Mathews may have organically grown into the position, the new role carries its share of responsibility.  The city, as well as the Chamber’s role, is evolving daily.

“To me, that’s the beauty of working for the chamber,” said Mathews.  “There are no two days alike.  We’re always doing something different.”

Her strategy for tackling the job as Executive Director is straightforward.

“My two words these days are relationships and collaboration,” she said. “We are really intent on building those relationships – rebuilding some relationships, and really getting in there with our members. One thing that I want to do is to visit with our members one-on-one and just say ‘What do you need?  What can we do for you?  Let me tell you what the chamber can do for you.’  Asking those questions, letting them know we’re here.”

While residents are watching the transformation of Trussville’s business and entertainment district, much is taking place behind the scenes at the chamber.  With June working as Executive Director and Melissa Walker heading up events coordination, the chamber is poised for growth.  This includes internal growth and forming collaborations with businesses from outside the community that have an interest in the Trussville area.

“We have members from Hoover, for instance, because really it’s not limited to businesses that are here.  It also includes businesses that do business here.  So, people have a lot of reasons for joining the chamber,” explained Mathews.  “And anybody that’s interested in helping us build this good community, we’re interested in them.”

And just as each business has their own reason for choosing this community, each resident does as well.  They are laying down roots next to one another just as her family once did, a fact that hasn’t missed Mathews.

“We grew up playing in the Cahaba and had a big ole’ time,” Mathews said. “Daddy built us a big basketball court in the back yard. We had badminton and rabbits and dogs, and we had a great life.  We were recently out to eat with my Mom and we were reminiscing …  She put it very simply and it struck me the way she said it.  She said, ‘Y’all had some very special growing up here.’  And it’s true.  It was special for the whole family.  We were in a good place.  We were in Trussville.”