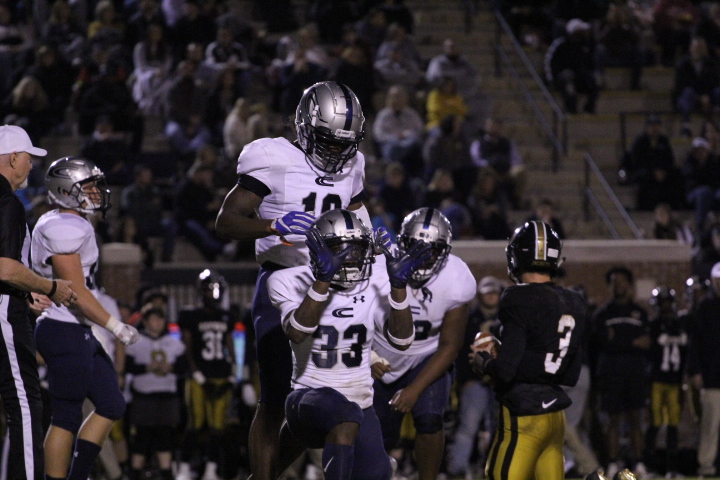 Clay-Chalkville knocks off last region unbeaten with victory over Oxford

OXFORD – After falling to Pinson Valley and Gardendale to conclude the September slate, Clay-Chalkville entered its bye week 3-2 and winless in Class 6A, Region 6.

Yet, ever since the calendar flipped to October and the smothering heat gave way to the chill of fall, the Cougars have turned the tables and have run roughshod throughout the region in what started with a 31-13 victory over Shades Valley back on Oct. 4, gave way to a 49-0 silencing over Pell City and then led to Friday night’s 26-21 win over previously undefeated Oxford.

With that, not only has Clay-Chalkville roared back onto the scene, it has now solidified a playoff spot and served notice to the rest of Region 6 that not all is assured.

It’s a notice that Oxford swallowed like a poison pill.

Throughout a game that saw more flags thrown than plays called (just slightly embellishing), the Cougars never flinched despite several questionable calls and tasked with stalling an offense that entered the night averaging nearly 40 points per game. 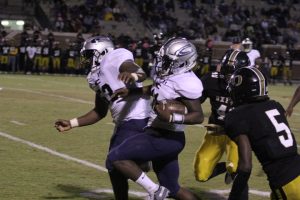 The Cougars pounced early behind a solid passing night from quarterback Damione Ward. The senior opened the show with a 26-yard touchdown pass to Edward Osley midway through the first quarter to place the Cougars on the scoreboard first.

Oxford readied a response, but a Trey Higgins pass into the endzone was intercepted by cornerback Thalen Cook to end the threat. Higgins would again throw another pick in the endzone. This time cornerback Cameron Grady snagged one with 9:51 remaining in the first half.

It was an evening of struggles for Higgins. Granted, he did manage to throw three touchdown passes — all to 6-foot-4 junior Roc Taylor. Yet for most of the night, Higgins found little success  as the Cougars applied pressure all throughout the game.

“Defensively, you have to prevent the big play down the field,” Gilmore said. “You can’t let those receivers get behind you and let them throw it up and catch it. You have to make them sustain long drives to score. If you do that, like any team, you end up shooting yourself in the foot.”

Clay-Chalkville would nurse a 7-0 lead at the half, but Oxford jumped right out of the gate in the third quarter. The Yellow Jackets marched right down the field after Clay-Chalkville went three-and-out to start the second half. Higgins hit Taylor on a 4-yard touchdown pass to even the game at 7-7.

The Cougars responded with a drive of their own that was halted after a Ward fumble that was challenged but upheld after the replay system somehow experienced difficulties. Oxford would capitalize on a 42-yard Higgins touchdown pass to Taylor.

The Cougars responded after Ward hit Jamichael Thompson on a 21-yard rope that set Clay-Chalkville up at the 1-yard line. Ward would rumble in to even the game at 14. Seconds later, on Oxford’s ensuring possession, the Yellow Jackets would cough up the ball on their 15-yard line, which led to another Ward touchdown run, giving Clay-Chalkville the lead, 21-14.

“Ward made some very good plays,” Gilmore said. “He ran the ball hard. He’s a great kid, a physical kid. He does a great job leading our offense.”

Ward finished with 170 total yards on the night.

From there, it was all Clay-Chalkville. Oxford would botch a snap on a punt, which led to a safety (The Cougars added a field goal prior to the safety. The safety ballooned the lead to 26-14). The Yellow Jackets would threaten late after Higgins hit Taylor on a 17-yard touchdown pass with 4:28 remaining in the game, but the Cougars defense held firm in the end.

“I thought we did a good job,” Gilmore said. “We just came up here and tried to play our game and attack. The kids did a good job executing the plan. They played hard and physical. That’s all we asked out of them.”