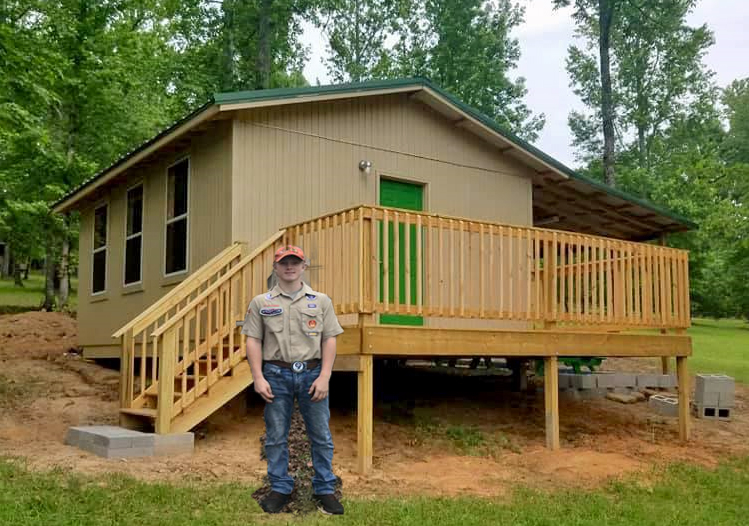 By Mechell Malone AND Erica Thomas

CLAY — There’s a new Eagle Scout in town and there is no question, he earned the title.

Alex Branaman recently completed his trail to Eagle with Clay Troop 124. His project was originally planned to be a remodeling of a building at Camp Coleman, a Girl Scout camp in Trussville. However, the project turned into a complete rebuild.

Branaman comes from a strong scouting family. He started scouting in first grade, as a Tiger Cub, and set the goal at an early age to earn the rank of Eagle.  Branaman started in Trussville’s Pack 245, where his mother was Den Leader, his uncle was Cubmaster and his grandparents were on the Pack Committee.  Branaman earned his Arrow of Light Award, the highest award you can earn as a Cub Scout, and crossed over into Troop 245.

As for the Eagle project, the initial budget was $5,500. When Branaman and his volunteers realized the building could not be saved, the plans changed and in the end, the project cost nearly $7,500. His grandfather, Aaron Tews, said the building is not only better than it was before, but it’s bigger.

“They had a 16 x 18 before, it’s now a 16 x 20, with an 8-foot deck and an 11-foot awning with two picnic tables underneath, so they can work outside,” said Tews. “The old building was not handicap-accessible, it was only accessible from the deck and, on his own, he wanted to make it handicap accessible.”

Branaman added a door and built a ramp on the rear-side of the building, to allow everyone to enjoy what he calls the “Creativity Center.”

To raise the funds needed, Branaman and his family had a yard sale. 84 Lumber came in as a corporate sponsor and donated money and gave discounts toward the purchase of wood for the new building. Branaman also made a presentation of his project proposal to the Wayfarers; they are the Girl Scouts of North Central Alabama’s alumni service group. Individuals within the group initially donated almost $1,000 toward his project, and when the project grew to a rebuild, the Wayfarers group voted to donate $1,000 to purchase tin for the roof and lumber for the deck. Branaman also received monetary and material donations from family, friends and other people that found out what an ambitious project this scout had taken on.  The project was followed on Facebook and grew to over 4,000 contacts.

“We’re just proud that he stuck with the project when it got bigger than he had planned,” said Tews. “He has grown up from a young boy and he’s really starting to shine. We couldn’t be more proud.”

So why the Girl Scout building?

When it was time for Branaman to decide on an Eagle Scout project, he wanted to do something that would help many people. He didn’t initially know that his project was close to his mom Ashley’s heart.  His mom had earned her Girl Scout Gold Award and had camped at Camp Coleman, a Girl Scout Camp in Trussville. In 1998, Ashley sent the property chair a letter asking to refurbish the craft hut as part of her Gold Award project but had been turned down.

“The sentimental part of this story is that Alex didn’t know about this letter until after he had selected this project,” said Tews.

“He’s really become his own person,” said Tews. “He’s had a lot of challenges in his life and he’s done really well and has become self-sufficient and very mature.”

On Sunday, Sept. 22, Branaman had his Eagle Court of Honor at Camp Coleman and dedicated the building to the Girl Scouts of North-Central Alabama (GSNCA) as he handed the ‘key to the building’ to GSNCA Chief Executive Officer Karen Peterlin. There were over 100 people in attendance.

Branaman graduated from Southeastern High School class of 2019 where he played football and baseball.  He currently attends Jacksonville State University and he is studying Criminal Justice to major in Forensic Investigation. His grandfather hopes his accomplishments will benefit him throughout life.