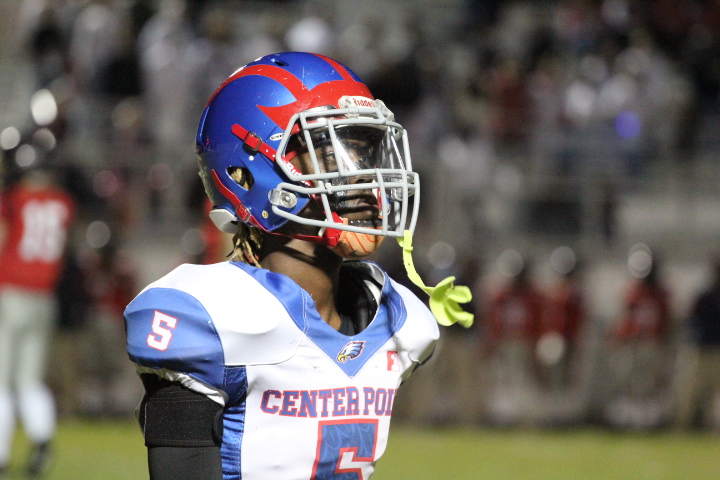 LINEVILLE – Center Point’s Class 5A, Region 5 title aspirations ended a yard short and seven points behind on Thursday as Central Clay County held on to defeat the Eagles, 19-12, behind a stout defense and a touch of luck.

Faced with a 13-12 deficit with nine minutes left in the game, Center Point drove the ball down to the 1-yard line thanks in large part to 33-yard run by sophomore running back Jaylen Taylor. The bruising back was instrumental on that drive to place the Eagles within striking distance against a Volunteer defense that had seemingly figured out how to quell Center Point’s athleticism.

But, with a first and goal on the 1-yard line, Taylor took the handoff, plunged into the thick of the Volunteer defense and proceeded to fumble the ball within the mass of bodies. 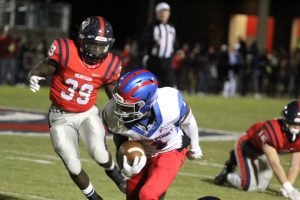 Central Clay County would recover the fumble. And just like that, the air went out of the Eagles’ sails.

“We’ve just got to finish,” Center Point head coach George Bates said. “We’ve got to control what we can control.”

Instead of scoring the go-ahead touchdown and turning the game over to an Eagles’ defense that had stifled the Volunteers all evening, Center Point was tasked with halting an invigorated Volunteers’ offense that proceeded to run the ball 99 yards, which was capped off with a soul crushing 29-yard touchdown run to break the Eagles’ backs.

Yet, Center Point had one last opportunity with less than three minutes left in the game.

However, the same magic on display in the Eagles’ last-second win at Homewood earlier this season was not to be rediscovered. The Eagles turned the ball over on downs.

“We still feel like we’re the best team in the league,” Bates said. “We played our worst game of the season at Sylacauga. We come here, and however you look at it, we just got in our own way.”

The tough sledding for Center Point in the second half was not the case throughout the first quarter. The Eagles’ offense dazzled behind the talented Jayson Jones. The senior guided Center Point to a 12-0 lead behind a 4-yard touchdown run and 25-yard touchdown pass to freshman Harold Holloman to cap off a resplendent first quarter for the Eagles.

The good times were not meant to be, though.

Center Point’s Gerry Marshall had other ideas as he picked off Ogles in the endzone and proceeded to take the ball back 100-yards for a touchdown; however, the play was called back because of penalties. Center Point still retained possession, but the Eagles were unable to capitalize after yet another stalled drive.

“Either we are just entirely undisciplined,” Bates said. “Or yellow needs to be one of our school colors. We seem to see a lot of flags on the field when we play away.”

To add to Center Point’s woes, the Eagles had the ball within Central Clay County’s 8-yard line with 1:45 left in the first half, but they were unable to punch it in. Now instead of heading into the half holding a three-touchdown lead, Center Point only nursed a six-point lead that was subsequently erased just three minutes into the third quarter behind a 57-yard touchdown pass from Ogles to Javon Wood.

Center Point’s offense all but vanished from there.

The Eagles’ defense continued to shine, though. Time and again, the unit bent but never broke. Case in point: With three minutes left in the third quarter, a high snap sailed over Center Point’s Javon Davis’ head and was recovered by Central Clay County on the Eagles’ 19-yard line. Center Point’s defense would then force a turnover in kind with a Noah Steen interception to halt the seemingly imminent threat.

That interception led to the drive that resulted in the game-altering fumble.

“I know we have a dang good football team,” Bates said. “We’ll get ready for our first-round opponent.”