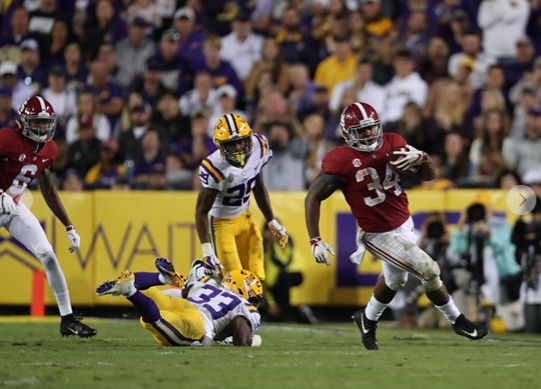 The No. 1 vs. No. 2 game between Alabama and LSU in two weeks looks set, though the order of the Crimson Tide and Tigers changed in the AP Top 25 in one of the closest votes ever.

Heading into an off date for both teams, LSU flip-flopped with Alabama on Sunday to become the new No. 1 in The Associated Press college football poll presented by Regions Bank. The Tigers received 1,476 points, two more than Alabama, for the closest margin between 1 and 2 since No. 1 Florida State was two points ahead of Auburn on Oct. 5, 2014.

No. 3 Ohio State was not far behind with 1,468 points. Eight points separating first from third is the fewest during a regular-season poll since the current point system went into place in 1978. The previous low was Dec. 3, 1979, when No. 1 Ohio State was 10 points ahead of No. 3 Southern California, with Oklahoma in between, two back of the Buckeyes.

Sam McKewon of the Omaha (Nebraska) World-Herald has switched No. 1 teams three times, going from Clemson to Alabama to Ohio State.

“When I’ve switched teams, I’ve done it based on performance and the quality of the teams each has faced,” McKewon said. “Ohio State is the best combination of those two components for me.”

The Alabama-LSU game is scheduled for Nov. 9 in Tuscaloosa, but the top of the rankings should be locked until then. LSU, Alabama, Ohio State and No. 5 Penn State are all off next week, and No. 4 Clemson is tuning up against Wofford.

Oklahoma became the third top-six team in the last three weeks to lose to an unranked team, falling at Kansas State and dropping five spots to No. 10.

There was a lot going on at the top of the ranking this week.

This is the second time this season the No. 1 team won and dropped out of the top spot. Preseason No. 1 Clemson was the first, back in late September. The last time it happened twice in a season with different teams was 2009, when Florida and Alabama dropped out in consecutive weeks.

Brooks Kubena, who covers LSU for The Advocate, made the switch to LSU at No. 1 from Ohio State this week. He said the Tigers’ victories against No. 6 Florida and No. 11 Auburn, plus a road victory at Texas, which was No. 9 at the time, swayed him.

“Wins matter and who you beat matters, and LSU’s three victories over top-10 opponents is the most impressive resume of all undefeated teams,” said Kubena, who had Clemson at No. 1 to start the season.

GAMES OF THE CENTURY

Barring some weirdness with the voters next week, Alabama-LSU will be the 26th 1 vs. 2 regular-season game, including conference championship games. The No. 1 team is 15-8-2, including LSU’s 9-6 victory at Alabama in 2011, the last time 1 and 2 met in the regular season.

The advent of the Bowl Championship Series in 1998, and then later the College Football Playoff, have created frequent 1-2 matchups during bowl season. Overall, No. 1 is 28-21-2. After LSU and Alabama played as 1 and 2 in the regular season, they had a rematch in the BCS championship game in January 2012 won by the Crimson Tide.

Heading into that BCS championship was the last time LSU was No. 1.

— No. 22 Kansas State returned to the rankings after a brief stint in September.

— No. 24 Memphis also returned after a one-week stay earlier this month.

— Texas fell out of the rankings for the first time this season after losing its third game , this time to unranked TCU. The Longhorns’ other losses were to LSU and Oklahoma.

— Iowa State continues its yo-yo season, falling out of the rankings again after losing at home to Oklahoma State.

— Arizona State is out again after being upset by UCLA.

No. 6 Florida vs. No. 8 Georgia. The World’s Largest Outdoor Cocktail Party will likely decide the SEC East.

No. 15 SMU at No. 24 Memphis. First on the line in the AAC West, maybe the country’s most entertaining division.