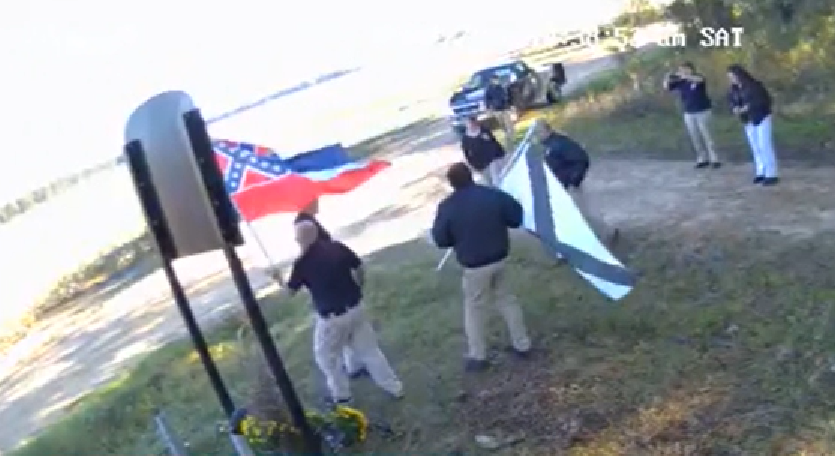 People carrying a white nationalist flag were caught on security cameras trying to film in front of a new memorial to lynching victim Emmett Till.

Patrick Weems, executive director of the Emmett Till Memorial Commission, told The Associated Press that the incident was captured Saturday by new security cameras at the memorial site in Mississippi. Security video from the commission shows the people, including a person carrying the flag of a neo-Confederate group, filming at the site. They are seen running away after a security alarm sounds.

In the video, a man can be heard saying they are at the memorial “that represents the civil rights movement for blacks.” “What we want to know is, where are all the white people?” he continued before the clip ends. The group was carrying a white flag with a large cross, a symbol associated with the League of the South.

The Southern Poverty Law Center has described the League of the South as a neo-Confederate hate group. 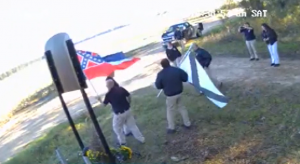 “They basically showed a group of people coming out and filming what looked to be some kind of propaganda video at the historic marker,” Weems said.

Till was 14 when he was kidnapped, beaten and killed in 1955 after he allegedly whistled at a white woman. An all-white jury in Mississippi acquitted two white men of murder charges. The memorial is at the site where Till’s body was pulled from the Tallahatchie River.

The camera system and alarms are part of an updated security system that accompanies a new bullet-proof memorial to Till that was dedicated Oct. 19. The bulletproof sign and security measures come after the first three markers were vandalized.

The first historical marker was placed in 2008. Someone tossed it in the river. The second and third signs were shot at and left riddled with bullet holes.

The commission is trying to raise money for a permanent memorial site and received some donations after the video was discovered.