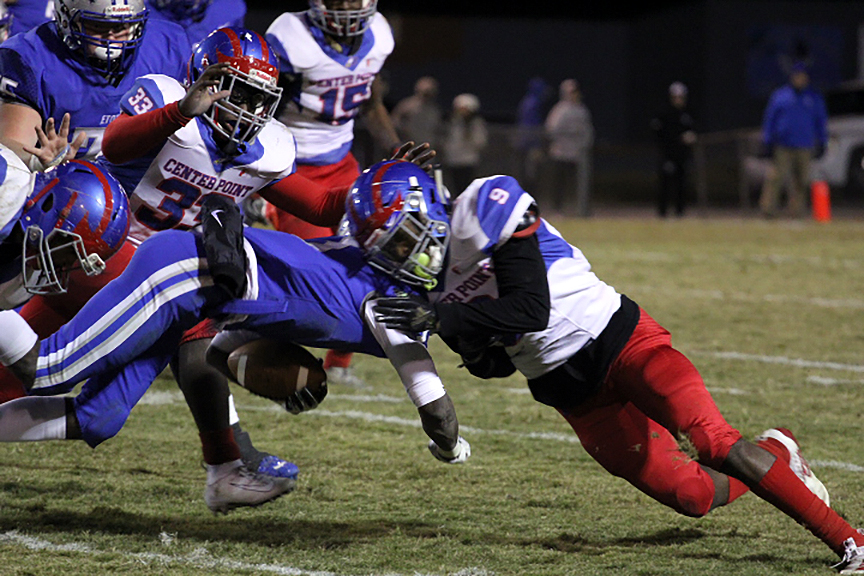 ATALLA – A season spent traveling throughout the state paid off for Center Point on Friday as the Eagles defeated one-seed Etowah, 42-13, in the first round of the AHSAA Class 5A state playoffs to set up a matchup against Scottsboro in the second round.

The Eagles have had seven road games this season; Center Point is 5-2 in those games.

The desired outcome was never in doubt for Center Point as the Eagles punched a hapless Etowah squad in the mouth from the onset. 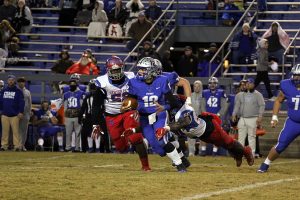 Despite temperatures hovering around freezing, the Eagles entered the evening loose following a two-week gap in between games following the loss to Central Clay County on Oct. 24 to conclude the regular season. That bye week was instrumental in rejuvenating an Eagles squad that finished the year 1-2 after five consecutive wins.

Tasked with handling an Etowah team that entered the night 9-1, the Eagles knew that they had to get the jump early on the Blue Devils. That is exactly what they did. On Center Point’s opening drive, the Eagles drove down the field and scored on a 2-yard Jayson Jones touchdown run to give Center Point the 8-0 advantage with 9:48 left in the first quarter (Center Point only attempts two-point conversions).

“My old man told me a long time ago that on the road you must be able to run the ball and you’ve got to be able to play defense,” Center Point head coach George Bates said. The Eagles took that adage to heart: The Eagles recorded 293 yards rushing and held Etowah to just 183 total yards.

Just minutes later, Center Point scored yet again after Jaylen Taylor capped a drive set up by a 40-yard catch from Harold Holloman with a 3-yard touchdown plunge to extend the Eagles’ lead to 14-0.

The rout was then on.

“When you’re a four seed versus a one seed, the thing that you have to do is start fast,” Bates said. “If you’re the four seed and the one seed is up, these (kids) kind of feel like, ‘Oh, man. This is supposed to happen. We’re not supposed to be here.’ One thing that we try to tell them that it’s just a number. When the game starts, nobody cares about the season anymore. Just come out and do what we do. Tonight, it worked out for us.”

Etowah did have a chance to set up at Center Point’s 4-yard line with a first and goal as time expired in the first quarter, but the Eagles’ R.J. Orr knocked down a pass on third down to force an Etowah punt.

From then on, Center Point just added fuel to the fire. After Jones converted on a fourth and five with a fake punt, Troy Bruce carried the Eagles to pay dirt on a 50-yard run followed by a 25-yard touchdown run to increase Center Point’s lead to 20-0.

The Blue Devils attempted to make things interesting after a 10-yard touchdown pass to Ollie Finch narrowed the Eagles’ lead to 20-6 with 4:59 left in the first half. However, Center Point would utilize all of the remaining four minutes left on the clock to score on a 13-yard touchdown catch by Orr with 33 seconds remaining in the half.

Now facing a 26-6 deficit against a No. 4 seed following a one-loss season is never ideal. Add on the fact that the Blue Devils averaged 36 points per game this season and had just six points at the half, and you have the perfect concoction for a less than pleasant night.

Undaunted, Center Point’s defense, which locked down the highest scoring offense in Region 6 all evening, forced an Etowah three-and-out midway through the third quarter. The Eagles’ offense then methodically marched down the field chewing up the clock in the process.

“Offensively, we did not want to throw the ball more than 10 times,” Bates said. The Eagles achieved that feat.

As the clock turned over to the fourth quarter, Jones scored on a 2-yard run to give the Eagles the 34-13 lead. Everything after was just icing on the cake for a Center Point team that witnessed its top spot in Region 5 slip away in the final week of the season.

“People want to put an emphasis on certain players,” Bates said. “Overall, it’s a team effort. Tonight, we dressed 43 kids. It’s not like we have a lot of kids to pull from. Everybody has a job. We tell these kids that they fall in either one of three categories on our team: starter, a contributor or you’re an encourager. If you’re not in one of those catagories then you’re not with us.”