GRAYSON VALLEY — A child was dropped off at the Center Point Fire District after a passerby said she saw him walking near Chalkville Mountain Road.

Nikki Gadbaw said it was just by chance that she saw the child as he was walking near Martin Road, around 8:30 a.m. Her original plan, Tuesday morning, was to go shopping at Publix, but when her low fuel light came on in her car, she had to make an extra stop. Little did she know, there would be a second unplanned stop.

“My daughter and I saw this little boy running down the street and I thought, ‘Well, that’s not something you see every day,’” said Gadbaw. 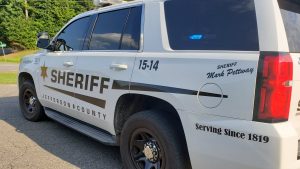 As she stopped her car, she got out in below-freezing temperatures and asked the child where he was going.

“When I stopped, I looked back and he ran in the street. I got him to come towards me and he got in the car and buckled up,” she said. “I wasn’t a stranger to him, although he didn’t know me.”

Gadbaw said the child looked to be around 5-years-old. He was dressed for cold weather, with a winter coat and pants, but there was something that wasn’t quite right about his clothing.

“He had on warm clothes, so he was prepared to go outside, but he had on someone else’s shoes because they would’ve fit me, an adult, instead of a 5-year-old,” said Gadbaw. “He said he wasn’t hungry, but they gave him fruit and he ate it.”

Being a mother herself, Gadbaw sprung into protection mode and got the child out of the cold and into the nearest fire station. The Center Point Fire District Station 5 immediately went out of service to tend to the boy.

“They asked him questions and he knew he went to preschool. He even knew he lived somewhere behind the fireworks stand,” said Gadbaw.

Center Point Fire District Chief Gene Coleman said the fire department called the Jefferson County Sheriff’s Office to assist with finding the child’s parents. After a short search of the area, the parents were located and the child was returned home. Coleman said he is thankful this story has a happy ending.

“Fortunately, he wasn’t abducted,” said Coleman. “He was going to Dollar General to buy some pirate toys. It turned out really well for the amount of traffic that’s on that road. It could’ve been really tragic.”

As for Gadbaw, she is also thankful that she was in the right place, at the right time.

“I could not believe what had just happened. I just feel like we were in the right place and where we were supposed to be,” Gadbaw explained.