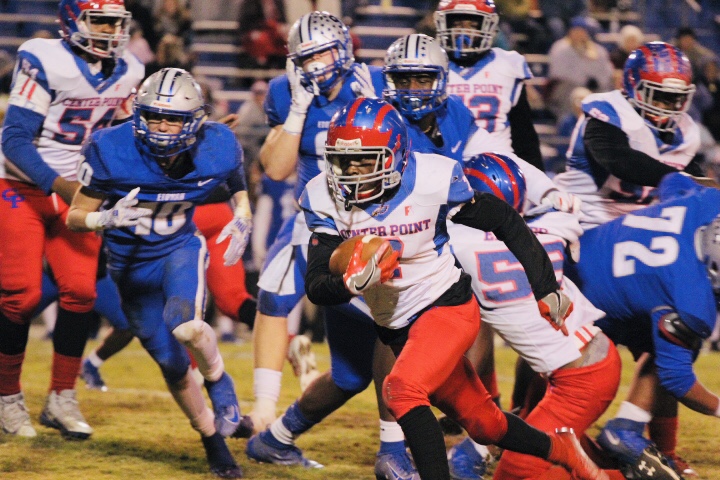 CENTER POINT — The road to the quarterfinals runs through Center Point this Friday when the Eagles return home to face Scottsboro in the second round of the 2019 AHSAA Class 5A state playoffs.

Center Point will host a home game for just the fifth time this season. It will be the first home game for the Eagles since the beginning of October. In that span, the road warriors went 2-2 with their most recent victory coming at the expense of No. 1 seed Etowah in the first round of the playoffs. 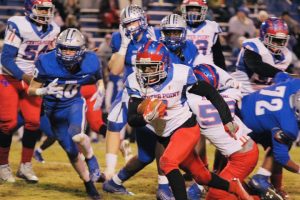 The Eagles returned to form against the Blue Devils following a stumbling finish to conclude the regular season in what amounted to a 42-13 thrashing of the Region 6 champions.

Behind a potent run game led by Jayson Jones and Troy Bruce, the Eagles recorded 293 rushing yards on the night. That, along with an Eagles’ defense that allowed only 183 total yards, propelled Center Point into the second round for the second consecutive season.

“My old man told me a long time ago that on the road you must be able to run the ball and you’ve got to be able to play defense,” Center Point head coach George Bates said.

That adage will need to carry over as the Eagles get set to face a Scottsboro team that dispatched Russelville, 17-14, in the first round.

The Wildcats concluded the 2019 regular season 8-2 and in second place in Region 8 behind Madison County. With this past Friday’s win, Scottsboro has now won five straight games and nine out of its past 10 games.

The two teams have not faced since the 1995 season. Center Point defeated Scottsboro, 31-14.

The Wildcats will make the trip south boasting of an offense that averages 27 points per game. However, Scottsboro has been wildly inconsistent this season. The Wildcats have scored 30 or more points in five games this season, but they have four games where they scored less than 20 points.

In its past two games, Scottsboro has scored just two touchdowns per game in close victories over Hartselle and Russellville.

Center Point’s offense has followed much of the same trend. Against teams that are defensively sound, the Eagles have had a difficult time harnessing their athletic abilities. Against Central Clay County, the Eagles struggled to stretch the field and had trouble claiming the trenches in the second half.

The Eagles solved that problem against Etowah as Center Point overwhelmed a Blue Devil defense that had allowed just 20 points per game entering the night.

As Bates said, the key to victory will be if Center Point can establish its run game from the onset and if its defense can rattle the Scottsboro offense early in the game.

Should Center Point stay true to form, Scottsboro will have its hands full corralling an offense that loves to spread you out and let its playmakers have room to roam.