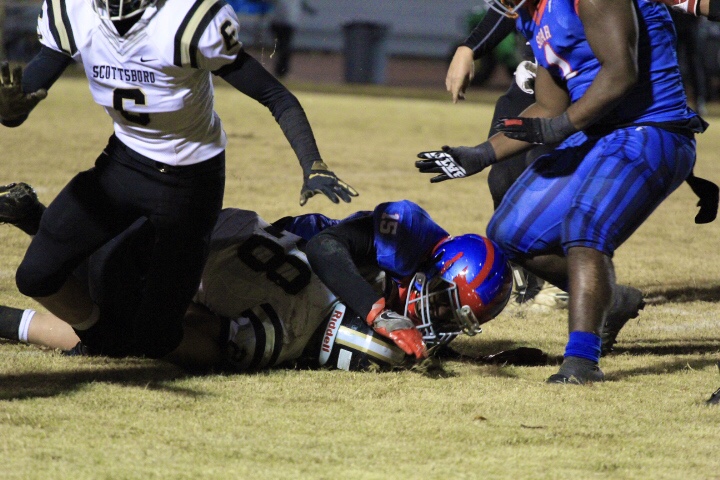 CENTER POINT — On the first play from scrimmage in the second round of the 2019 AHSAA Class 5A state playoffs, Center Point gifted visiting Scottsboro the ball on the Eagles’ 14-yard line after a fumble drove a dagger into the heart of Center Point’s desired fast start.

Unquestionably frustrated, Center Point was now tasked with halting a Scottsboro offense frothing at the mouth at the prospect of jumping out ahead of the Eagles and enacting its methodical gameplan designed around pounding the ball and bleeding the clock until the defense caves.

However, Center Point’s defense was having none of that nonsense.

Buried under headlines that focus more on the explosiveness of the offense, the defense has ridden shotgun all throughout the season. Yet, most people are unaware that the defense has been the lifeblood of the Eagles. The unit has allowed just 20 or more points in just four games this season, and they have not allowed a team to score 20 or more points since Sept. 27.

Facing odds that even a drunk betting man would frown at, the Eagles’ defense was tasked with halting what seemed to be an inevitable Scottsboro touchdown.

The Eagles’ defense came through, as the unit has done all season long. 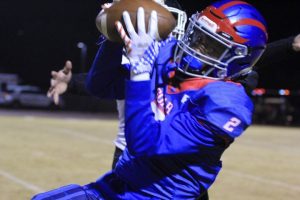 Scottsboro’s one-dimensional offense was unable to capitalize on the Center Point turnover. Facing a third and two, the Scottsboro running back ran into defensive lineman DeCarrius Hawthorne, who threw him back for a loss, forcing the Wildcats to settle for a field goal. At that moment, the tone was set.

Behind the defense, and an offense that turned to the long ball, Center Point booked its ticket into the quarterfinals after defeating Scottsboro, 26-10, on a chilly Friday night before a sparse home crowd.

“Last week, we tried to impose our will,” Center Point head coach George Bates said. “This week, it was take what the defense gives us. They loaded the box. They sent some pressure. They had seven or eight-man boxes. We just, at that point, took a shot with our athletes.”

Facing its first deficit in the playoffs, Center Point took what Scottsboro offered defensively and decided to unleash its passing game. With 2:19 left in the first quarter, quarterback Javon Davis hit R.J. Orr from 30 yards out to give the Eagles the 6-3 lead.

Center Point would open the second quarter with yet another fumble, but once again, the Eagles’ defense held firm, forcing another turnover on downs after Scottsboro’s fourth and four attempt failed. The Eagles’ offense would make the Wildcats pay soon thereafter as Davis connected on his second touchdown pass of the night on a 15-yard swing pass to a wide open Troy Bruce to extend the Center Point lead to 12-3.

The Eagles’ offense returned to the field with 1:03 left in the first half after yet another Scottsboro turnover on downs. After a 30-yard Davis to Tamarkus Judkins connection set the Eagles up at the 1-yard line with 10 seconds to go, Jones would plunge in for the touchdown.

Center Point headed into the half leading, 20-3.

Scottsboro opened the second half with a five-minute drive that stalled on the Eagles’ 19-yard line. Despite trailing by 17 points, the Wildcats seemed rather content to slowly march their way down the field. Without a respectable passing game, Scottsboro’s chances of rallying behind a failed running attack were slim at best.

“We have a pretty good defense,” Bates said. “We play about six or seven seniors there. Our back end is kind of young, but our front has older guys. Not many people talk about our defense, but I think we’re giving up about 15-and-a-half a game.”

The Wildcats’ odds of mounting a comeback took a hit midway through the third quarter when Orr hauled in his second touchdown of the night after a 26-yard touchdown pass from Davis gave the Eagles a 26-3 lead.

Scottsboro did manage to score a touchdown with just under four minutes left in the game; however, it was too little too late by then.

Center Point next will travel to face Mortimer Jordan in the quarterfinals in what will be a rematch between the two teams. Center Point won the regular season contest, 28-21.

“If their number is small, and our number is big, we’ll be OK,” Bates aptly said.