FAIRFIELD — Pinson Valley’s run through the 2019 Heritage Thanksgiving Classic came to an end Wednesday evening as the Indians fell to Huffman, 87-74, in the championship game.

The Indians now sit at 4-1 on the season.

The reigning Class 6A champions opened the annual tournament with dominant performances against Jefferson Davis and Woodlawn. In the first round, Pinson Valley rode Kameron Wood’s 48 points and Camron Scott’s double-double (17 points, 10 points) in the victory over Jefferson Davis on Monday. 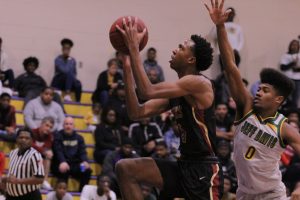 The Indians returned to Fairfield High School on Tuesday and rallied to defeat Woodlawn, 76-66, in the quarterfinals. Woods, the 2019 Class 6A player of the year, scored 36 points, while Scott notched yet another double-double (10 points, 11 rebounds).

Pinson Valley needed a Wood’s 3-point dagger in the final seconds of the game to down Fairfield, 67-64, in the semifinals on Wednesday. Woods scored 36 points and JoJo James added 18 points and 8 rebounds.

Later in the day, the Indians returned to the hardwood for the championship game. In the loss to Huffman, Woods scored 27 points. James added 24 points and Scott recorded his third double-double of the tournament with 11 points and 13 rebounds.

Woods averaged 36.7 points in the tournament.