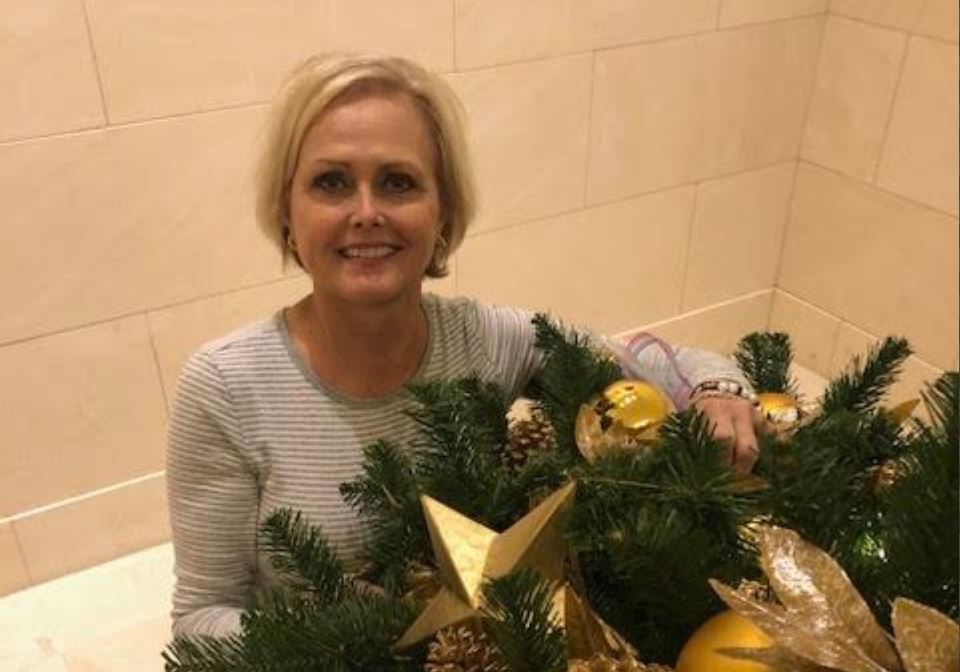 TRUSSVILLE — It’s beginning to look a lot like Christmas and just as the old song goes, everywhere you go the markings of the holidays are popping up and guiding us through this season of joy, warmth and love. For one Trussville resident, it is also a time to remember five wonderful years spent performing a dream job. From 2003 to 2008, Kaleen Riley was part of a very special and very select team that decorated the White House for Christmas.

For Riley, who has a long history of decorating and freelance design, the opportunity was part chance and part having spent years accruing the necessary skills and expertise.

“I got to go on a tour there (the White House) one spring break with my family,” said Riley. “My brother-in-law, he was connected to Walter Reed Hospital at the time, scheduled a tour for us, and I just pulled the tour guide aside and asked how you get there (The White House) to work. The guide said it was on a volunteer basis and thousands of people apply. I gave him a little bit about my background and he said to give a resume to him and he would see what he could do.” 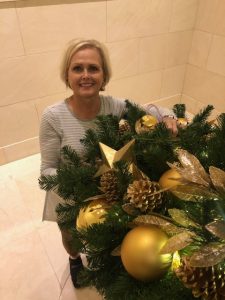 Riley forwarded her resume. About six months later, she was called by the head White House florist. She was one of 50 chosen to decorate the White House for Christmas. Riley was invited back every year for the remainder of the George W. Bush presidency.

The work of decorating the White House began in a warehouse, one week ahead of time.

After the necessary preparations were accomplished, Riley and her team set to work trimming the White House in holiday cheer.

“My team and I, we had security clearance to be on the whole main floor decorating,” said Riley. “We worked in Cross Hall, the East Room, State Dining, the Red Room, the Green Room, just all over. Our team did specific things. We decorated with garlands, ribbons, bows, ornaments and wherever they needed us.” 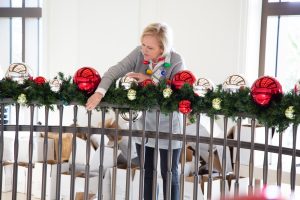 Although fulfilling and a thrilling opportunity that most people will never get to experience, the business of decorating the White House is one that demands no little amount of hard work.

“It took us three days to set up the White House. Three, 15-hour days,” Riley remembered.

In many ways, that hard work was its own reward. However, there were other benefits, such as meeting the most powerful person in the world and finding him to be a gracious and down-to-earth man.

“My favorite memory was meeting President Bush,” explained Riley. “I loved meeting him. For the three days that I was there, we were walking around with his group of people and it was so neat! I’d see him out there playing with the soccer ball with Barney and Miss Beazley (the Bush’s family pets). They are great people, very warm and very hospitable. The opportunity there was just so great, I got to do some great things. I felt like it was just an honor for me to represent my town.”

The American novelist F. Scott Fitzgerald said there are no second acts in American lives; but, he never met Kaleen Riley.

Just about 10 years after her last Christmas decorating the White House, Riley was invited to the opening of the Bush Presidential Library in Texas.

“Mrs. Laura Bush made sure that we were invited back for the official opening of the library. To get invited back, with my original team, 10 years later was just so awesome,” said Riley. 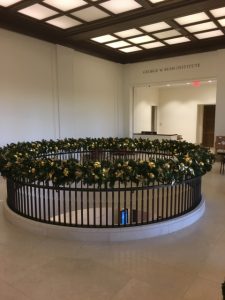 That wasn’t the only surprise the former first lady had for Riley and her team.

“Mrs. Bush hosted a breakfast for us,” said Riley. “We gathered in our room at a meeting area in the Bush Library. We got tagged and our security thing going and caught an elevator to go onto the main area and Mrs. Bush was waiting for us and it was just such a nice surprise. She recognized us and we got to chat for a minute. Mrs. Bush was just so warm and very kind and was so thankful that we had come up.”

In addition to hosting them for breakfast, Mrs. Bush had a very specific task she wanted Riley and her team to perform. She wanted the team, over a period of five Christmas seasons, to recreate the White House Christmas decorations that they had originally installed from 2003 – 2008. The team began their task in the 2018 season and will continue over the successive years. It is a very specific job, one that only Riley and her team can accomplish.

In recounting her story, Riley contains all the grace and the humility that she finds to be so inspiring in the former President and First Lady.

“This is not about me,” said Riley. “This is about dreaming a dream and being able to do it. Who would have thought? It was just the right path and the right people that got me to this wonderful opportunity. It was just a blessing. I just consider it an opportunity to serve.”

Riley hasn’t stopped working for the Bush family. In fact, she recently decorated the Bush Presidential Library for 2019 and had dinner with President George W. Bush and former First Lady Laura Bush. She returned from the trip to Dallas, on Wednesday, Dec. 11.