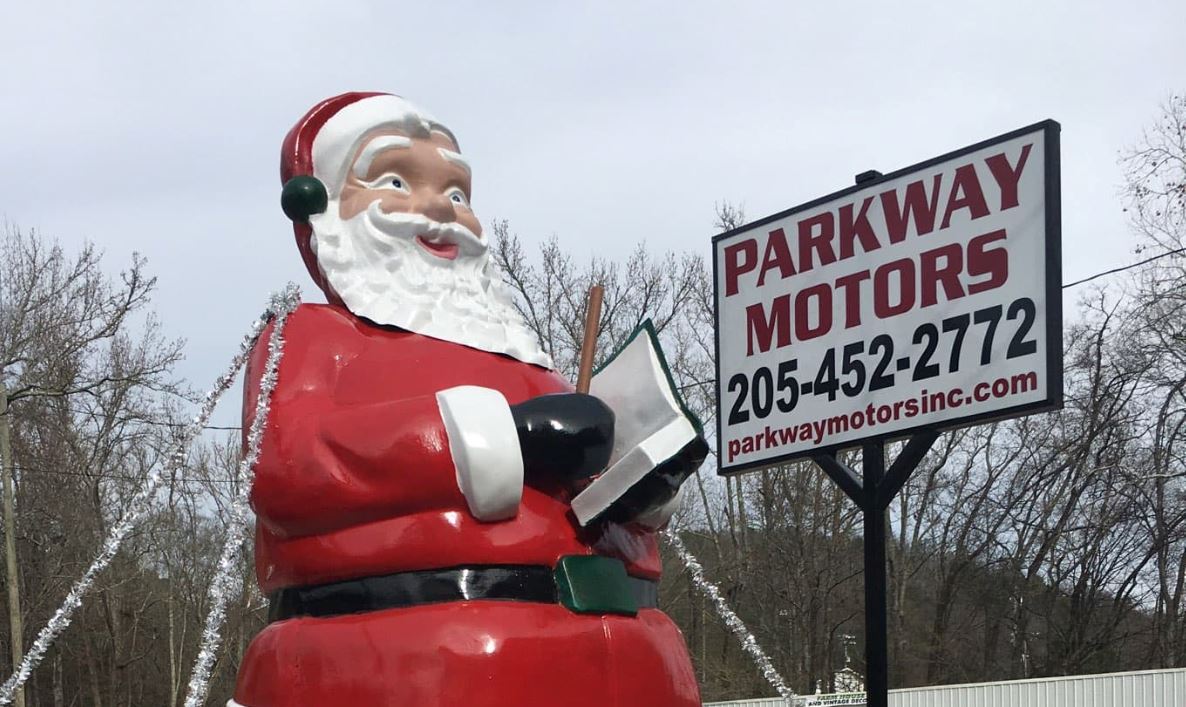 SPRINGVILLE — Many people in east Jefferson County probably remember the large Santa Claus statue on Center Point Parkway. For nearly half a century, the big red man stood tall and shiny for all to see. But in his 50th year, Santa has made a big move.

We will tell you about that, but first, let’s go to the beginning: It all started in 1969. The Santa stood atop a ’69 Dodge Rambler Station Wagon, holding a sign. It was part of a sales promotion for Roebuck Dodge.

In 1969, the area was busy with the hustle and bustle of families driving to and from their favorite restaurants and shops. The close-knit communities and neighborhoods along the parkway were known for their pristine yards and cookie-cutter facades. Even before the Santa Claus statue went up every year, you couldn’t help but glance over at the shiny new Dodge Chargers, lined in a row, just waiting for their new owners to pick them up and put the pedal to the metal. But once Santa Claus came to town, he became the focal point of the dealership during the most wonderful time of the year. 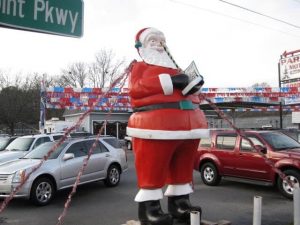 Like many adults in the area, Robert DeRamus has childhood memories of the 15-foot tall, fiberglass Santa.

“I can remember when I was a kid, driving by there before my dad went to work there and seeing that thing and it was just gigantic,” said DeRamus.

It wasn’t long before a new family came forward with an interest in buying Dodge Roebuck. Joe Bruno bought the dealership. Joe and his brother Jim had one stipulation. They wanted to keep Santa. So, Santa stayed with the Bruno’s for many years. Even after they got into the used car business around 1980, they stayed faithful to jolly ole’ St. Nick. They kept bringing Santa out every year at Bruno’s Automotive, which was just across the street from the old Dodge dealership.

One year, Santa was listed on a scavenger hunt for students at Erwin High School. DeRamus said there was a plan to hijack Santa as part of a prank. Word got around to Jim Bruno and he took extra precautions, chaining Santa to a car. He also stood guard to ensure Santa would be safe.

Before long, people were so entertained by the statue, they started asking if they could rent the Santa. Of course, the answer was no. He had become a member of the Bruno family and their extended family. 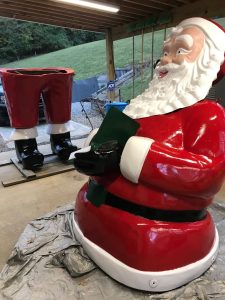 DeRamus himself became a part of that “extended family” by 1994. He worked for the Bruno’s for many years. He remembers getting together with other employees and preparing Santa for the season each year.

“We would all get out there together and paint him every year,” said DeRamus. “It was a tradition.”

Even Joe and Jim Bruno would come out to be a part of the annual painting.

One year, a lot boy nicknamed “Shorty” took on the task of painting the Santa. Shorty had been with the Bruno’s for a long time. He was an old soul but always seemed to get himself in a pickle.

“He was at every family function we had,” said DeRamus. “We knew he was going to mess things up or tear things up, but we expected that and it didn’t bother us.”

So, as if going along with his reputation, Shorty didn’t disappoint when it was time to paint Santa.

“He made such a huge mess, he messed up Santa’s face,” said DeRamus. “He got the wrong color on his face. Jim Bruno had a fit!”

Bruno went into damage control mode and bought several colors and mixed them to fix Santa’s face. But, according to DeRamus, the mess up was too much to cover up.

“I went out there and said it looks like Santa has a sunburn,” he said. “It was nearly pink.”

With the painting of the Santa, came a new tradition. Santa was no longer holding a sign. Instead, he was holding a naughty and nice book. His pencil, made out of a broom handle, even had feathers to mimic an antique pen. DeRamus remembers how the new tradition of writing the names of children in the book came about.

“My wife was pregnant with our first son and he didn’t have a name yet, so ‘Little Rob’ was written in there,” said DeRamus. “So it became a tradition that when anyone had a child or grandchild, we would write their name in the book.”

Even in hard times, Santa was there to put smiles on faces, according to DeRamus.

“He became a staple,” said DeRamus. “There was one year that business wasn’t very good and spirits weren’t good. We were dragging about putting him up and everybody in the community started calling us.”

So, although they didn’t paint Santa that year, they did get together and bring him out of hiding to bring Christmas cheer to passersby.

DeRamus said over the years, he has had to repair parts of Santa. In fact, he has even had to re-bolt his head after it became loose. But all of that work has far exceeded the sentimental value of the statue.

“We have done some repairs over the years but he’s just made it over so many years and through so many families,” DeRamus said.

Eventually, Jim and Joe Bruno retired and DeRamus and his father bought the car business. The large Santa statue was passed down with the business.

“He’s just been part of the family, so-to-speak,” DeRamus said. 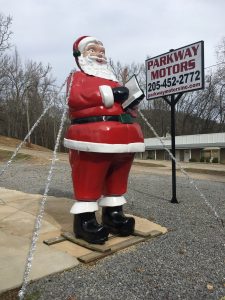 In 2019, DeRamus moved his business to Springville and Santa and his naughty and nice book moved with him. Along with the move, Santa got a complete overhaul.

DeRamus hopes Santa continues to put smiles on the faces of children and adults for years to come.