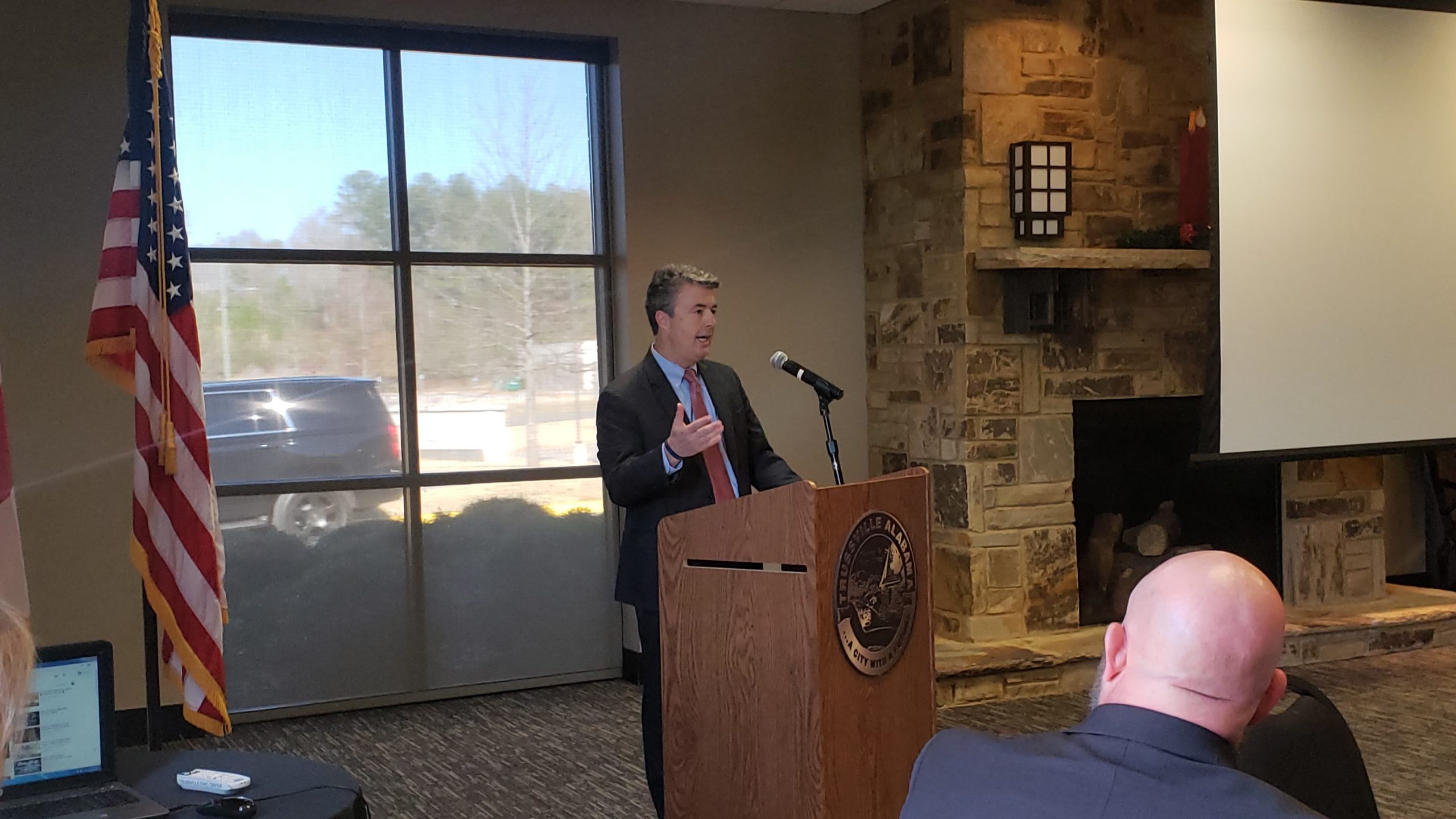 TRUSSVILLE — State Attorney General Steve Marshall was the featured speaker at the monthly luncheon for the Trussville Area Chamber of Commerce on Thursday, Dec. 19, 2019.

Marshall spoke to the crowd about several topics including Alabama prisons, the opioid crisis and recent deaths of law enforcement officers from across the state.

“This has been an awful year for law enforcement,” said Marshall. “We have now lost seven in the line of duty.” 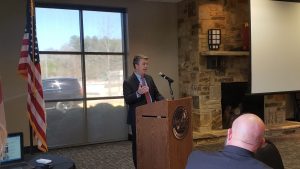 “Every time it happens is a reminder that our law enforcement isn’t appreciated enough,” Marshall said. “We take them for granted even during this Christmas season when we’re with family, there are going to be people in this department that are working.”

Marshall said one of the most difficult moments was when he met a 4-year-old child that lost her father, who was a police officer.

“I was able to sit with her and tell her that her father was a hero. She looked back at me and said, ‘Daddy won’t talk to me anymore,’” said Marshall.

Marshall said if you count the K9 killed at Staton Correctional Facility this year, the number of officers killed is eight. K9 Officer Jake was killed after conducting a contraband search in July.

The Attorney General said while there was a reduction in violent crime over the past year, there has been an increase over the past 10 years, meaning there is still more work to be done when it comes to fighting crime in Alabama.

Marshall touched on the state’s overcrowded prisons and issues being discussed within the prison system. He said there is work to be done in prisons, but releasing violent offenders is not the answer.

“The reality is, right now our prison system is 78% violent offenders,” said Marshall. “You’re not going to jail in Alabama right off-the-bat just because you stole somebody’s copper wire.”

Marshall said the state has protocols set up to where a non-violent offender would have to be in the system for a while before being sent to prison.

“I want to remind our decision-makers, and that’s our governor and our legislators, that the majority that is there needs to be there because it’s an issue of public safety that we have to recognize,” said Marshall.

Marshall said in the past, violent offenders have been released too early, leading to more crimes and pain for families of victims.

“We ask these families to come to Montgomery and protest the parole,” said Marshall. “They are reliving that crime over and over again. It’s bad enough when they’ve got to come when the time is right, but when we do it far too early, that’s not something that can be excused.”

Since changes to Alabama’s Board of Pardons and Paroles, Marshall said he has been pleased with the results.

“In reality, there are people that should be paroled,” Marshall added. “They are taking advantage of the resources available inside the prison and doing what they’re supposed to do. But they ought to be paroled because they’ve earned it.”

Another issue Marshall said his office is focusing on in the state is human trafficking. The office has shut down illegal massage parlors and has focused on truck stops as a place to gain intelligence and investigate crime rings. The AG also helped take down Backpage, a website known for promoting prostitution and other illegal activity.

Attorney General Marshall also spoke from a personal standpoint on how the opioid crisis has taken lives in the state of Alabama. It has been a year and six months since Marshall’s wife took her own life after struggling with mental illness and addiction. The story, which Marshall felt forced to tell in 2018 after media reports included details of his wife’s suicide, is a story many Alabamians can relate to.

Bridgette Marshall suffered from migraines and was given prescriptions to stop the pain. In the end, she was unable to continue her fight. On June 24, 2018, Bridgette Marshall took her own life. The loss gives Steve Marshall an added push to end the crisis in our state.

“She struggled and I watched her struggle, so I knew we had to make a difference on that problem,” Marshall said.

Marshall reported that prescriptions for opioids have reduced by 23% in the past five years. Marshall credits the medical community for taking a proactive stance in the fight against opioids.

The state has also filed litigation against distributors and manufacturers to recoup monies lost during the peak of the opioid crisis. That trial will begin in July 2020.

Marshall said the one thing he gets asked about everywhere he goes is ending illegal robocalls.

“If I wanted to be king, one problem I could solve would be robocalls,” he said.

Marshall said he has worked with 34 other states and the Federal Trade Commission to end illegal robocalls, but he says it is still a work in progress.

“The bad guys have better technology than the good guys,” Marshall said. “These calls aren’t coming from Springville and Argo. They’re coming from North Africa, Asia and Eastern Europe. As soon as somebody believes their son or daughter is in jail somewhere and needs bond or that they have won the lottery but have to pay the $5,000, whatever that scam is, by the time they have hit send it’s too late and we can’t get to the bad guys.”

You can report international scam callers by clicking here.