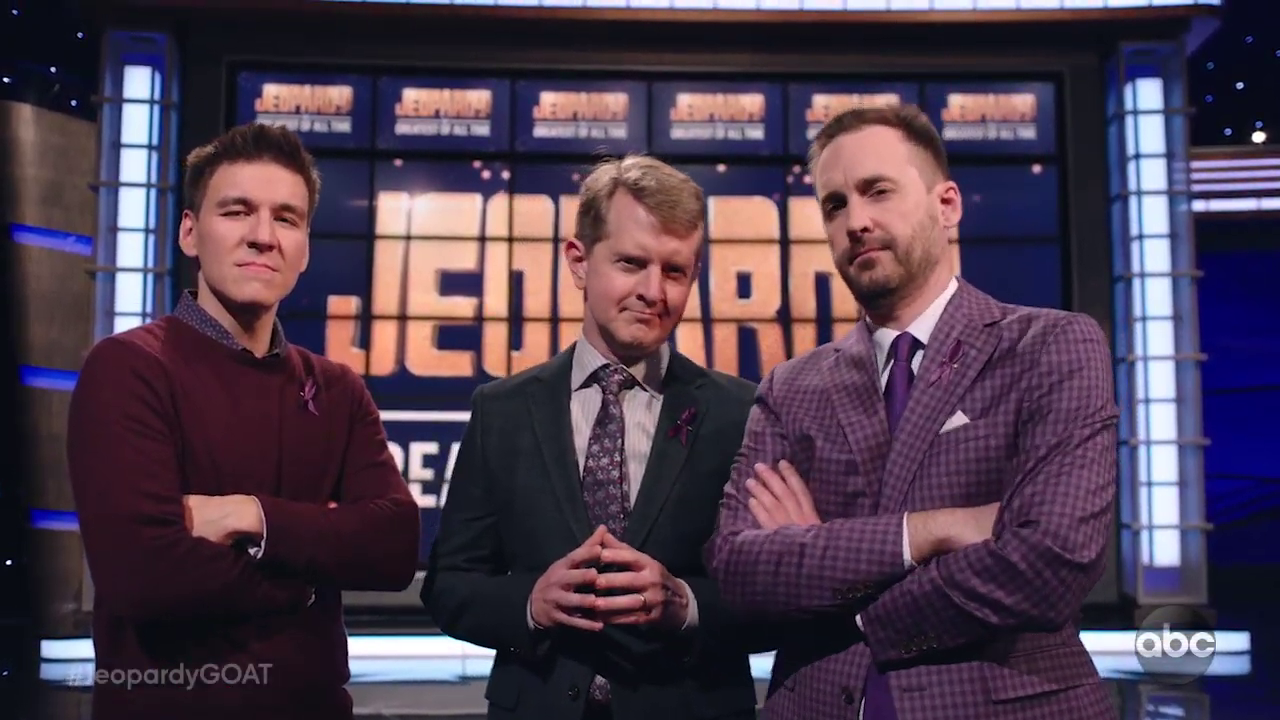 Jeopardy! Greatest of All Time Tournament kicks off tonight

Fans of Jeopardy! are in for a treat on Tuesday as the beloved show introduces a new tournament that pits the show’s three most successful contestants together for a three-day event that celebrates the show’s 30th anniversary on ABC.

The “Greatest of All Time” tournament will include all-time wins champion Ken Jennings, professional gambler and 32-game winner James Holzhauer, and top earnings winner Brad Rutter, who has won $4,688,436.

Jennings won an astounding 74 consecutive games, while Rutter has won five tournaments and has never been defeated by a human opponent — Rutter competed in six tournaments and won all of them, except the IBM challenge. Holzhauer almost equaled Jenning’s total prize money in just under half the amount of games that Jennings participated in — Holzhauer earnings reached $2.46 million during his 32-game winning streak.

The winner will take home one million dollars. Both the second and third-place finishers will walk away with $250,000.

The format will consist of two back-to-back games each evening. The winner of each evening will earn one point. The first contestant to reach three points wins the tournament. The tournament resembles that of a best-of-seven series, which can last anywhere between three and seven days.

The thing to watch will be who is consistently fastest to the buzzer: Jennings won 61.45% of the buzzer presses during his 75-game run, while Holzhauer hit the buzzer first 57.81% of the time.

Holzhauer, who is favored to win the tournament, is riding the new wave of Jeopardy! strategy. Part of his dominance lies behind targeting the high-value clues first and wagering the largest amounts of money whenever he can. Jennings, on the other hand, was slightly more conservative with his playing style. Jennings won $159.299 on Daily Doubles compared to Holzhauer’s $654,416.

The tournament also comes at a sobering time for longtime host Alex Trebek, who continues to fight his stage 4 pancreatic-cancer diagnosis and is contemplating retirement.

Schedule: Jan. 7-9, at 7 p.m. CT on ABC (more dates will be added as the competition progresses).

#JeopardyGOAT: Ken Jennings, Brad Rutter, and James Holzhauer are here in Times Square for their first live interview together ahead of @Jeopardy! The Greatest of All Time, Tuesday 8|7c on ABC. https://t.co/PiLMUtOnOr pic.twitter.com/4pHFunibDO