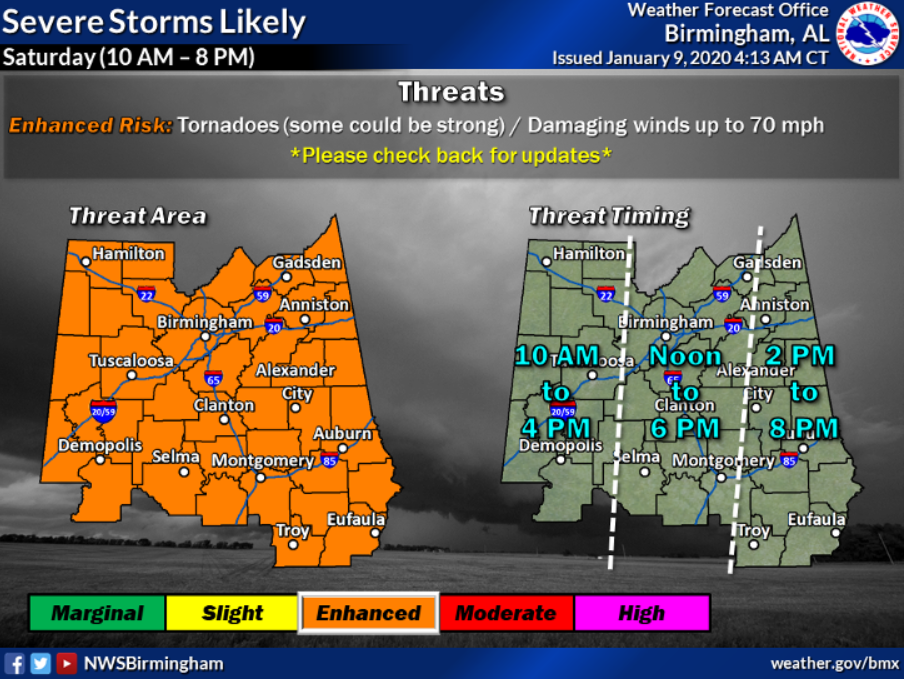 BIRMINGHAM — The National Weather Service in Birmingham is forecasting a severe weather system to hit Alabama in the daytime hours on Saturday, Jan. 11, 2020.

A few showers are possible Thursday night and much of central Alabama has been issued a wind advisory from midnight Friday until 9 p.m. Saturday. The weather service expects gusty winds that could blow down tree limbs and possibly knock down trees. Power outages are also possible during that time.

Saturday, forecasters expect significant severe weather, as temperatures reach into the lower to mid-70s. The NWS believes the severe weather will be capable of producing widespread, damaging winds and numerous tornadoes, including some strong tornadoes. 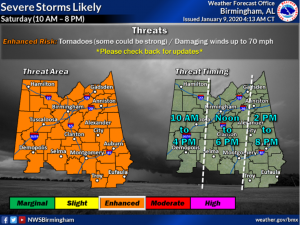 The greatest chance of wind damage is in the state’s northwestern counties, although the threat remains enhanced across central counties as well. The timing of the threat is expected to begin in the western counties around 10 a.m. Going east, Jefferson and St. Clair Counties, and the surrounding areas, should expect to see the system moving in from noon until 6 p.m. For eastern counties in Alabama, forecasters believe the threat will begin around 2 p.m.

The system is also expected to bring significant rainfall. Be sure to download The Trussville Tribune app from Google Play or the App Store to receive weather alerts and the latest on the system.